It’s heavier than the glowforge

I mean if you hit it with a fork-lift, maybe? it’s is very, very solidly sitting on the ground.

The ‘wideness’ is the chip tray (which weighs 18 lbs). The machine bolts from the bottom of the x-axis to the stand underneath. As @henryhbk said it’s on there and not going anywhere.

Mine sits on a custom stand which I had sitting on four hockey pucks. When I moved the machine a couple of months back, I had to hit the pucks with a dead blow to separate them from the floor.

it’s is very, very solidly sitting on the ground

Same thing happens to me when I’m flying a Cessna. Taking off banking more than about 15 or 20 degrees while climbing still makes me tense up because I can’t see over the nose. Landing I can virtually stand it on a wing tip and not think twice even though I should. I know the physics involved but I don’t feel it in my bones

Got the windows/doors on and lighting installed. Got the monitor cabling cleaned up, floor mat and cable mats down. Went to install the power drawbar (Thing that pulls the collet that holds the tooling up into the spindle) only to discover that my mill didn’t come with the drawbar installed (so nothing to attach the power drawbar cylinder to… 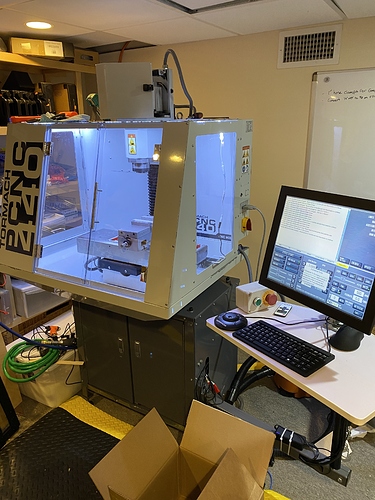 So what you’re saying is that it takes longer than 15 minutes to setup and do your first print?

Haha. Once it’s set up, not too horrible do do a job. Just putting the vice in took like 45 minutes the first time: because there is square and CNC square…

WE HAVE FIRST CHIPS (and coolant everywhere…). But that is mirror smooth! It was a test before running it on the first “real” job. 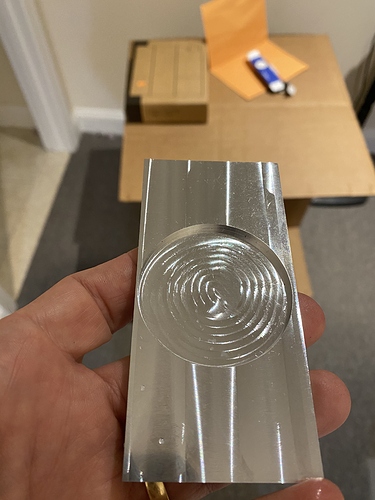 That kind of precision is always satisfying.

WE HAVE FIRST CHIPS (and coolant everywhere…).

You must be thrilled! Journeyman machinist here.

Now to cut some shields for the doors in acrylic to prevent coolant from streaming out, and around the tool changer…

Coolant is messy, especially in a basement.

Made good progress in getting it all up and running

A useful addition to your strainer (the one in the tray) is a green 3M finishing pad. It will strain out even small chips but won’t affect draining action. It’s easy to clean or replace. I get 3 packs at Home Depot and cut them up with scissors (I toss them rather than clean them, too lazy

Did you key your vice yet?

Are you able to build any of those pieces that folk are running so short of? Ventilators especially are hard to make on the Glowforge alone. @jamesdhatch also?

Ventilators especially are hard to make on the Glowforge alone.

Ventilators are probably outside the realm of most Makers. The creation of some splitters that allow sharing of a ventilator between 2 patients is probably doable (I’ve seen a couple of hospitals doing or planning to do that).

Faceshields can be made either fully on the GF as flat pack designs with headbands that wrap around your head & hook in the back. Or the headband can be done with 3D printing and the shield cut on the laser.

Respirators/masks can be 3D printed with FDM or SLA tech. Those are being designed to be used with replaceable filter media.

Cloth masks can be cut on the laser but sewn on a sewing machine.

Lots of options but they’re stopgap until traditional certified manufacturing catches up to demand. I’m doing some work for the local medical center but expect their requests to decline over the next month or so.

Ventilators are probably outside the realm of most Makers.

I would agree, but the two of you are beyond the realm of most makers. I have been wondering if given a C-pap machine for a source of clean air if a ventilator could be made that would do the rest of what is needed mixing O2 and providing the pressure/release needed.

Even without the extra O2 it would be a half measure that would beat no measure, and (IMHO) in the end, lack of ventilators will cause the most deaths as they are a last resort and the hardest to replicate.

I gather that Autoclaves are antiques now because “everything is just one use now and toss away” but I would hope that the fad in pressure cookers might alleviate some of that.

I have a lot of toss-away t-shirts printed for some now past project, and could cut them but have nobody to sew them,
also could cut face shields but would need materials.

Ventilators especially are hard to make on the Glowforge alone

OK, I get asked this question multiple times a day. No hospital (no really zero) will use your homemade ventilator (mostly because it would be illegal); but the lessons in decades of ventilator design have been written in blood. The notion of a “good enough” ventilator is better than no ventilator, is really an incorrect notion. It is easy enough to kill someone with a state-of-the-art magical sensor laden ventilator, let alone a sketchy one. What the general public doesn’t understand about pulmonary physiology is vast. If I want a “good enough” ventilator I can use a 3rd year med student with an ambu-bag.

I am on an international task force for critical care run by the ACCP, where these things are addressed. The whole tubing splitter (while certainly easy to make) is one of the most dangerous things you could do to a patient; in an emergency for like 5 minutes if a vent went down you might be able to support someone like that (although again, med student with ambu-bag works really well, and if you need more than 5 minutes: 2 med students…). Again ventilators are super complex and ventilating a patient is a complex task because you have to match the settings to the patient’s current lung function. So splitting the tube confuses the sensors (and if you understand lung physiology, you’d quickly realize that you can average compliance curves so one patient will be over and one patient under ventilated (i.e. a steal syndrome)

Faceshields can be made either fully on the GF as flat pack designs with headbands that wrap around your head & hook in the back. Or the headband can be done with 3D printing and the shield cut on the laser.

Respirators/masks can be 3D printed with FDM or SLA tech. Those are being designed to be used with replaceable filter media.

Although most of them wouldn’t pass a mandatory NIOSH mask fit test that we all do. And while people poo-poo regulations, when you are talking 0.5 micron particles the fit matters… The most dangerous part is that it gives people a false sense of security.