Powered on my GF for maybe the 5th or 6th time, make the the usual “clicks” as the stepper motors tried to home, then the carriage moved towards the front of the GF. The only problem is the ONLY side that moved at all was the left side. I was then alerted to the sound of a skipping belt/tooth grinding sound (I have 3d printers and have on occasion accidentally sent them out of bounds). 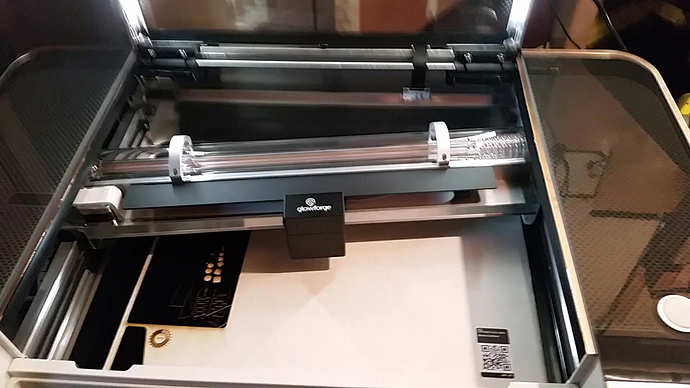 I lifted the lid to stop it, and the head rebounded to a position less skewed/twisted/crooked. I then powered it off and unplugged it, and carefully lifted the rear pair of grooved track wheels back onto their respective guide rails. I then proceeded to gently move the carriage front and rear to ensure it moved freely and wasn’t bound up.

After ensuring it was moving freely front and rear (Y+/-) and powering it back on, things did appear to function normally.

I have NOT made a subsequent cut with it, only powered it back up. Please advise how would you like me to proceed.

you will have to wait on support for this one I expect.
One thing you can look at is see if any debris from a previous project is present on that side, which may have jammed the guide or belts in some manner.
Just what I would do if this happened. We will have to wait it out for support to respond with official guidance.

Yeah I already checked for debris, and I can guarantee there wasn’t any. That was the first thing I looked for.

As you probably know, don’t contact them by email too, as that will slow down their response apparently.

when you powered it back up did it calibrate properly?
I got stupid once and had material extending off the tray slightly and that happened. Having seen an earlier thread with that issue, the user was advised to do what you did - and what I did, to replace the gantry back on the track.
I never had an issue after that with its operation.

The real question here is what caused it in the first place. In my case the reason was obvious, an obstruction.

The GF did self calibrate correctly and is currently in a “Ready” state.

After reviewing the picture I took, and taking into consideration what you mentioned, I suspect that might have been the problem I had. There was no debris on the track, or in or near the belt. However if you look closely it would appear that my workpiece of draftboard does appear rotated/skewed to the right towards the right carriage.

While the top right corner of the draft board doesn’t look to have caught on the front edge of the right carriage, I’m going to go peek under it to see if it would have caught on something (that’s past the leading edge, and more directly under the tube).

I think it best to err on the side of caution and wait to hear from support instead of listening to me, but personally, I would be tempted to run some tests to see if cuts and angles are straight.
If it wasn’t a machine malfunction, I think you will be OK. I ran the pre-release many hours after that incident and had no problems. (it sure freaked me out though!) If it was hardware related I don’t think testing it will change the resolution of the problem. It was an issue before you tested it.

Again, I can’t advise you officially.

I understand. I did inspect the underside of the carriage and there IS a fastener than protrudes about 1/8" towards the middle of the crumb tray. Which is enough for it to clear the front of the carriage but snag out of view. 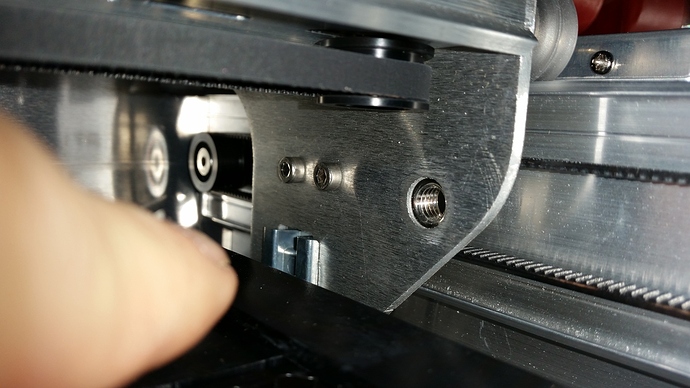 If you look very closely you can see a slight mark about 1/8" in from the edge of the corner of the draftboard. Here’s to hoping it was user error.

That being said I DO wish they’d have designed it with a vertical shield to prevent such an event from occurring, 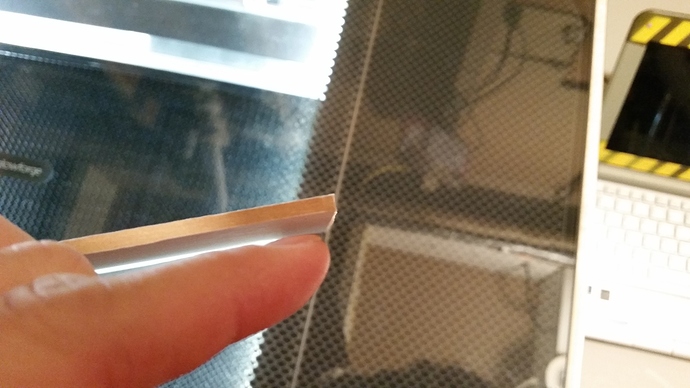 Whew! much better than an issue with the machine.

In my experience with the PRU over 8 months impressed me with the build of the machine. They are pretty robust, and the spring-loaded mechanism for the head and gantry carriages is simple, used across every CNC machine I have seen.

Yeah, I took my lesson! I’m positive to stay inside and off of that 1/8"lip on the edge of the tray.
I’m also careful to find the ‘crown’ of the material and face that down so that any warp in the material is up, and use magnets to pin those edges down.

If your material was up in that lip it is likely your material thickness would be wrong. Could cause a failed cut or poor engraves.

Since you’ve righted the laser arm, feel free to being printing again. If it happens again, please post a new topic or email us at support@glowforge.com.