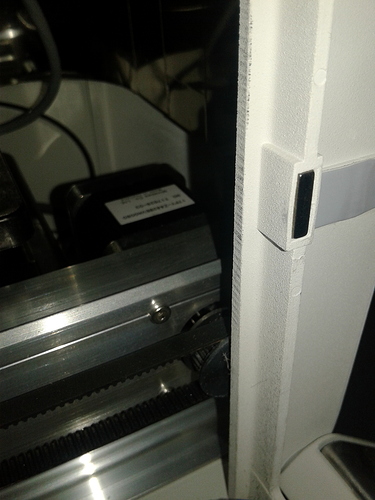 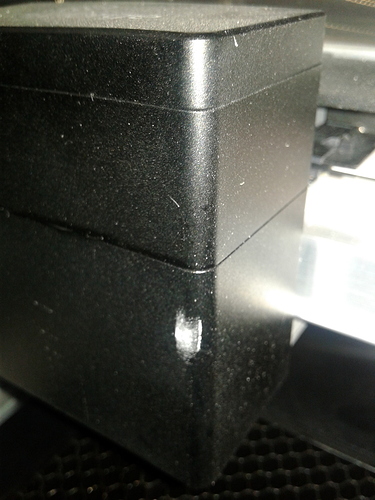 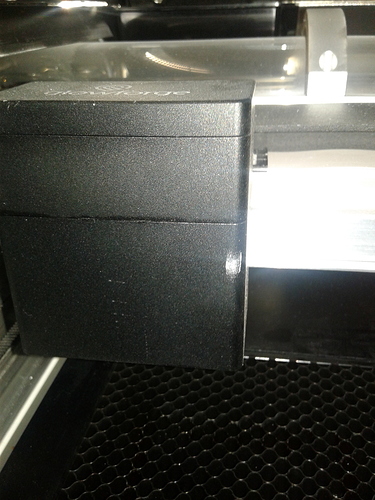 We’ve seen bumping at the front right on a few machines, but I think this is new (OK – it’s new to me). Obviously, I’d avoid cuts in that area until Support gets back to you, but in the meantime, I would check that the GF itself is sitting “squarely” on a flat and level surface and that the case isn’t torqued or twisted. For example, are the front door edges parallel to the matching case edges?

Edited to add: Once the head bumps, it will keep missing until the GF is powered off and you gently (slowly) move the gantry all the way to the back, making sure it’s parallel and the head is in the back left. Once you power the GF back up, it will of course calibrate and you should be good to go (other than in the front right). Do not attempt to move the gantry manually when the power is on.

Standard disclaimer: This is an unofficial, non-authoritative, but hopefully helpful suggestion. Best of luck! 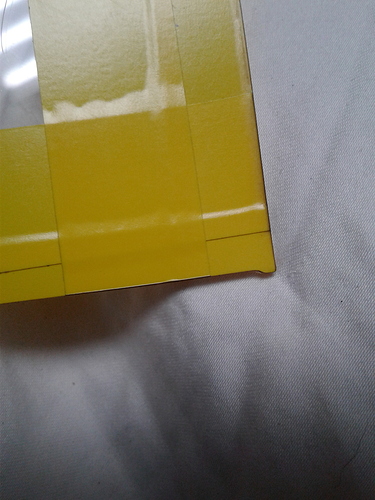 Still no response from customer support?? It has been 21 days since I first posted this issue.

I would be compelled to tag @Rita, @dan.

@dan … @Rita …, is there a solution for this issue? I also have the same alignment issues as others have posted about where there is unusable bed space displayed on the bottom & right sides of the gfui screen. This then reduces the actual usable space on the top and left sides of the material. I made a max cut size square and centered it in the gfui workable(cut) area, and this picture shows the resulting difference in the placement as shown in the gfui. Glowforge.pdf (638.2 KB)

You will need to take a picture with the app rulers to see if the proper usable space is provided. All machines have unusable space at the top and left. Most machines including mine show extra space on the bottom and right that cannot be used. The important part is that the current usable 11"x19.5" space is in the field of view. That view may change at a future date via S/W.

*** @dan, my laser head continues to bump in to the right front magnet while performing a cut of 19.485" x 10.985" centered in the gfui. In order to prevent this collision, my cut area would need to be reduced further than this. Is there any solution to this issue that does not require me to sacrifice more of my workable area? Thank You *** I can only seem to fit a rectangle(inkscape) with dimensions W=19.485" x H=10.985" centered onto the gfui screen without it going out of the usable “cut” area. To check my alignment I used those measurements to make a rectangular cut, and I then scored the four corners by zooming all the way in and placing markers in each corner(#1=top left, #2=bottom left, #3=top right, #4=bottom right). The pictures show how far off everything ends up from where the original locations were seen in the gfui. After printing I am not able to see the resulting left side cut line on the screen at all. I also can’t see half of the #1 & #2 on the left side of the screen either. There is a considerable alignment gap at the bottom cut line as well as #2 & #4 being far off from their original gfui placement. The resulting markers did end up aligned perfectly in the corners on the material, however precise placement was only achieved due to placing the markers directly in to the corners of the workable cut area in the gfui. The camera alignment issue makes it very difficult to place an object in a precise position using the camera bed image as a reference for placement. The result usually ends up far off from the desired on screen placement, even though appearing correct on he gfui prior to printing. 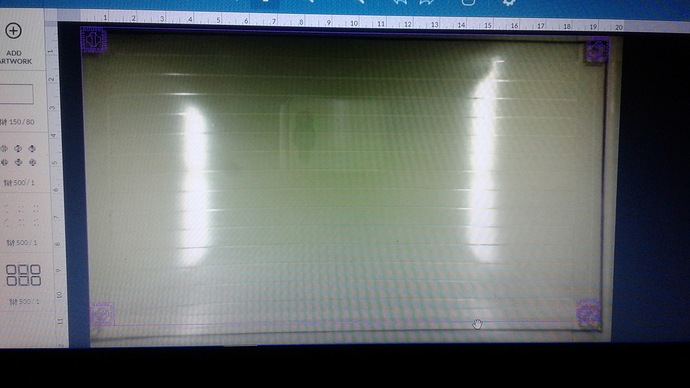 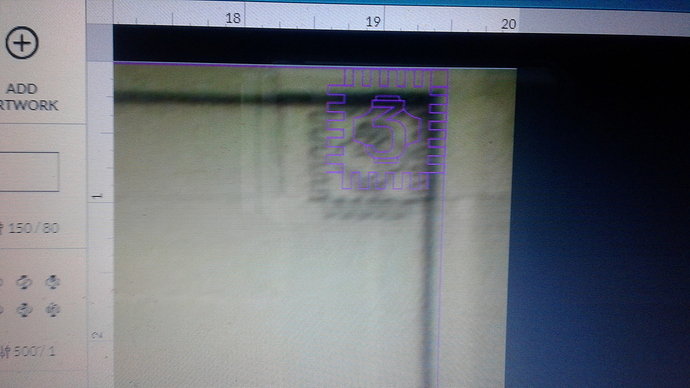 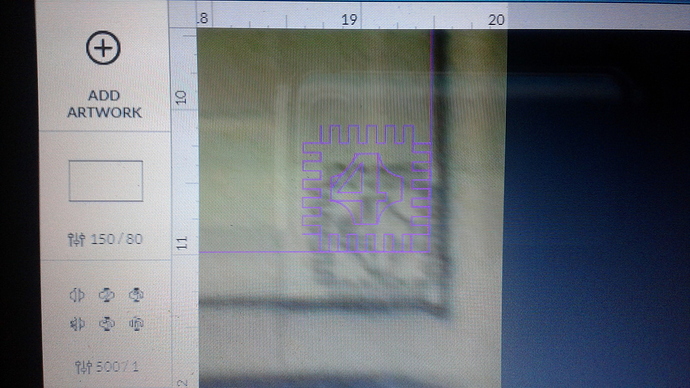 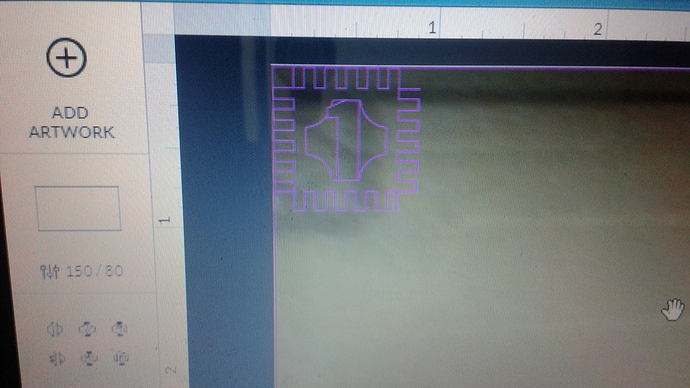 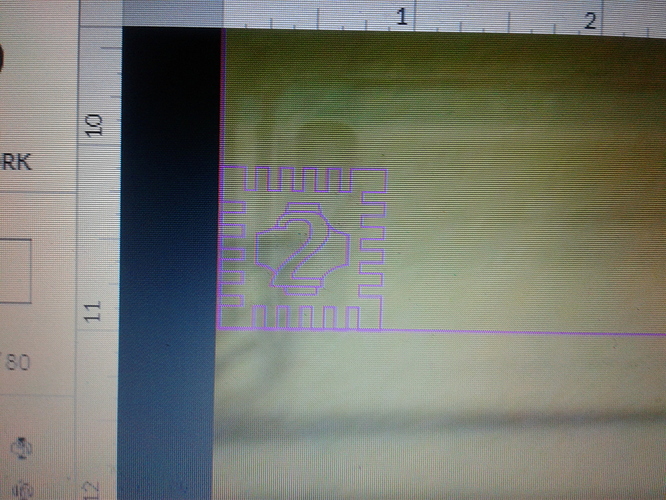 The size limits you have described is the same as everyone else. It is a S/W limit. It also gets smaller if the project includes an engrave and with speed.

As far as the image being so far off… Could be a H/W issue but honestly looks exactly what I would see on my unit if the material thickness was specified incorrectly. The design will show a fixed size in the preview and match the rulers, but the underlying image of the bed changes a great deal with even small changes of the material height entry.

The head bumping is a problem on some machines. 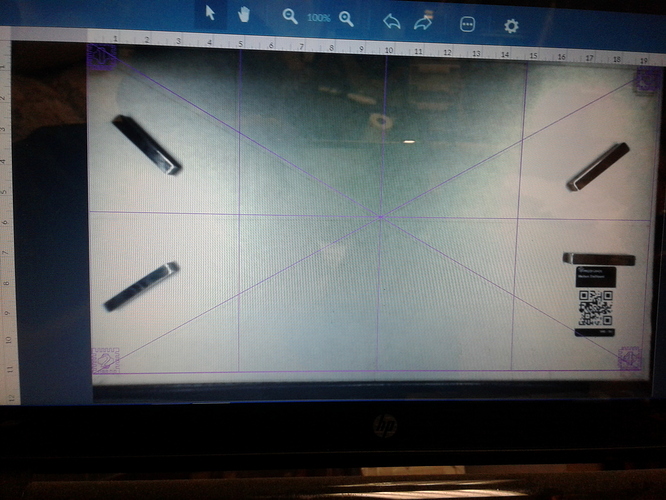 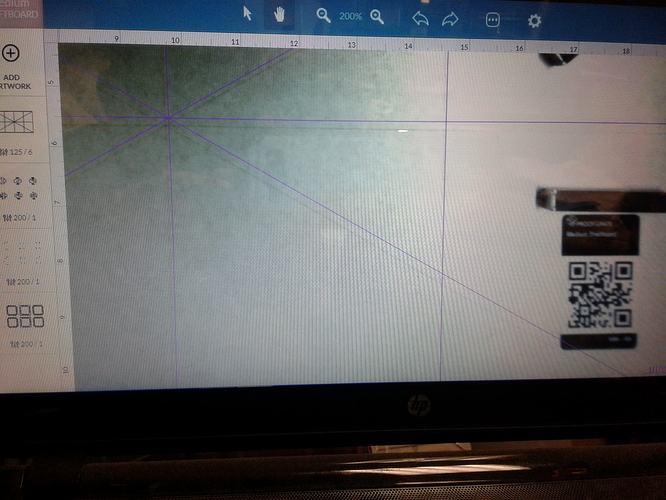 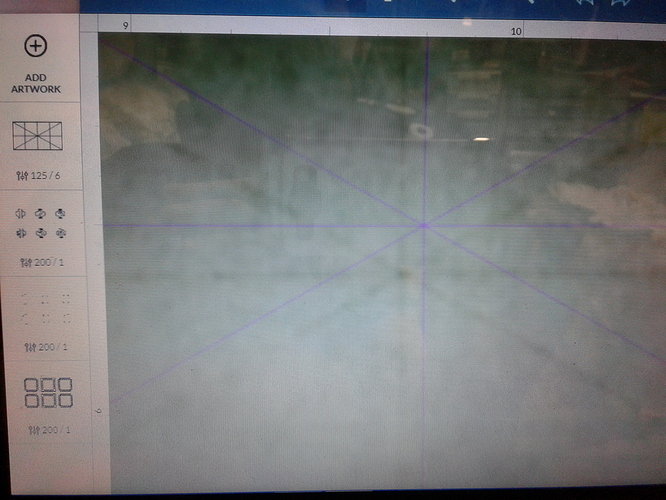 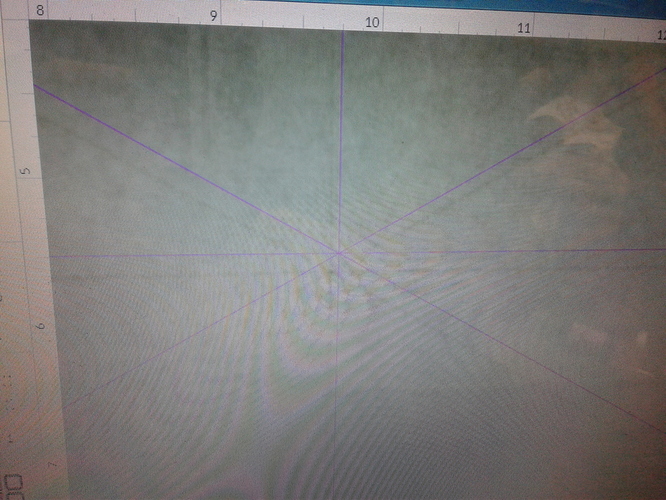 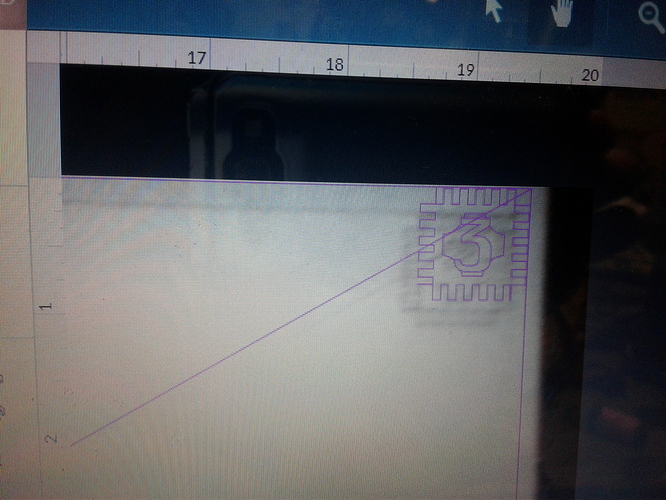 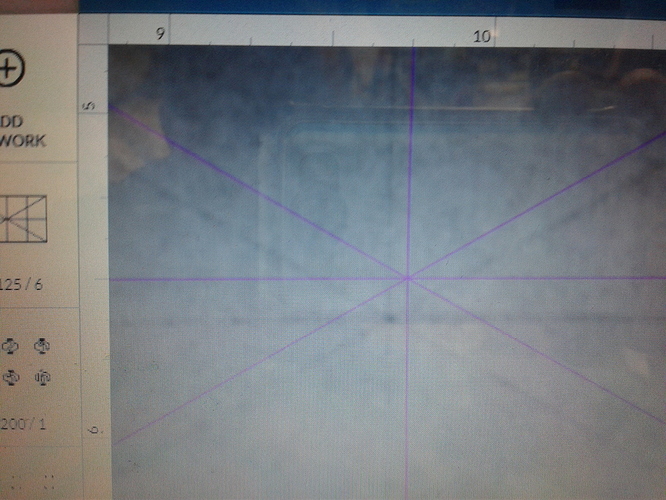 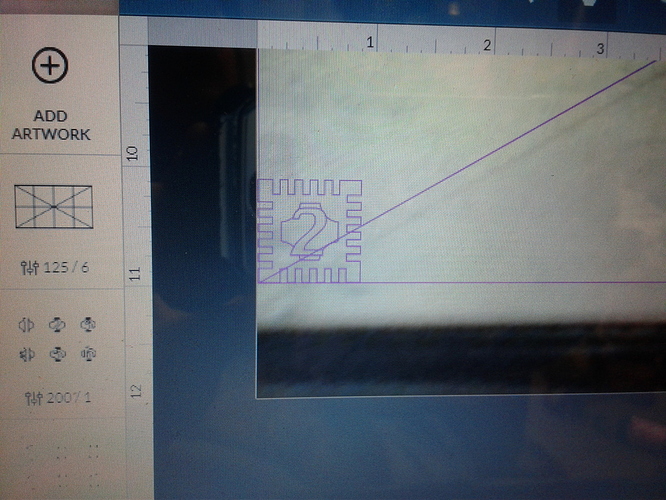 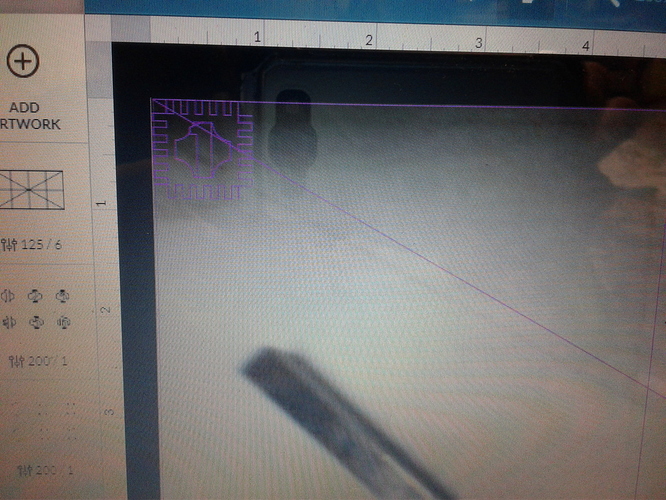 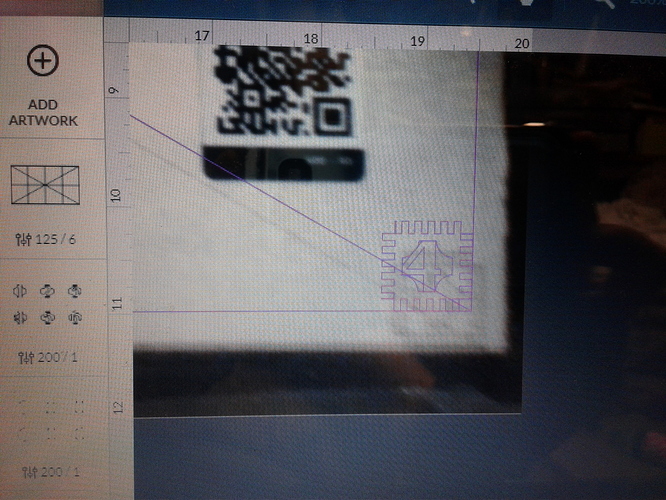 Even directly in the center it appears far off. The #2 ended up printing partially off the edge of the wood, along with half of the bottom line.

Not up to me to say how far off is OK so will have to get an answer from Support. 1/4" off has until recently been an amount Support considers normal. Their claim is that S/W upgrades should improve it in the future.

BTW: Does your operating system have a Snipping Tool or something equivalent to take a screen shot. It looks like you took pictures of the screen. Very hard to see the details.

@benhughes82 , it’s possible that they have lost this thread - Support does not re-read old threads until they go through periodically and close them.

Start a new topic here in Problems and Support, or send them a direct email (one or the other, not both) so that they can see it again. They review New Topics regularly.

(You can just insert a link in the new thread to this one so you don’t have to retype everything.)

And unless you absolutely have to have a file that is W=19.485" x H=10.985", I would make the working area a little smaller so you don’t hit the front of the machine with the head.

Your working area is the area over the gridded portion of the tray. That’s so you don’t hit the plastic tray holder with the beam, which does cut through it. (AMHIK.) There is a roughly 1/2 inch strip on the right of the material that you won’t be able to cut, and about a 1.75" strip on the left that you will also not be able to cut.

If you are concerned about maximizing use of the material, the place to locate material on the bed is shown below: 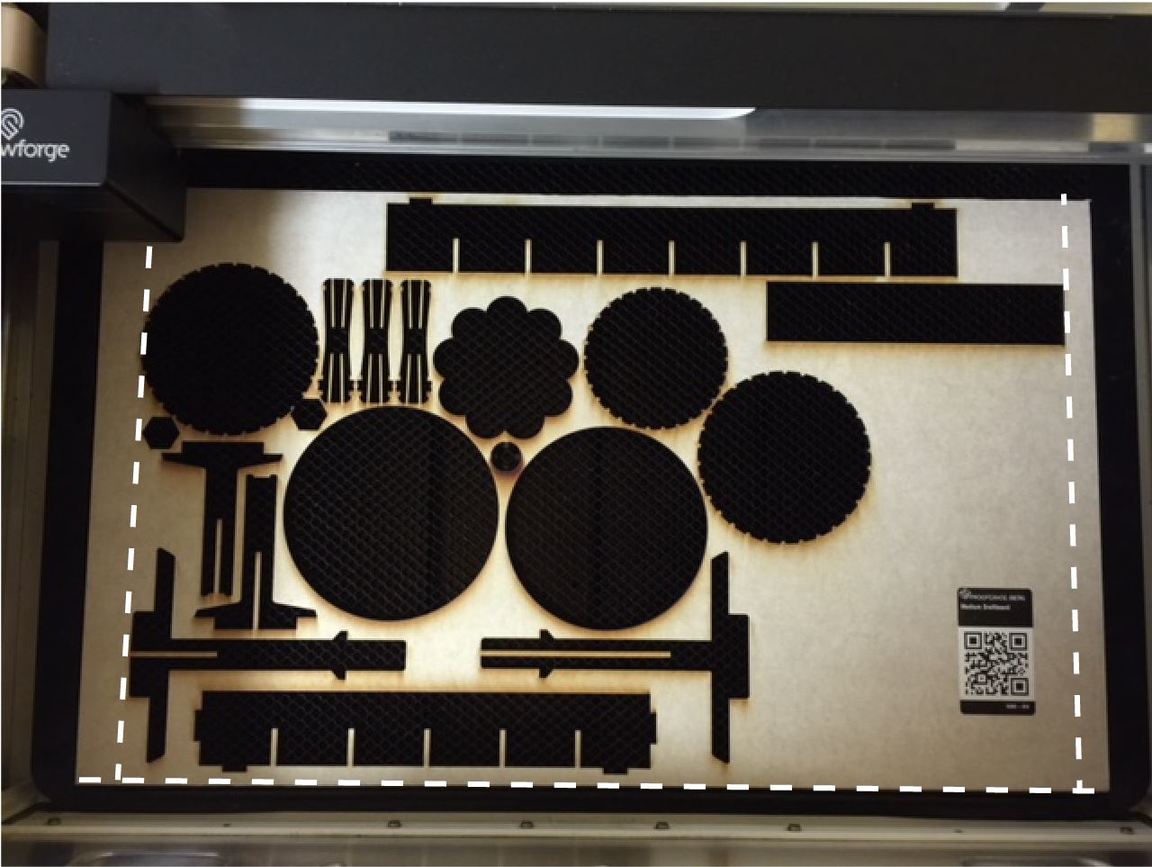 Make sure that the material completely falls over the grating. If you want to go all the way down to use the bottom 1/4" of the material, (which I do not recommend because cutting too close to an edge produces flashback on the back of the cut), but if you want to do it, shift the material up further into the zone defined by the dashed lines. Then you will be able to reach the bottom edge with the laser. (And you won’t hit the door.)

Take a look at the camera view for this though:

You’ll notice that what we see on the screen is not the whole bed. They do that on purpose, they show us a truncated view that roughly corresponds to the cuttable area of the bed, not the whole thing. (And there’s some distortion from the fisheye effect of the lid camera.) 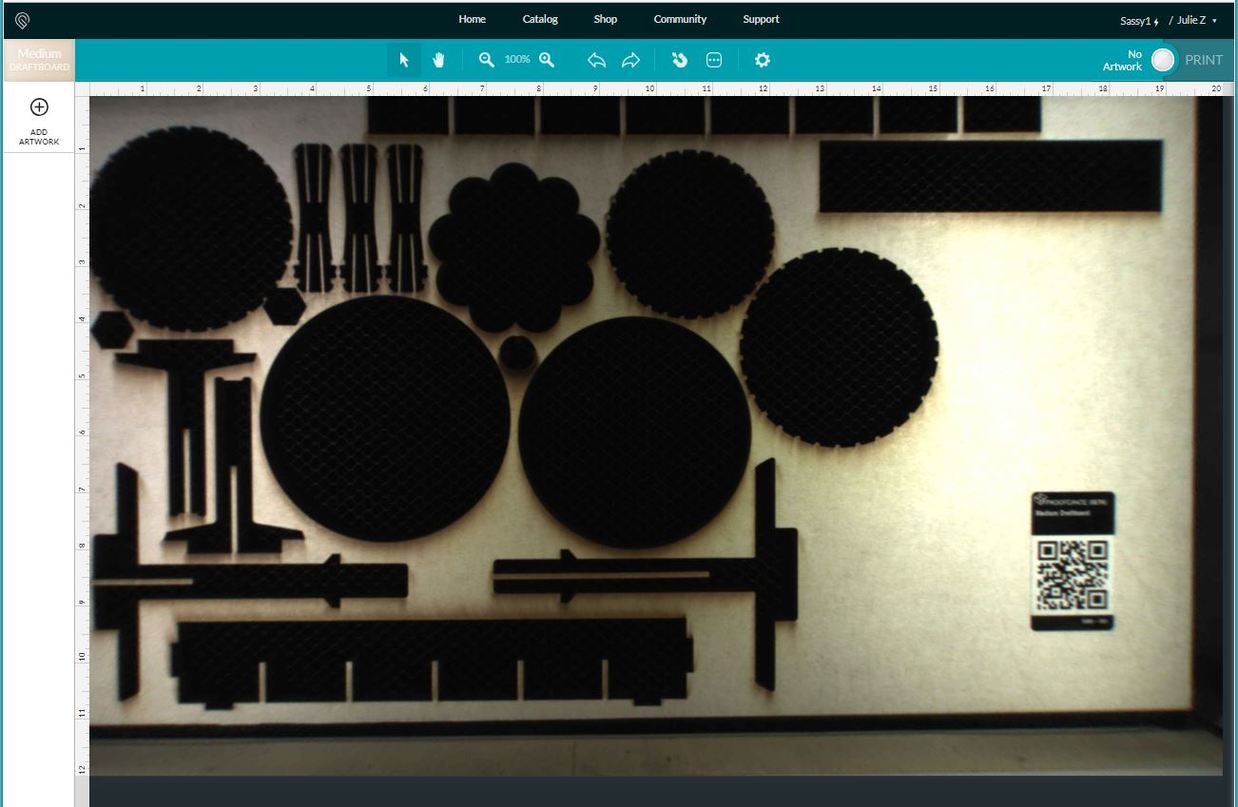 So if you’re on top of things, you might be asking…how did she get those top cuts to extend beyond the cutting area showing? Simple. Once I finished most of the other cuts, I turned the material over and brought the uncut area into the cutting zone and cut it from the backside. So you can use up most of a sheet, and I will use the side strips for small cuts later. (I get really good use out of a sheet of Proofgrade.)

It’s not optimal, but it does save on material while we’re waiting on the final spread. If you do need to cut something full cutting area size though, you’re pretty much stuck. I would recommend making it just a hair smaller so you quit whacking the head into the door though,that can’t be good for it.