So here’s my problem…
I’ve got this 3/4" acrylic. I can get through it pretty cleanly now. Obviously I’ve had to remove the tray to cut this stuff. And that’s fine. But I can only get through it cleanly if there’s nothing underneath it. So I’ve cut through with the material basically floating in mid air. Even had to remove the masking or else it catches fire and either burns or smoke stains the acrylic. And that’s okay, too. There’s no burning or smoke stain with the masking removed. BUT! Now I need to cut then flip the object to do the other side. So I need to use the surrounding material as a jig. I cut the shape, remove it from the rest of the material with tape, then flip it and put it back into its own hole to do the other side. But now I have to have something underneath the hole (because material can’t actually hover in mid air). So I used wood. Well, the wood burned and smoke stained the hell out of the acrylic.

So! Either I need another way to do this, or I need to support the acrylic with something that will not burn and will not flash back onto the acrylic. 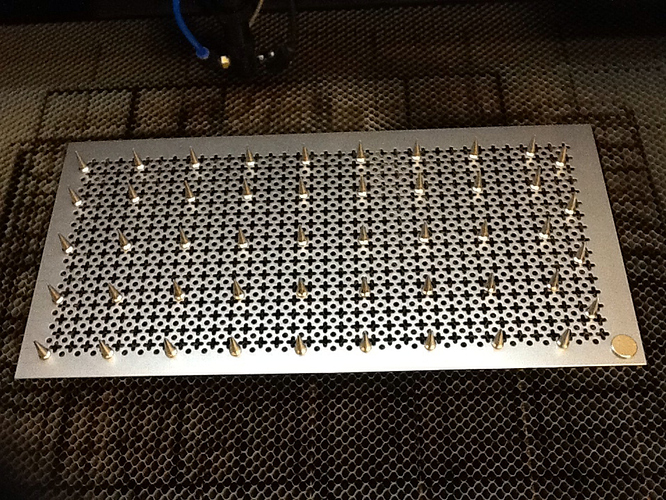 If you flip it over, wouldn’t the convex/concave nature of the laser cut prevent the material from slipping through?I don’t know if it’d be level, but I wouldn’t think it would drop through the outside piece.

Could you add ‘camlock’ type cuts to the outside cut., then when you replace the cut piece, turn the cams around till they grip the sides ?

It’s a good idea. And I think it would work if I carefully positioned the pins for each design (they’re not all the same). I’m thinking a benefit to a pin bed like this is it could be easily shimmed to variable heights. I’ve got to give this some design thought. Thanks!

If you flip it over, wouldn’t the convex/concave nature of the laser cut prevent the material from slipping through?

I was wondering the same at first. Turns out, no. At least not in my test last night. I had half the shape supported by wood, and the other half open air. It actually started to sag through the open air side a little. Seemed like it was from the heat. The 3/4" acrylic got very hot when cut. And stayed hot for a good couple of minutes. In one spot, a section that I’d cut melted back together again a little. I was able to pry it off with a blade pretty easily though.

Could you add ‘camlock’ type cuts to the outside cut

I think I get it. But I can’t imagine the amount of work that’d be required to do that for several pieces.

As for heat management, seems like if you did multiple lighter passes with cooldown times between you could mitigate that? Of course it would make it take longer, but how much of a problem that represents would be a balancing act that takes into account how much you plan to cut, what the end product finish needs to be, etc. However it works out, I’m curious

This might give you a starting point. I tried to get it to be a single line that modifies the outer edge of your work piece. You’ld probably need two, but no more. One might even be enough, depending on your outline shape.

I guess they might end up sticking together or something. That’d be annoying.

If the pieces being cut out are large-ish, then you could do a flat-pack bed of stumps like this: 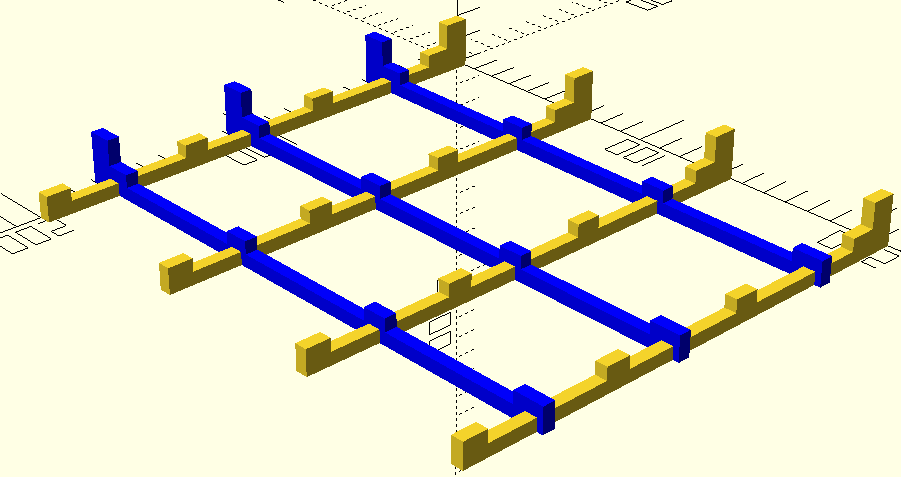 HoldingRack.png901×477 9.84 KB
The tallest outside stumps would provide a way to index when you flip it over and the acrylic would float on the lower stumps. They interconnect and could be cut from the cheapest material available.
6 Likes
evansd2 February 22, 2018, 4:18pm #12

I like that, a pin bed sort of, but that we can easily make on the GF. Awesome. Could do a corner box in one or two places if you need more rigidity. Nice work.

Neat idea… but it wouldn’t work for me in this case. (It makes more sense if you know what and how I’m cutting. But I’m not ready to share that yet.) Suffice to say, it needs to be supported from underneath. I think either with strategically-placed pins or with something that will not burn and not reflect and not reflect heat. However, what you’ve shown me is awesome and I will likely need to use a design like that in the future. Thanks so much for it!

Maybe you could use another piece of acrylic.

Ya know… that’s really not a bad idea. I’d hate to waste the acrylic like that, but it might just be the way.
And you’re right… I’d run the risk of fusing the support acrylic to the good acrylic. But maybe it’d separate easily anyway. I’ll definitely give that some consideration. Thanks!

f the pieces being cut out are large-ish

I wouldn’t say they’re largish… The objects will vary, but the one I cut last night was ~1.50" x ~.75". I think, if I went like this, I’d need the smaller “pin” idea like @kittski and @jakerember suggested. Thanks!

@Tom_A While I’ll steal my own idea, two things occurred to me. First, you only need to cut one set of the cams. After that you just cut the outline hole plus ‘pressure piece’ along the side of the outline of your work, and drop the cam into it.
Then an even simpler idea occurred, but might not be doable depending on your design. If you were to cut a rectangular slot alongside your outline, then push a small wedge vertically down into it ?

Then an even simpler idea occurred

Man… I swear I’m smarter than this! But I’m not getting it. If you feel like explaining further, I’m all ears. If you don’t feel like it, no worries! I appreciate the thought anyway!

I think what he is saying is that if you have a small wedge, you can get horizontal pressure holding your piece in place (instead of vertical pressure that you might get from something like a pin bed).

I think what he is saying is

Ah. I can see that. Yeah, in this case it won’t work for a couple of reasons… Again, this stuff is 3/4" thick. I don’t think I could transfer enough pressure to the hole to hold something in it. It’s quite solid. Also, I’ve got other cuts within each cut piece. If I applied horizontal pressure, things would compress that shouldn’t, deforming the piece.

While I don’t think this system would work in the glowforge, I think it’s interesting as a design concept for a modular support system.

Thanks July for being spot on, and thanks for considering it, Tom.

To my mind, there seems to be a bit of a contradiction between it ‘being quite solid’ and it ‘things would compress that shouldn’t’.
Obviously you know what you’re trying to cut, but I wonder just how much pressure is actually needed to hold it in place under the laser.
Could you indicate what the overall size of the individual piece might be ?
Given that it will be 3/4" thick, that would seem to be more than enough surface area for, say, a small angle wedge with a high friction surface like fine grit abrasive paper to grip, especially with wedges on opposite sides.