Laser seems to be pulsating while scoring Acrylic

I have a new machine and the scoring on acrylic seems to be pulsating or changing in intensity and width. I have cleaned the cameras repeatedly, i have tried numerous on/off, plugging and unplugging, cleaned all the lenses numerous times and the scoring keeps coming out spotty at best. A straight line seems to blob and thin and very weak in intensity in some spots and strong in others. Any advice?

Can you post a picture for us to look at?

Also, if you could, include a screenshot of your settings and let us know details on the material. 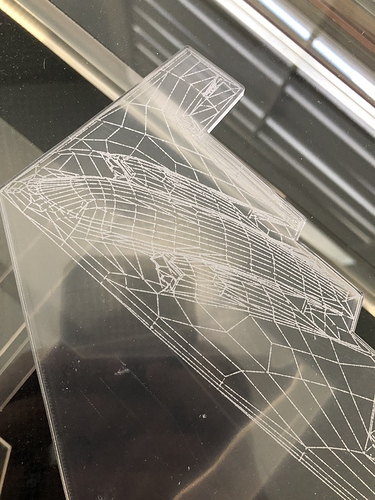 What settings were you using?

Is it doing this on any other file?

Score 460/9. Does it to all files. I have two other lasers with same settings and material and they work on these settings.

That doesn’t make any sense.

That speed and power would barely even leave a mark on acrylic.

But it does. You can see from the photo it does. I’m just posting here to get Glowforge to respond about the faulty power supply and the instructions to send it back for a new unit.

Suggest you post the time/timezone/date of your print so support can check the logs.

That does not look like a score to me, and looks remarkably similar to a pre-made LED lamp you can buy.

Does that acrylic still have the protective plastic on it? If so, remove it before scoring. Second, that is a very fast/light score setting, try using the Glowforge acrylic default Score settings.

Hence the issue of my scoring… Not sure what your intent is with your comparison but I am getting a hostile vibe from it so I will conclude our discussion.

On the backside only. I will try the default glowforge setting, although my two other GF’s operate on these settings just fine which indicates an issue.

It might also indicate a need to clean the lens and windows, so that would be the next thing to check if you want to run at fast/low power speeds. I think the machines are individually tuned, and that one might not be tuned to quite the same settings that the other ones are. There was a recent memo from Rita about a tuning issue on a few of the machines that will be fixed with a roll out in a few days.

Good point on the tuning issue. Lenses and windows are clean. Brand new machine. Trying out the default settings now.

Also curious about the setting you used to cut, and why you didn’t use the default settings for the score?

That’s a very clean cut for the GF, but more importantly, if there were power issues, it wouldn’t have been so uniform… 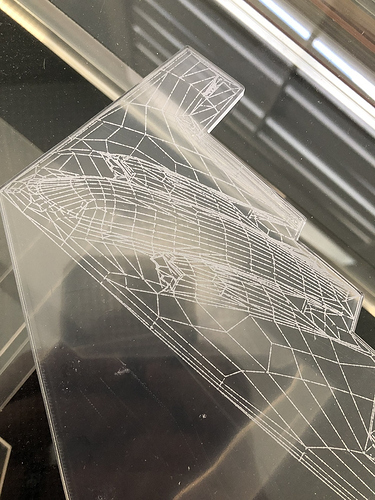 The default glowforge scoring didn’t have an issue. Good suggestion. It might be the tuning issue then meaning I’ll need to increase the power of it until the glowforge tuning patch.

If it was a “tuning issue”, it wouldn’t have cut cleanly.

That is so weird. It almost looks more like an engraving of a rastered image than a scoring.