Good Morning, My Laser head keeps seizing up during cutting. It stops and pulses a few times and then goes off track. At first I thought my machine was dirty…so I cleaned her. I tried it again and it did the same thing…bad wood? I tried different material…same problem. Please Help 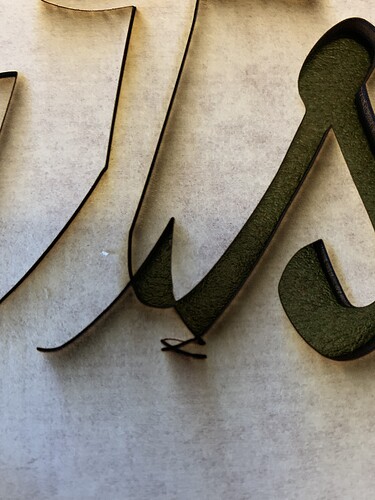 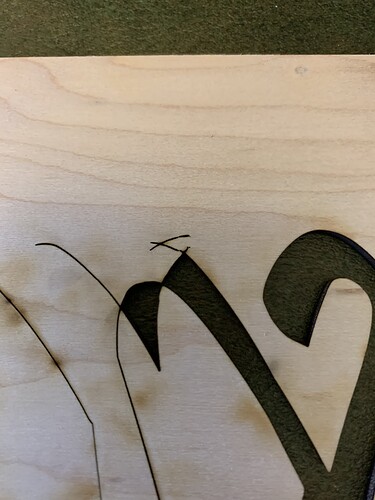 It’s probably hitting something. Make sure your material isn’t in the way of the carriage or rollers or anything. Also check the tracks to make sure there’s no debris on them.

Bad wood can’t be the problem, there’s no physical connection, it’s a beam of light. But bad placement of wood could definitely do it.

If not that, maybe a belt is loose.

That looks like two different failures that happened in the same spot in the file… if that’s correct, then the file is your problem.

it happens with different files…

The pictures you posted, having what appears to be the same breakaway issue at the same spot in the file would indicate that the file was the issue, like something in the file is causing the Glowforge to lose control and stall. But if you’re sure that the issue happens with other files as well, then the issue cause would seem more likely one of a physical obstruction, the printer transport mechanisms are running into something that restricts movement and triggering the failure. How is your material being held in place? Are you using anything to hold your materials flat against the crumb tray? Pins or magnets?

I am using honeycomb pins 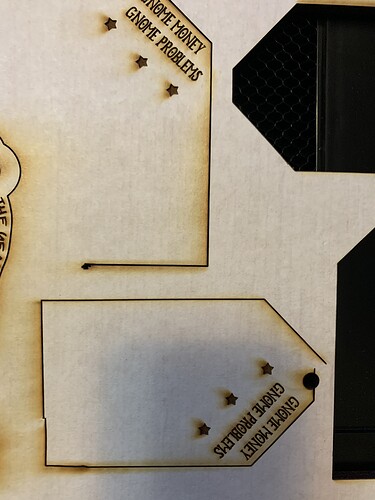 Make sure that the top of the pins aren’t resting higher than the 0.50" maximum height, if they are, they’re likely hitting the air assist deflector and that’s your issue.

The point of failure looks to include some erratic behavior of the print head, like it shudders and changes direction before stalling. If that is correct, the issue could be rooted in a control cable that has worn through the insulation, check your cables going to the print head and around anything that moves.

well shiz… I haven’t even had my machine for a month. Are you talking the white cable at the top of the gantry…sorry for my ignorance and thank you for your help

they All look ok and no wobble on the head

I don’t know what to look for next, not without being able to see the issue happen…

Yes, assuming that the issue is a physical one, the full range of travel is used and would identify the issue location, which would make it easier to locate a physical reason for the issue. Maybe the print head gets wonky when the X and Y axis are in one particular spot or relationship, but when placing files and material on the print bed you aren’t aware of this particular possibility because the material and file orientation aren’t obvious to you.

ok…thank you again for your response and help. I appreciate you

You might want to carefully remove the printhead from the cable and carriage and placed somewhere soft where it will not be disturbed and remove the carriage and check out all the wheels and belt. If the belt has damage in one place that would cause your symptoms and the jumping off the belt would have the head not know where it was. Also feel along where everything travels that there is nothing in the way. One person had a tiny magnet jump in there and get stuck making all sorts of issues.