My buddy got a shapeoko 3 and made a simple but nice maple/walnut box. I decided to interpret it and see how I could replicate the design. 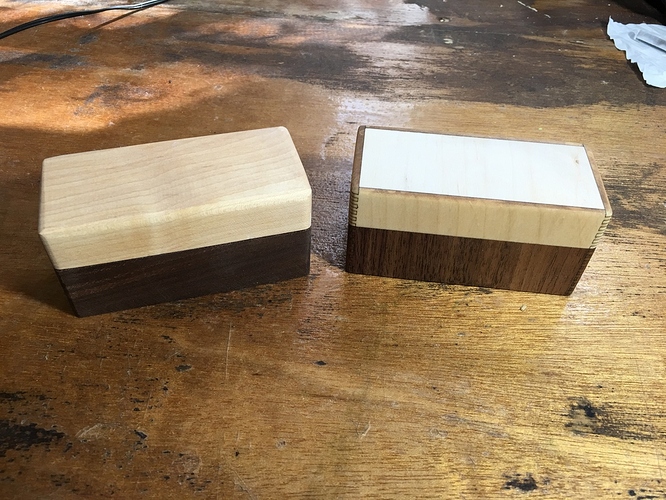 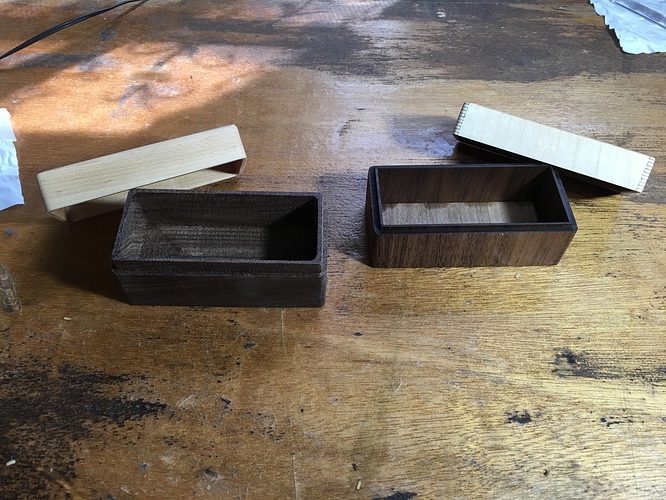 Lining a box with a thin inner layer of the same wood works well for making an inner lip, but it’s slow having to glue it up. Engraving a ledge might have been faster?

The maple and walnut I have are different thicknesses, this led to a number of design challenges.

I decided I wanted to try inserting the top and bottom as a solid piece with no fingers just because I wanted to try it. I don’t think it works aesthetically, but I know it’s really easy now.

Both boxes are finished with danish oil.

Hand sanding was easily the most time consuming part of this process. Next time I’d want to use a disc or belt sander to do the bulk of it. Easing the corners evenly was also a challenge. If I only had a router table…

Overall it’s a nice little box, but next time I’d stick to traditional finger joints all around and work with materials that are the same thickness, it’d make a more consistent look and a far simpler build.

As always all wood sourced from green valley (http://www.gvwp.net/).

both are great looking boxes.

how are you doing the rounded edges for the corners with the finger joints?

So, who won? Which was faster? Initially and overall time taken?

Those turned out great!

Both are great expressions of a design, I leave esthetics to the individual.

Six of One, Half dozen of the other…

I like them both also. A fun test to what you can do.

ugh. maybe a belt sander to get close first?

Hand sanding was easily the most time consuming part of this process. Next time I’d want to use a disc or belt sander to do the bulk of it. Easing the corners evenly was also a challenge. If I only had a router table…

One of the challenges there is that my belt sander is so aggressive, I think the finest grit I have is 120. It’s a benchtop model, and I think the belts are 4x36"? I can’t seem to find belts with finer grit, something in the 400 range would be much more precise. I should get serious about googling, surely this exists.

I can’t really say, since I didn’t ask him how long he spent on it. I will say that I probably took more time on finishing than he did, he clearly didn’t spend a ton of time on his corners to get them as even as I did. I also sanded mine to 600 and I’d say he stopped somewhere more like 220.

In terms of assembly, his is dead simple, two routed halves, boom, box. I will say though that I don’t know where his slop is, but he has some. His top and bottom fit nicely one way but not the other, there’s inconsistency somewhere in his machine. The glowforge was, of course, dead-on accurate. I think that’s one thing that we take for granted, we have so little mechanical stress on our machines compared to a traditional CNC.

So instead of time, I’ll comment on final result, and will say that results are mixed. His box looks cleaner and more monolithic, but mine is more accurate. His is heavier and thus probably stronger, but mine would probably withstand being stepped on, which seems to be “strong enough”. Overall, I am a stickler for symmetry, so in a lot of ways I prefer mine – the inconsistency of his box would eventually bug me. I bet it’s bugging him too, I suspect he’s trying to figure out what caused the inconsistency as we speak. 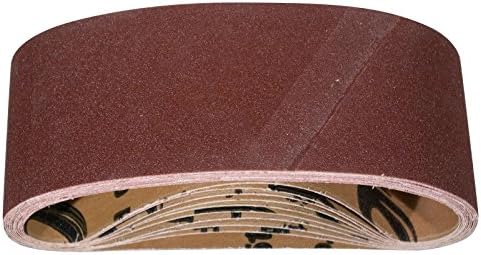 Looking at the CNC box his spindle is not perfectly squared, hence the tool marks in the bottom of the box. Have your buddy re-square the spindle and see if that fixes the problem if not his steps might be off causing the box to fit one way but not the other.

I think it’s both, actually. If you look closely at the lip of his bottom where the lid sits, one side is markedly thinner. He assured me his file was accurate, so it seems like he’s losing steps or something in one axis.

Try Klingspor’s Woodworking Shop. I bought some nice paper from there for my drum sander, and they carry a lot of abrasives for different applications. (Sorry, don’t have the link right now)

I’ll take a look. Thanks for the tip.

Whereas Amazon has a ten pack for $1.70 apiece: 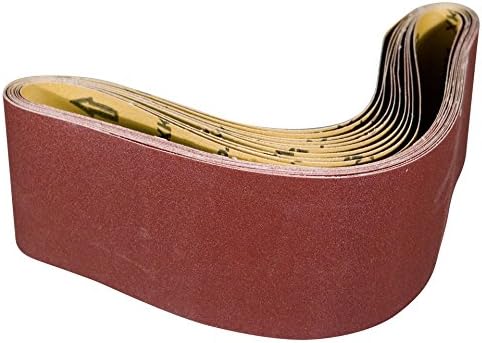 Home depot sells the same 10-pack and can do ship to store if you aren’t into Amazon.

I’m not sure that I can justify the price difference, and will likely go with amazon if I pursue it.

Yeah, I would not pay a higher price either. Especially not for aluminum oxide…it heats up pretty fast and doesn’t seem to last long. (I understand all of these were that cost.)

I would just go with the cheapest ones…good find. I bought 100’ rolls of upgraded sandpaper (can’t remember what the type is called) for my drum sander. I can use it over and over and over again on a 12" wide cutting board, and it doesn’t heat up. One will last a long time, but it is not aluminum oxide.

sometimes the cost/quality does matter.
For a while, I used to do security installs(along with data and telephone stuff for commercial installs). This one place had all steel door frames that needed door sensors installed in(the button/plunger type instead of the magnetic kind that go on the outside of a frame). For a couple extra dollars, home depots metal hole drill bits lasted roughly 3x longer than the ones from lowes. I think it was a difference of 10 to 12 dollars, lowes to home depot respectively.

I doubt, in this case, the sanding belt will last 4x longer for the cost. I’d go cheap on it too.