Hi-- Been collecting leaves the last few weeks and have them pressed in books and topped with heavy things all around my living room. This quote has really spoken to me this season, and put it onto this giant sycamore leaf that I had dried/pressed. To get a sense of scale-- the frame it’s in is 8x10 inches.

Had to do quite a bit of hand manipulation in Illustrator to open up the closed letters. Very easy still to accidentally cut off middle of letter (e.g. the A and the o and l) when pulling the cut part out which I used small needle nose pliers to help me do… Also, since sycamore veins are pretty thick, had to use an exacto to cut the spots where the letters crossed the bigger veins in particular. Found a glass front clear frame that I had long had sitting around as a possible way to mount it-- think I’ll switch out black paper behind for the white. I found, though, that after it was just sitting out for a day-- before mounting it-- the moisture from the inside air starting it to curl/ripple a bit. So, I think important that any cut leaves get mounted/framed/etc right away. I used speed 440, power 45 on regular Glowforge. 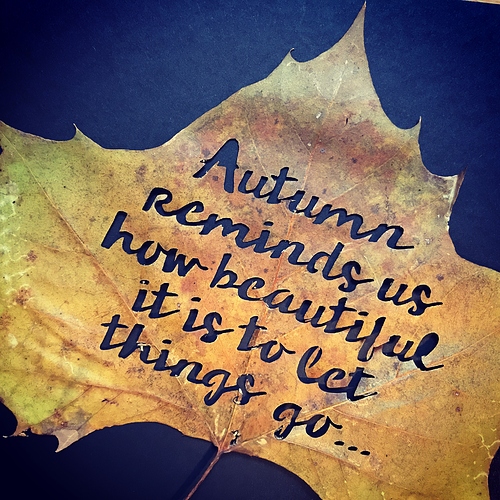 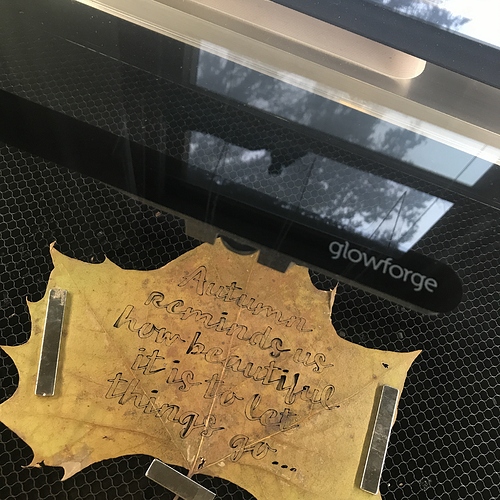 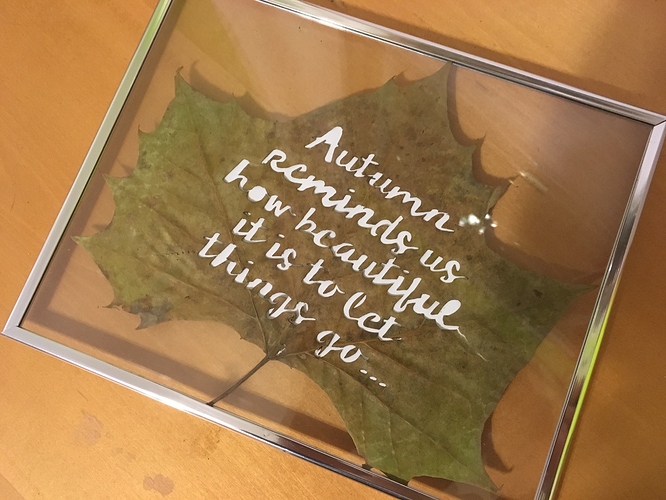 moisture in air was causing ripples.
Maybe a uniform dampness would be better?
Curious if a light water mist would help?
Would be less crackly maybe.

Just a reminder that non-proofgrade settings are only allowed in Beyond the Manual. You can post them over there and then link to them, if you want to keep this in Made on a Glowforge, or you can just move the whole post over there.

Oh right-- thanks for the reminder-- will move it over!

It was a matter of once it was done it becoming ripply. And, could be that the leaf had only been pressed for less than a week – maybe if it was fully fully dry it wouldn’t have taken in moisture again. The first tests I did were on fresh leaves-- came out about the same.