Left side of my gantry keeps getting stuck

I have had the left side of the gantry get stuck before which in turn makes the right side jump forward and then leaves the gantry at an angle. This time though the left side stopped moving as if blocked by something. I hesitated pulling it forward because it almost felt like it was not going to move forward, but then it did. I realigned the right side and it now moves freely and smoothly forward and backward.

So the big question is Why? Why does it do this from time to time? I did not find anything interfering with it. The belts look fine. The V surface that the wheels ride over on both sides look fine. The wheels look fine. What are the various causes of this? I’d like to know so I can be on the watch from now on. Proactive is better than reactive, you know?
JSM

There’s a lot of wiring and tubing on the left side of the machine, some of which connects to the laser tube itself, some which doesn’t. There’s a lot that could get snagged if out of position beyond wheels and belts. It’s hard to see what’s going on past the lid of the machine.

Here’s a photo of some of what’s under there, stolen from another forum post. On a GF Pro, there are some additional components even that aren’t in this photo. 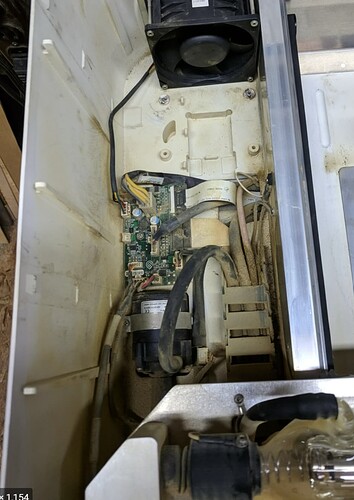 That’s pretty helpful. I tried taking a picture of that with my phone, but I could never be as high as your camera was. Much better shot. Thanks.
JSM

It may not be getting stuck, the belt may be slipping - which can happen if the tension is not correct. Even a like-new belt could slip if it’s too loose.

There’s a whole section in the support troubleshooting pages covering checking, and adjusting, the belt tension.