I’m having really confusing problems with an engrave I’m trying on cork. I’m running a gray-scale bitmap vary-power engraving on these, and I’m getting different results run to run. Sometimes it works as expected, but about half the time the lighter sections seem washed out. Has anyone had problems like this? I saw a post dealing with vary power engraving on maple, and that one ended in the unit being returned. I really don’t want to return my unit since its out of warranty now, and it works just fine with everything else I’ve tried.

This is what I’m engraving, and it takes 10+ minutes to get to the point where I can tell if the 40 minute engrave will actually be a success. I’m getting really tired of half-engraving coasters. 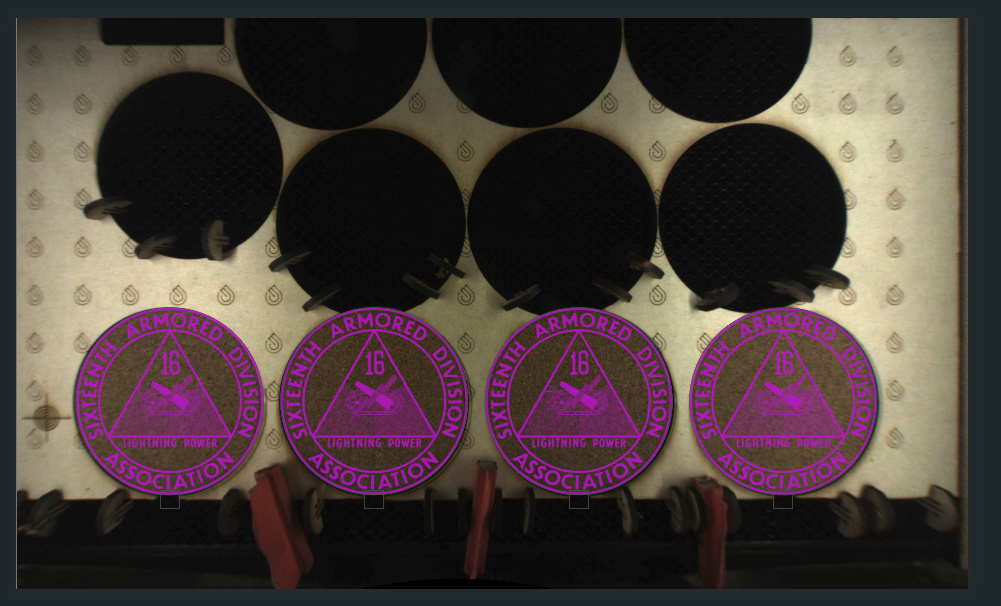 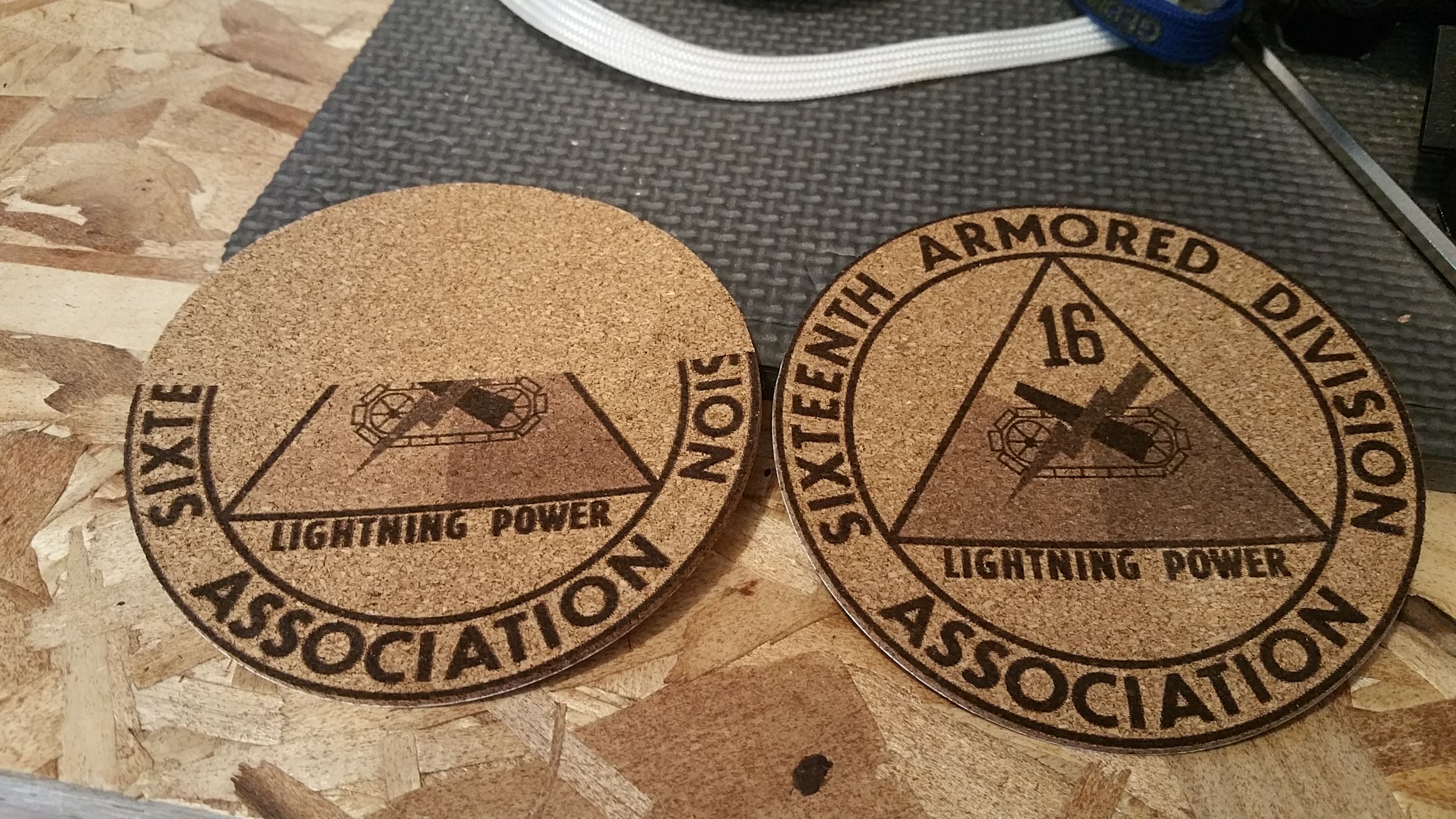 I’m had the first run on a day fail and every set after succeed. I’ve had the first one be perfect and the next fail. I’ve had it ping-pong between succeeding and failing. Cleaning the lenses (the left gantry, right head, and focal, plus the head mirror) doesn’t seem to do anything.

I would guess inconsistencies in the cork itself. (Run into the same problem with bamboo…it appears uniform, but isn’t.)

I wish it was that simple, but it isn’t limited to piece by piece. The problem never comes as a single coasters failing, it’s always the whole set of 4 is either perfectly fine or all bad.

Sorry if that wasn’t explained clearly in the post. The two example pieces are from different runs of 4, of which the 3 not pictured from each run match the one pulled as an example.

It also does this (to all 4 in the run) on occasion when I let it continue. The inside sections of the triangle is divided into three equal sections that each have a solid gray shading to them, so I have no idea how it is fading in like that. I can share the svg privately if someone wants to look at it, but I was given the file from the guy who wants these coasters made so I can’t upload publicly. 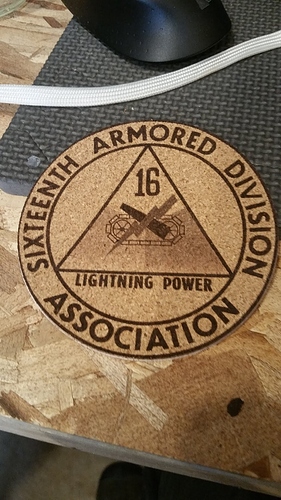 Are you setting the focus manually in the engrave settings or allowing the “set focus” to assign it automatically? It could be that each one when auto focus runs through picks up just a slightly different focus which would be just enough to throw off the engraving depth?

Are they all the same on each sheet of cork? The differences might be in the composition of the sheets. More glue, less glue, older sheet, drier sheet…that sort of thing. The engraves look fairly similar to me…maybe if you get one that comes out too light, you can just do a second lower power pass to darken it up a little at higher speed.

Oh, i see it now - it’s just the interior triangle section that looks significantly different. That is odd.

The settings for the lighter colors might be too low…what might be happening is you are getting a more charred effect on drier cork, resulting in the darker color that looks more black than brown in tone on the darker ones, and if there is moisture in the other cork, it wouldn’t burn the same.

A second pass on just the triangle interior would help with that, but you would have to break that section out into a separate engrave if you haven’t already done it.

Yeah. I would look at focus. Variation in focus would account for the differences you’re seeing, particularly with lower power where focus is going to be more critical to delivering the power to the cork.

Are you setting the focus manually in the engrave settings or allowing the “set focus” to assign it automatically?

I’ve tried it both ways, with the same randomness resulting. The cork is absolutely flat, I’ve checked. I’m wondering if the outside heat is causing the laser power to fluctuate and sometimes be fine and other times be too little.

Are they all the same on each sheet of cork?

All these coasters are from the same package of 80 I bought off amazon. They come pre-backed with adhesive and are 2mm thick.

The settings for the lighter colors might be too low

I would go to a darker color for those parts, but then it would be too dark sometimes and fine others

I think the problem stems mostly from cork just being really touchy so the difference between 2 and 3 power is rather big.

Variation in focus would account for the differences you’re seeing

I would expect variations in the focus to cause problems not restricted to horizontal though. The way the one fades in (and others like it) makes me think its related to the laser power output.

All 3 or those methods have the height set correctly in the engrave settings (0.08"), so there shouldn’t be any actual defocusing happening.

You’ve done all the right kinds of troubleshooting, so you’re probably right and it’s not focus.

Only other thing I can think of, the focus operation is “open loop”, I think. The stepper in the print head moves the lens based on a mechanical “model”, it’s not actually optically confirming it’s focused. So if something is loose in the print head, you may have poor repeatability even though you’re setting the same focus parametrically each time. You said you’ve cleaned the lenses so I suspect you understand it well enough to see if anything “wiggles”.

If you strike out on that, you should start to look for other factors, like ambient temperature. Who knows, even time of day (in that the quality of the electrical power you get varies as a function of the load on the distribution network, and that changes over the course of a day). For example, if it seems to work best at night, that could be because it’s cooler or it could be because the power is “cleaner” because there’s less of a load on the power network.

I would get some cheap hardwood at the local Home Depot to experiment with. It would also be informative to see if the same problem occurs with other materials. Is this a property of the Cork as some have suggested, or the machine itself? If it’s the machine the same issue should occur on everything. Maybe even paper or cardboard would be suitable for testing.

What’s the typical interval between success and failure? Is it every other job no matter how much time there is between each attempt?

What’s the typical interval between success and failure? Is it every other job no matter how much time there is between each attempt?

I haven’t kept a detailed log, but it seems to be random to me. Sometimes it works for spans as a time, other times its every other one fails.

I’ll check the lens for wiggle, and try to reproduce the problem using pg in a couple days once I get home again to rule out material problems. The room has been hot recently, so that could be the problem. I have a portable AC on order which will help.

I’m with the “variations in material” camp.

I’ve seen stuff like that with hardwoods when I engraved a previously masked piece of wood. The very light residue from the masking made the lighter engrave come out very inconsistently.

No telling what processes they use to prep that cork. I’d suspect that the cause lies there.

All 3 or those methods have the height set correctly in the engrave settings (0.08"), so there shouldn’t be any actual defocusing happening.

Just for the sake of asking, not questioning your ability or knowledge of the machine since you’re versed. You’ve run one scenario where the focus is manually set in both material thickness and under the actual engraving menu?

If I understand your question, I believe that case is covered by number 2. For that one I manually set the material height using “unknown material” to 0.08", and have 0.08" set as the focus under the engrave settings

Perhaps I missed it, so I’ll ask… could this be a matter of placement on the bed? Although its related to focus, its all about that single focus point. I’ll have to run my own tests, but my runs are very focused.

could this be a matter of placement on the bed?

It’s happened in the middle as well as the top and the bottom, all the way horizontally across the bed.

Variation between runs is the oddest element to this… one run is fine, another is off, then it works fine again.

Oddly enough, it seems to be working consistently as long as I turn the machine off and on between each run. I haven’t had time yet to look farther into the other potential issues, so I can’t speak about material inconsistencies or focal problems. I still doubt material inconsistencies is the problem since all the cork comes from the same vendor, and I’ve never seen a single one fail in a run of 4. Its always been all 4 or none, and that doesn’t seem likely to happen if the material was causing the issue.

Well, I had something that seems to align with what you are dealing with. I did a run last night and after the run, it recalibrated and threw off the alignment of the image which prevented me from running an additional cut.

It could be a matter of post project calibration, so power, focus, etc get thrown off as it recalibrates. Resetting requires you to wait before doing another run.

It’s an idiosyncrasy of the GF. My history with lasers had other issues, never this one though. Guess we will be resetting often.