The solar eclipse ended up with a bunch of individual threads. I know a lot of folks here have interest in that stuff. Might be kind of neat to see them all in one place, if people are taking any pictures. (Even though it’s definitely not as awesome as the solar eclipse in totality)

I’m at the base of the Organ Mountains in NM, and the weather isn’t great, but I have warm clothes and a lot of coffee. So that’s something!

Nominated for picture of the year 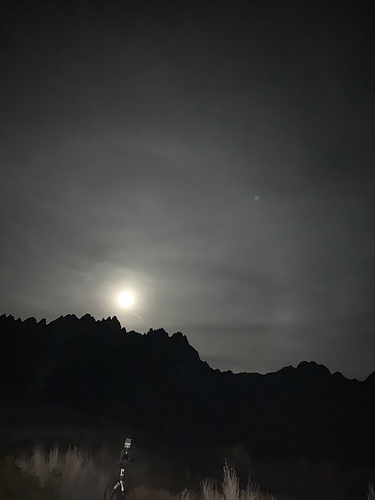 Cloudy here in Mid-Mo. Hoping it will clear up soon.

Same here in Stl. We got a couple hours of unexpected snow today!

I hope the viewing is better elsewhere.

Cheap Chinese long lens on a D750, not cropped, a bit of HDR though.

I’ll go outside in a bit to start making photos. 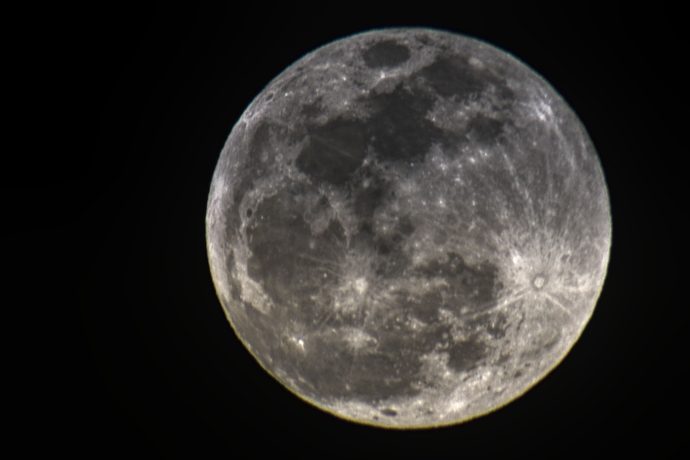 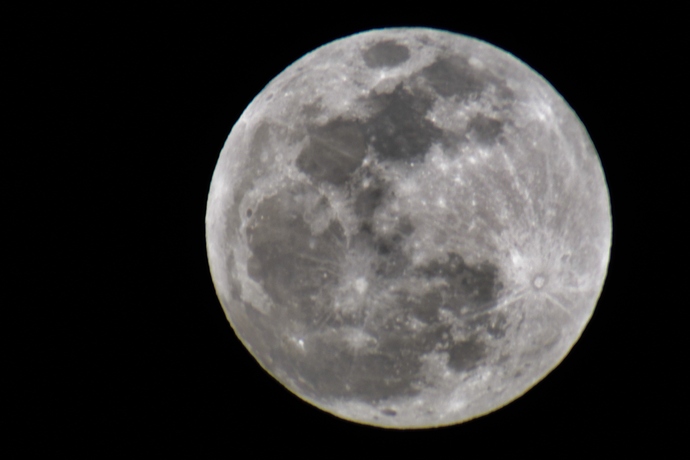 That must be one long lens for a full frame

Somewhere in that neighborhood. It’s not fully extended so not quite. Get the crop factor from the D750 too

Apparently, we are about 20 minutes into the penumbral shadow. I can’t tell yet though

Picture of a picture, that’s zoomed in on the display 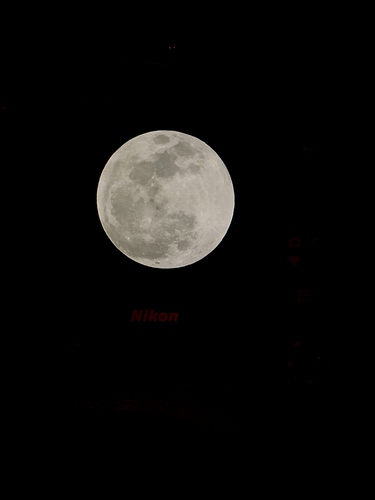 I can’t tell from here yet either.

I’ll be popping in and out for the next 90 minutes or so. Work comes early tomorrow.

i was kind of surprised when i looked tonight (just now). i heard it was going to look closer than usual, larger. it isn’t very large in the sky here. the harvest moon we had christmas night was way bigger in the sky. and it’s still white.

I can’t tell by eye really, but exposed properly through the camera, I can see the shadow starting. 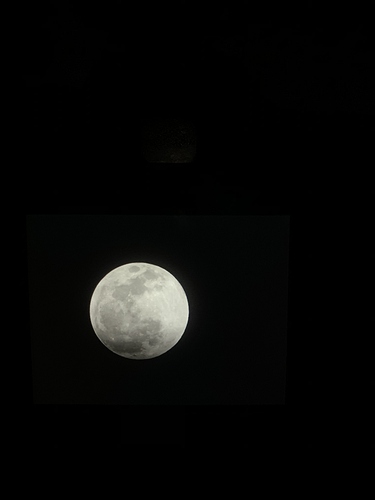 It’s kinda cool to see more and more stars become visible that you normally can’t see with the light of a full moon. 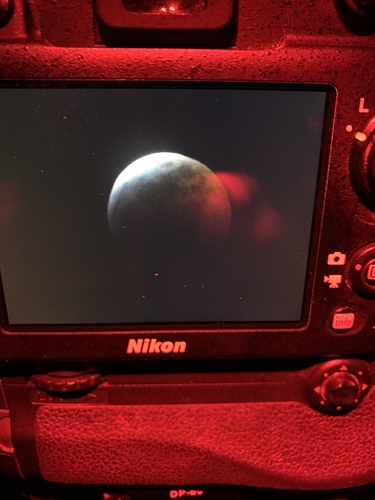 Some cell phone pictures (sorry, I’m way too lazy to dig out my real camera) 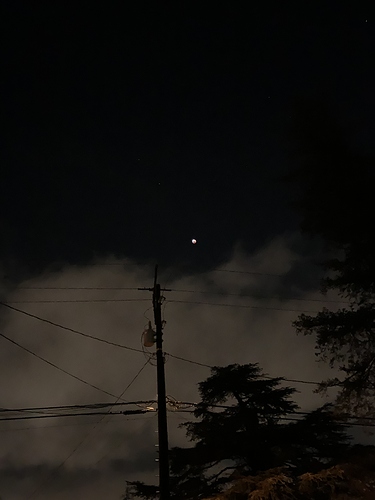 Of course auto-exposure makes it way too bright. Naked eye is more like this: 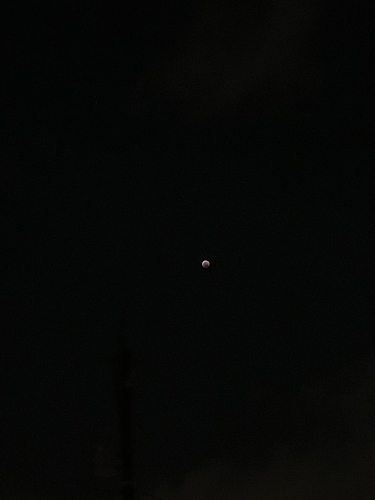 haha…yeah. my phone looks even worse than that. Almost covered now and the red is starting to show up well. 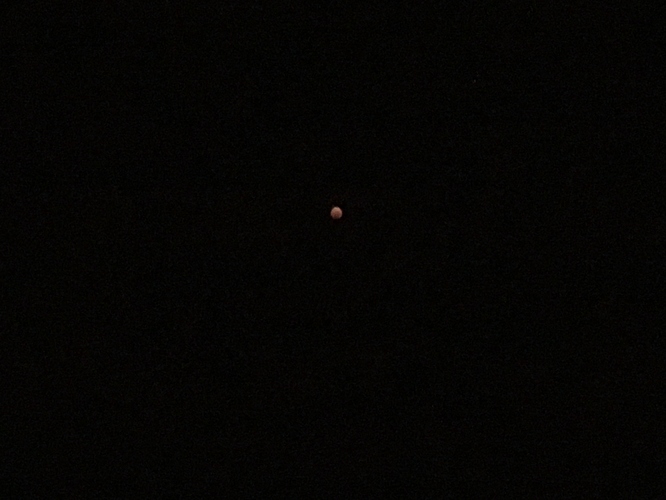 That’s the best I got.

Almost lost it in the dark but almost straight overhead. Partly cloudy but shows up mostly. Looks smaller high in the sky than at first.

Here’s a pic at maximum, notice the stars in the background: 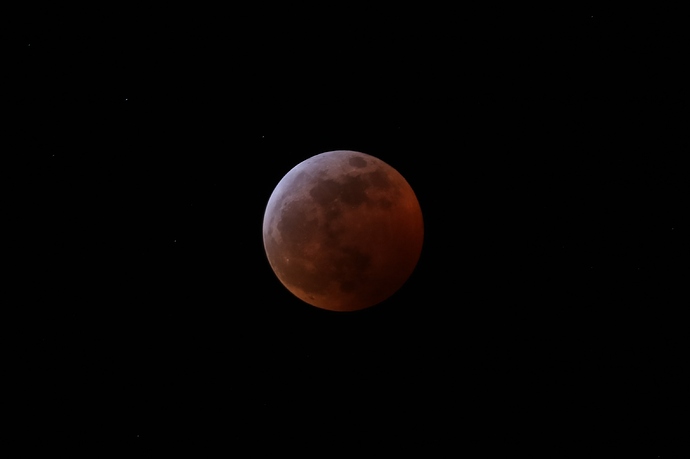 Super cool! This picture of a picture isn’t working for me. I hate night shoots like this because I know I’ll be up late checking them out. 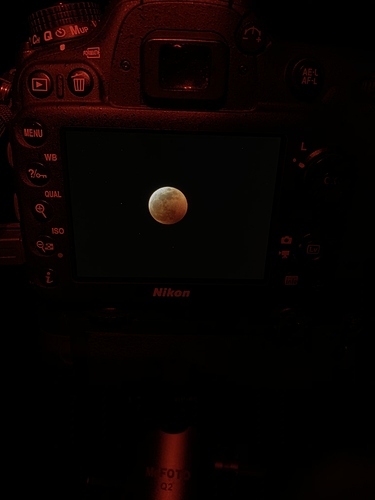 I know I’ll be up late checking them out

And that’s why I called it quits at maximum. Figured I didn’t need to see the show in reverse!

Also have the D750 - love it. I don’t do much photography with it and only have a 50mm portrait lens. Been meaning to get a cheapo zoom lens one of these days…especially wish I had one tonight, oh well, there’s always time.

Here is probably the best I got with a 58mm tele lens I have from shopmoment.com, binoculars, and my phone: 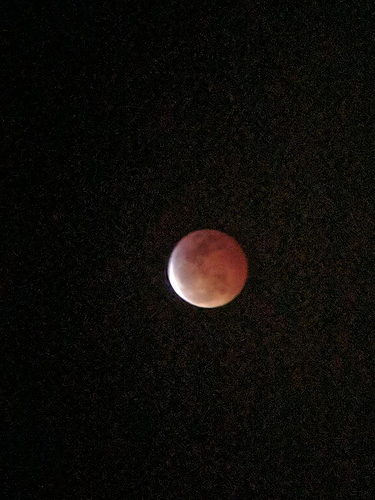 Also fooled around with some long exposures trying to spell my name, but the best I got was “rad” 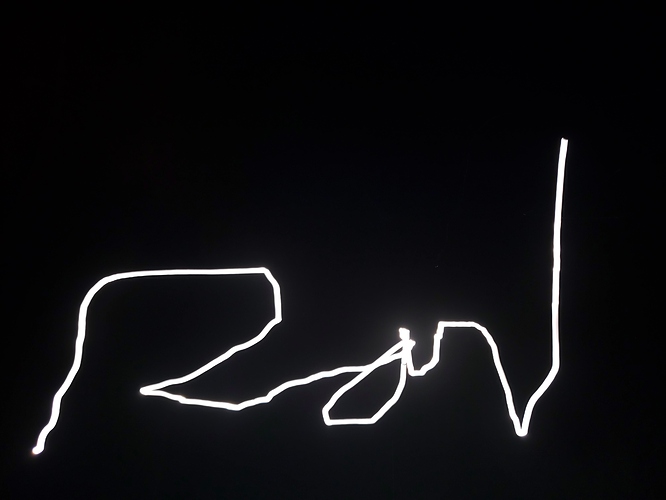