Made a simple pendant for Holocaust Memorial Day

As the son of a survivor I thought I’d give it a go, using 3mm maple. Think 2nd version will be slightly better as I speeded up the laser on the dark bit … so should produce a light burn on both parts 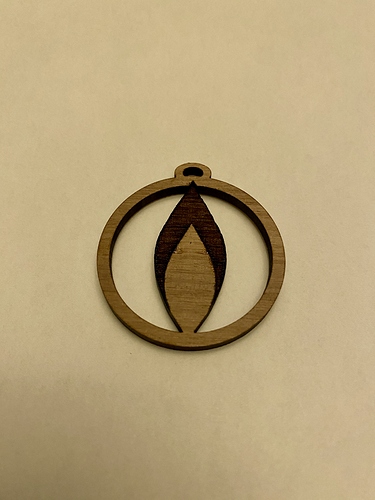 Hopefully will turn out ok

Lovely! I’m working on a project now that has flames in it and I like that one.

Nice job on that! 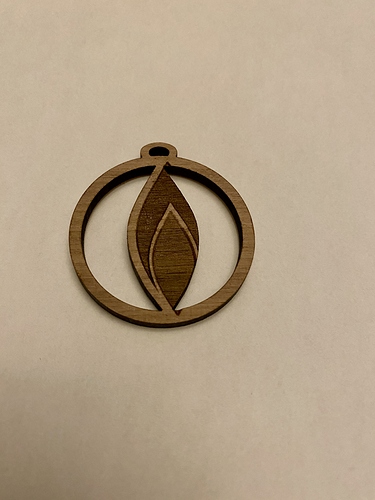 (There was meant to be an un layered border around in the inner flame), no idea where outer came from).

The non beta stuff seems to cut perfectly, Need to find manual sensible settings - really want to do lighter engraves than defaults, even though I have used different colours (in Affinity Designer using GF profile), engraving from SVG always does same power.

SVG (or PDF) simply defines paths. There is no correlation between “colors” in a design app and what the machine does with those paths. You define that in the GF UI. The only thing “colors” are useful for is grouping a bunch of objects together so they can all use the same setting.

I did think that, how do I modify from proofgrade settings?

Click on the arrow to the right of the PG setting, or select Manual. 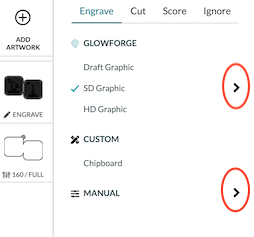 I realize this wasn’t what you were going for, but this is beautiful in and of itself.

This can happen if you’re aiming for a pre-cut piece and the focus misses, so then your camera image in the GFUI is off. Or, if you were cutting from a full sheet, it’s possible something got bumped in between the steps…

I think your mention of Beta speed is probably the source of the problem. Looks like it skipped, just like mine did. I noticed the same behavior when I was going too fast, and then I noticed with smaller pieces (mine was 4"), the head takes so much time to slow down it was actually a much faster job to reduce the zooms. On small pieces I find that over 900 zooms it really doesn’t speed the job up, and the times increase with the speed.