For many years, my wife has hosted a table at our church’s Ladies Luncheon in late April or early May. This year is the 20th edition, and my wife decided to host two tables, and thought it would be a great time to put the Glowforge to the test.

I thought it would be a great way to 1) justify the purchase, and 2) get a good bit of free marketing – either for referring others to buy a ‘Forge, or to drum up a little business for my hobby / side business.

The brunch is tomorrow, April 28th, and setup for the tables was today. Let’s just say that the tables have already been labeled a HUGE success – by my wife, and several of the other ladies who have been setting up for the Brunch.

Several people have asked if I would like to make various things to sell their retail shops, and one of the other ladies sent my wife a message complimenting her on what was done, and said that her son has been going on and on about wanting this 3D Laser Printer called a Glowforge, and asking if by any chance that was what we used to make the placemats, decorations, etc.

Before she even told me, she volunteered me to do a demo at our home! (I think I see my first referral coming……

ANYWAY…. The theme of the brunch is “(Yours is) A Story Worth Telling” and the invitation had an old Royal manual typewriter on it, and various library book items. My wife’s vision (which I got to execute) was to make placemats for one of the tables to be the typewriter (which I engraved on PG draftboard – at one per sheet) 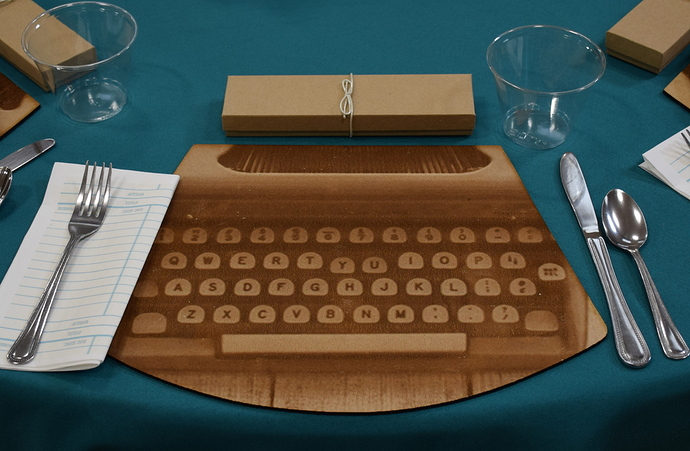 and the other to make Magnolia placemats as she grew up in the South, and magnolias (and flowers in general) are a key part of HER story.

Well, after looking at many different Magnolia pictures, we managed to narrow it down to one she really liked, and we ran with it. Engraved on White Proofgrade Acrylic, they turned out great – with an engrave time about 89 minutes each for the magnolias and 88 for the typewriters. 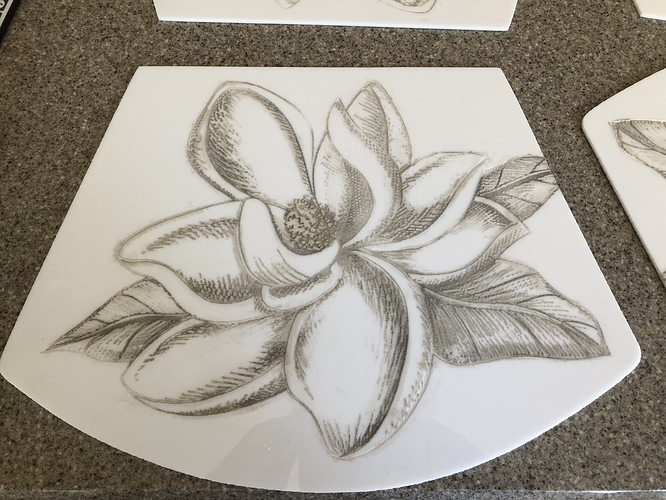 Note that there are eight places at each table…. So 16 placemats, 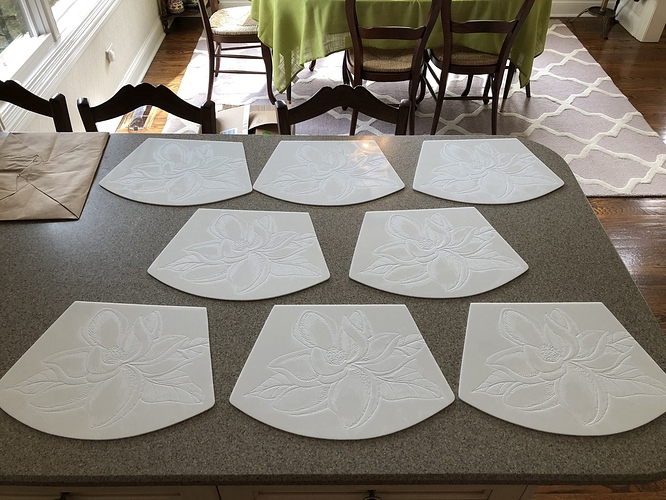 She also wanted boxes with Bible verses and / or “story” sayings, so I was able to take some of the box designs others had shared, did a bit of tweaking , editing, and stretching, then easily added Bible verses and other sayings to them. (And for putting them together, I love the rubber mallet I have… 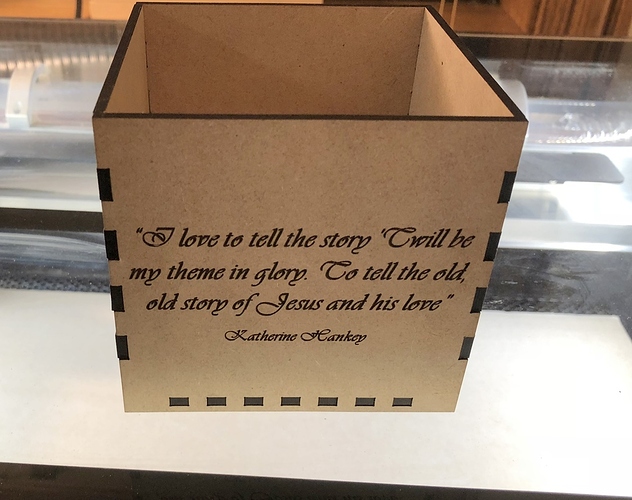 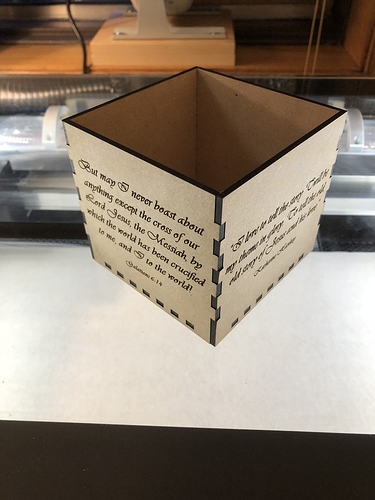 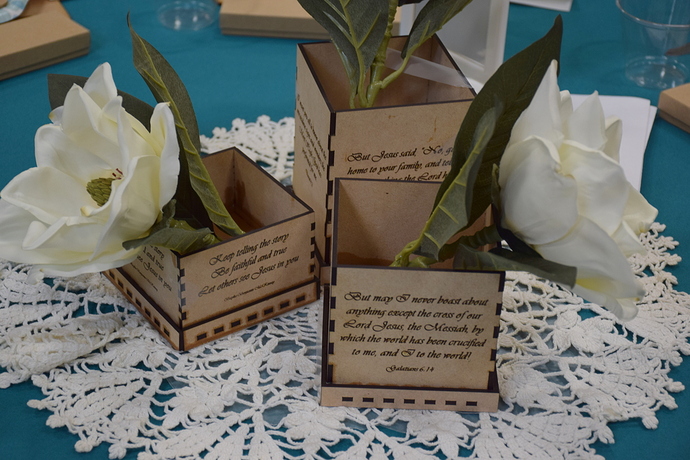 Yes, for those of you who are doing the math, (and because draftboard engraves MESSY), it forced me to do my first cleaning cycle. (It DOES make a difference)

The Typewriters just required weeding – but after the first one, I quickly determined that for large engraves, it’s much easier to peel the masking first. The magnolias were finished by using a mix of acrylic paints to get a general grey color for the lines, and a little gold for the center of the flower.

She also picked out pictures of her parents, grandparents, and my grandparents and we printed them on sheets of vellum (actual printing, not glowforging) to make pillar lights surrounded by silk magnolias for one of the tables. 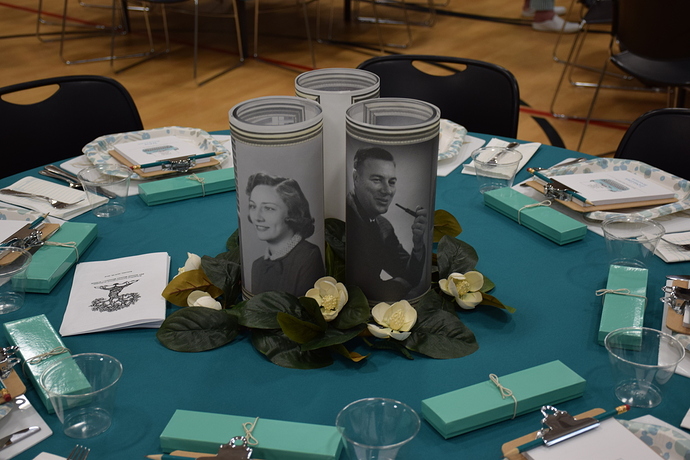 Separately, we have two sets of “book decorations” that are the old Readers Digest condensed books that had been artfully cut into the words “LOVE” and “FAMILY” and sold at a local department store 5-10 years ago. Over the past few years, we’ve had an issue with some of them staying standing, since the books tend to open up and spread out.

That would be a problem, but I have one of those 3D laser printer things…… Geordi (la Forge) to the rescue…. A little bit of measuring with the calipers, a bit of Inkscape work, and I was able to easily cut out draftboard “frames” that fit nicely around the base of each letter, kind of like a little “skirt” that holds each book closed and keeps them standing nicely. My wife took those to be used on other tables that did not have someone decorating them. 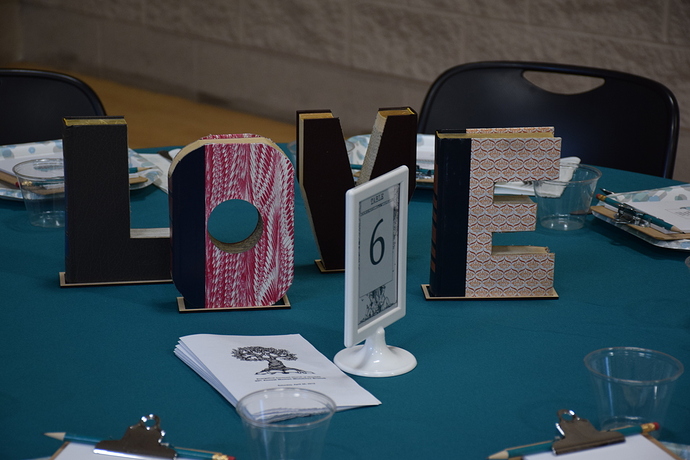 Here are a few more pics of the tables. 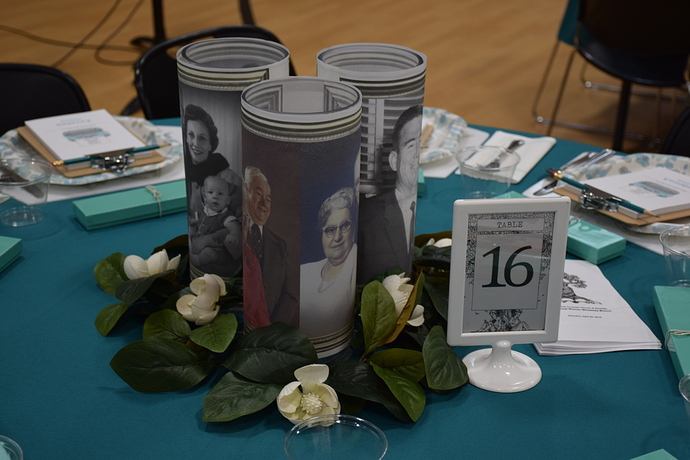 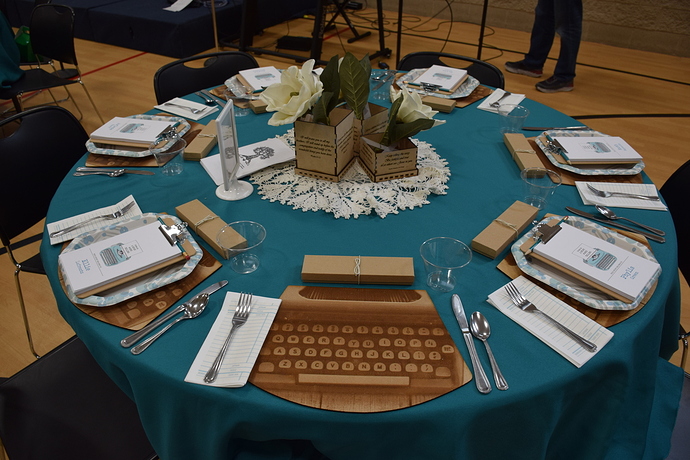 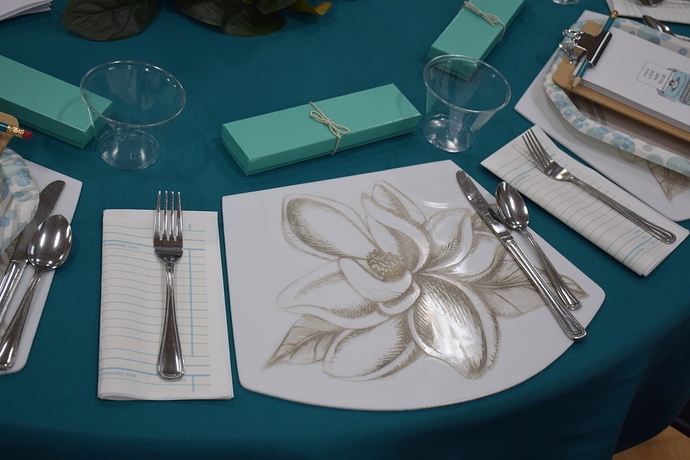 Early on, we were going to use a round charger instead of the placemat, but my wife used it to experiment with various paint colors and styles before deciding on what to use. Thanks to all the suggestions / tutorials that others have posted, she was able to easily experiment and find what she liked. 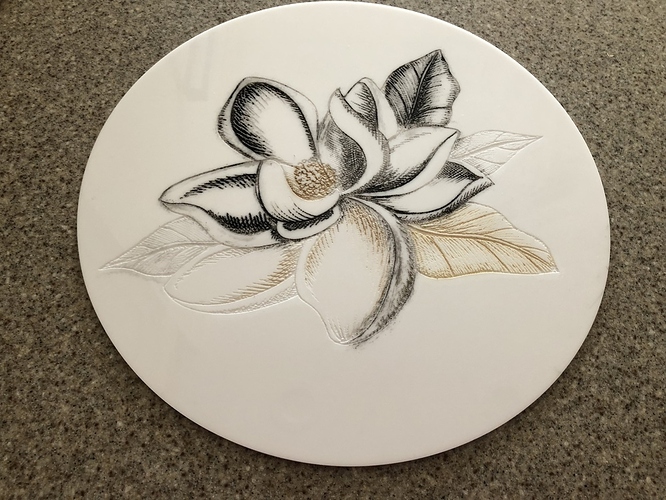 Here is an early version of the Typewriter I used, trying to cut down the engrave time. Lesson learned: You’ll spend less time just running the high quality (draft, but at 175+ LPI) engrave than trying to tweak it half a dozen times… 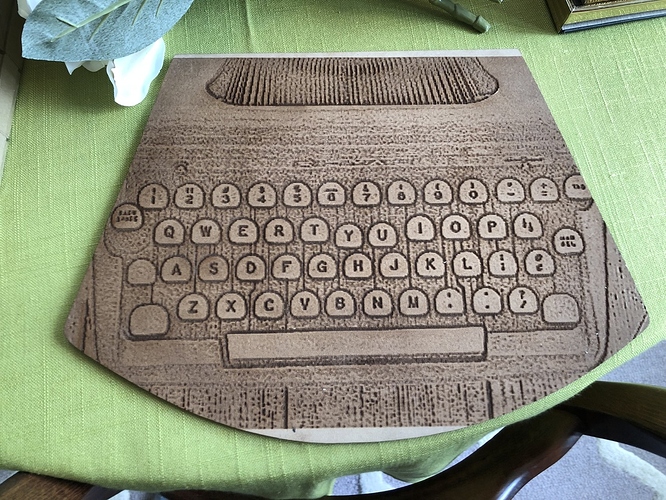 The magnolia placemat on PG White Acrylic before painting: 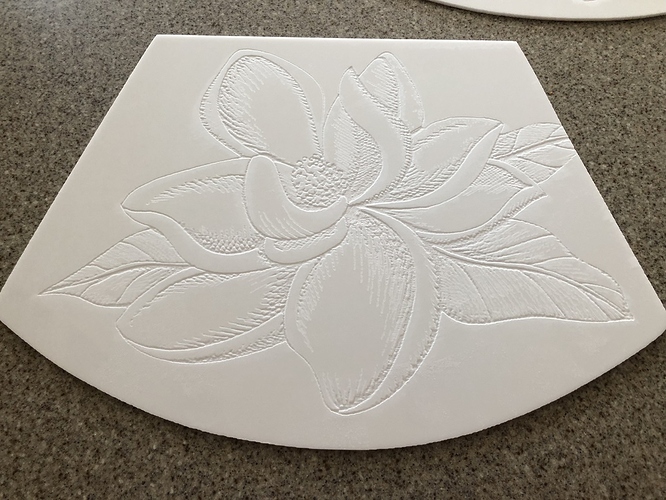 Great job! It sounds like you really put your heart and soul into this one! Is this what they mean by happy wife, happy life?

Exactly. Plus, it was a GREAT way for me to learn a LOT of things - both in terms of what to do, and what not to do with the 'Forge.

Thanks Jules. It means a lot coming from you…

I think you ought to sell the design.

What an outstanding job on many different things…it all looks quite wonderful!

But dang! That’s fine! I might have to see if I can find an old typewriter to take a picture of. It makes such a unique table setting.

I’ll check with the organizer on the source she used for the invitation to find out if she has the rights to it. I took it from the original file she used, so we may be in the clear. I’ll let you know either way.

Wow. So much effort. So worth it. Beautiful results.

Awesome stuff! I love the typewriter one!

Every part of this beautifully assembled display is simply amazing. Lovely job!

I am sure that your brunch will be a great success. You have certainly set the bar high with this one.

What an incredible job! The amount of time you dedicated … your wife surely is happy with all your efforts. Beautifully done!

What a wonderful table arrangement. You must have wowed the diners!

It was a big success. Thanks Dan for making it possible!

Wow. You are so generous with your work! Excellent stuff. Inspiring.