Finally got to put my GF to work! I received it just as we were about to move to a new place so I decided (with plenty of pain in my heart) to unbox the GF once we moved…

And, so I did - I chose Marvin the Paranoid Android as my go to character… 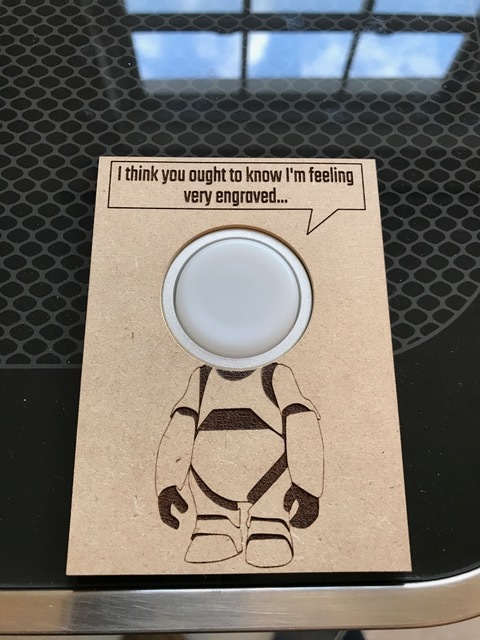 It’s my 3rd print and the first I designed from scratch on Gravit Designer & Affinity Designer - something I also am learning as I go so I’m doing some things on one and some on the other while I figure out strokes, shapes, paths, etc…

One question, while I’m at it - how can I make the engraving less deep? Is there a magic trick to it?

One question, while I’m at it - how can I make the engraving less deep? Is there a magic trick to it?

Reduce the power and/or increase the speed to decrease engraving depth. Look forward to seeing photo!

Loved this series! Very cool, thanks for the share!

It turned out great … You’re officially off to a great start!

“Brain the size of a planet and they’re using me to push a button, how depressing.”
-Marvin

LOL! that is great.

Excellent job, I love it!

Lasers? Don’t talk to me about lasers.

So those noises your computer makes when it’s turning on isn’t a calibration routine, it’s just sighing because it is melancholy