Here’s something I always wanted to make, and a big reason I got a GF in the first place (since then, I’ve found hundreds more things I can make!)

It’s a machine that rolls balls in different tracks and changes tracks each time. The pattern is called an ABACABA pattern and it’s the same structure as in binary numbers. (Perhaps you can see how the machine is counting from 0 to 127 in binary?)

The balls fall on a xylophone, 8 notes from an A to another A one octave up. It literally plays “ABACABA” (which continues “abacabaDabacabaEabacabaDabacabaF…”)

The lifter took the most work. I’ve made a nice battery pack since I took that video. The motor is a worm-gear high-torque motor that turns 15 rpm runs on 3v. Each gear has 16 slots, so it delivers 16 balls in 4 seconds, or one note every 1/4 second. More or less.

Really cool machine! I can watch it count by reading the positions of the gates.

Excellent job. I love it.

Amazing to see a Glowforge involved in the genesis of this. Someone makes something like this and, when they show it, you just stop and stare.

Fun project! Thanks for sharing.

Had me in a trance

This is so cool!! great work!

That is great! Love the lift

How satisfying to see your efforts manifest.

This is super. I love marble machines. Somewhat of a Sisyphean element. It is a great attention holder.

Wow, that’s really well done. Reminds me of the Digi-Comp II marble calculator kits from the '60s - except much more elegantly realized, and with musical elements to boot. Really impressive.

The Unbeatable Dr. Nim Everything Else

I might take a stab at building one of these games: I fondly remember playing Nim in a discrete math class in college.

I still have an old Digi-Comp I mechanical computer (3 bits, 3 flip-flops, no marbles) that I bought in the mid-60s after saving my allowance. Many years later, I saved my allowance and bought a Glowforge. 8^)

Come to think of it, I could use the Glowforge to replicate almost all of the parts for the Digi-Comp I. I’ll put that on my list of projects to try.

Now this is a fun project!

I think I see some Wintergaran influance there. Am I mistaken? If so you really nees to see the Marble Machine X!

I’m a big fan of this guy. https://www.youtube.com/watch?v=IvUU8joBb1Q

I just got back from NYC Toy Fair and got to see this up close: 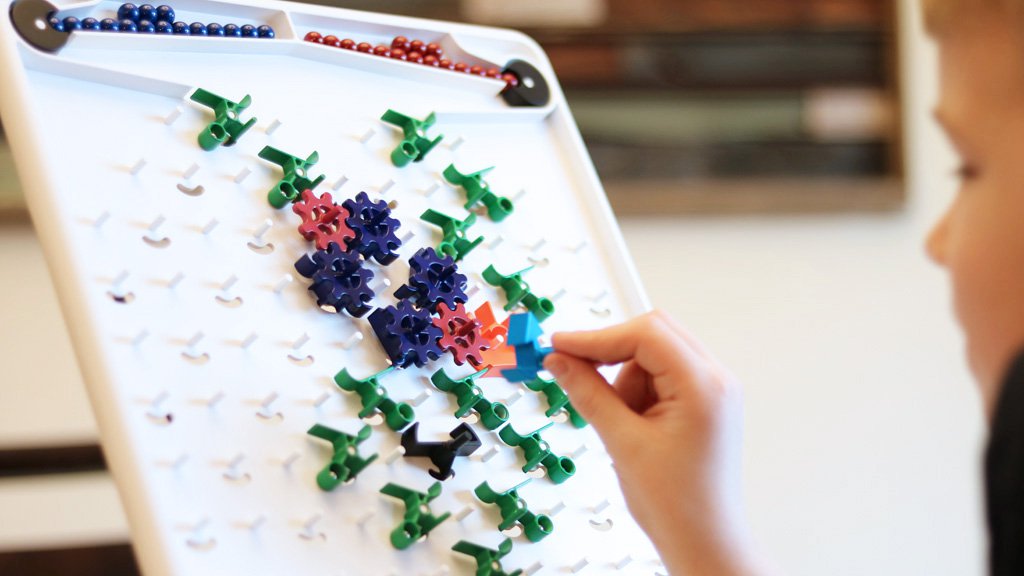 Turing Tumble is a revolutionary new game where players build marble-powered computers to solve logic puzzles. It’s fun, addicting, and while you’re at it, you discover how computers work.

Kind of an update of Dyna-comp II but as a construction toy system. Comes with a nice manga comic/project booklet. What is interesting is that besides selling a complete kit for $70, they also offer a virtual kit online for $15: you get the files for all the plastic parts so you can 3D print your own at home. Interesting–that is the “future” that many early 3D printers were hoping for in early days.

I, of course, immediately started thinking about how to make something like it on the Glowforge, out of acrylic. Would need to do some development/research on a a good design for snap in swiveling parts (I envision a square axle (a laser cut feature the same width as the thickness of the material) snapping into a round hole…sadly acrylic does not want to snap, like ABS, it’ll chip and shatter…hmmm)

I think I’ll start instead by making a simple thing like an Avalanche game (70’s Parker Brothers marble toggle game). 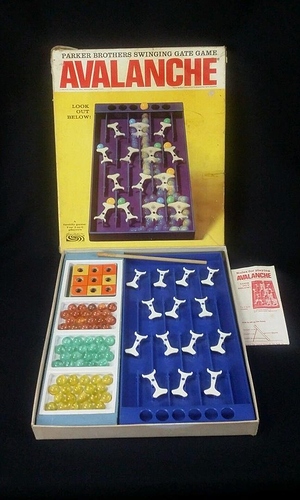 Anybody here do that yet?

Oh wow – we had that avalance game when I was kid! Don’t remember how it worked, but I remember playing and thinking it was cool. An early influence on my thinking perhaps?