). Almost 4 weeks ago the email arrived in my inbox and I didn’t know what to think. After such a long wait, my anticipation for my own gforge was only a minor itch at the back of my mind anymore. Not because I wasn’t ready for what it could do, but because I didn’t want to drag my wait time out anymore than I needed to!

With that said, about a week after receiving my email my proofgrade materials arrived, but no forge in sight

The email had said give them up to six weeks, and I was prepared to do so, but the anticipation had started to mount after receiving my materials. Again, I had to be patient.

That is, until two days ago I got another email saying my machine was finally on it’s way hoozah! I input the tracking number into a wonderful app by the name of Aftership (fantastic for keeping track of your tracking numbers and updating you all in one convenient place). To my surprise if said that my forge was going to be delivered the next day. Which is surprising because I live in Hawaii! Regardless, I thought I was reading the transit time incorrectly and dismissed it. Yesterday I received a notification that, yes, my package was in fact going to be delivered that day!

UPS typically doesn’t arrive until 8pm my time, and I work until 7-7:30 so I wasn’t too worried. My wife was going to be home in the impossible event that UPS got their act together and delivered earlier than the usual. Which, of course they did the one day I would have never guessed

. She had sent me a few Instagram messages and texts telling me to go check them. I already knew before finishing the text why she had added so many exclamations onto the text.

A while later I was notified that the eagle had landed at my home. I was fortunate enough to be able to leave closer to 7 and hurried home. I’m not the type to let my emotions take over, and my wife was certainly more excited for me to get home and set it up. I’ll be honest, I had no idea how large it was…If you’re familiar with the movie Dodgeball, you may remember when the main actor is offered a decent chunk of money (at least 250,000) the briefcase is opened and it’s one stack of cash a couple of inches thick and the quote used is,“There’s something lost in translation in the movies.” this is in regards to how small the stack is compared to what you’d expect.
Anyway…

This was quite the opposite. The pictures I had seen before gave me the impression that it wasn’t nearly as big as it is. Here’s a picture of my wife standing next to the box! 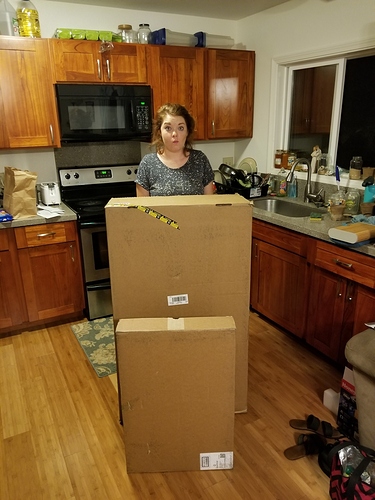 So I cleared the space that I had designated for it (and happened to be just big enough, so much for extra desk space!). Got it setup, and immediately ran into the cooling error…to my dismay I had to wait. And wait. And wait. I went to the forums to see if there was any ray of hope and read a few worrying things. It’s much hotter here than the “safe” operating temperatures, but it had had plenty of time to cool down so I was didn’t know what to do. I unplugged it. Disassembled the parts that were safe to do so, and gave it a minute unplugged and off. I moved the laser head to below the camera as well, turned it on, and voila! I was up and running. I of course cut the founder ruler, which is truly an amazing thing to behold in person.

With the mindset I’ve had over the last two years, I had zero designs made or prepared. I had one specific one in my mind that I knew would be my first when I learned how to use it. I prepared the design last night, and then finished it this morning. Sent it in, no errors were detected and I hit that print button for the second time. It was a 26min print, and I stood smiling there for at least 23mins. I am hooked.

This post is getting a bit long, so I’ll just post my images that I’ve taken. I also took a time lapse, but I’ll have to upload that later as I’m going into work now. 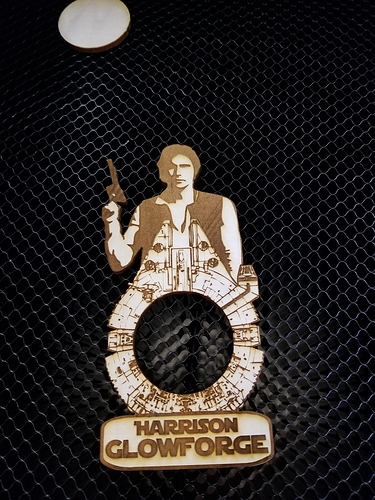 Also I had realized that the circular cut out was usable, waste not want not, right? 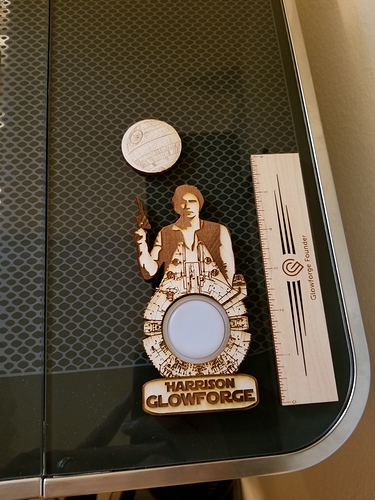 And finally, I was just blown away at the contrast and results of the engrave. I had to take a picture to believe it! 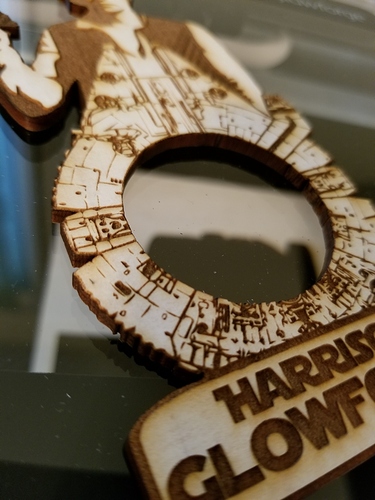 Long story short: This was absolutely worth the wait. I thank everybody that has contributed to the forum over the last two years, and supported those who may have otherwise returned their devices. I sent a pic to a friend who was skeptical when I ordered it and he’s so jealous! So if that’s your motivation, then this is the perfect opportunity to rub it in haha. Again, thanks for the support and I can’t wait to be able to put Harrison to the test

Oh fantastic, and I LOVE your escutcheon! Very clever!

Can’t wait to see what else you create!

Congrats! I hope you enjoy it! Remember to update the spreadsheet.

Good news all around. Enjoy!

Awesome first project! Have fun (I know you will)!

How clever of you! Congrats. Enjoy the ride.

So cool! I love that you didn’t waste any materials!

Glad Harrison arrived unscathed and that he’s made himself right at home!

I love it when someone gets an undamaged one first try and realizes that the wait has been so worth it.

May the Forge be with you.

the perfect opportunity to rub it in

Yes! Those who didn’t think twice about taunting you deserve it - along with a nice custom engraved “I told you so!”

I’ve known what I’ve wanted to name my forge for a while, and so once I started seeing them be made, I knew I had make one as well!

I hadn’t even thought about using it until it was sitting there on the bed all by itself. It had occured to me that my measurements may be off and that I would have to either utilize the hole or make it wider. My initial thought for if it needed to be filled was clear acrylic with one of the most famous quotes, “Never tell me the odds” printed on it. I may end up making another one because I like how it looks in my head, and I need an excuse to keep cutting things

With the state of the box my proofgrade stuff arrived in, I was worried about how the forge would turn up. There was no need for worry, though, because it looked like a brand new box by the time it had arrived. I’m under the impression that it’s because it was handled far less than a box that travels from truck to truck, whereas I got the airplane treatment. I could be wrong, but it bodes well for the international folks!

I didn’t live here 2 years ago, but things change! I was a little worried that because of my new location I may be treated as an international type delivery, but it seems I still made the cut. As for the name, I felt quite witty when I thought of it (and a bit of a nerd), and I was paranoid that my witticism would be duplicated by someone who received their forge first. Glad this wasn’t the case! I’m not entirely sure on other shipments, but I think you may be right about my being at least one of the longer trips for a forge to arrive. Hooray!

This is so exciting! Congratulations! You’d think it might not be quite such a big deal, since I already have my own, too…but yes, it IS a big deal and I loved hearing about how you were so glad you stuck the wait out.

To paraphrase “My lack of glowforge disturbs me!”

The Forge is strong with this one !

Awesome story…thank you for sharing. Love hearing these plug and play victories.

Absolutely love the name and the escutcheon (always have to cut and paste that word…lol)
Cant wait to follow and see whats next for you!!