Hey all, I’m wicked new to this whole thing and still learning my machine and materials.
I ran a full sign through my pass-through before realizing that the MDF wasn’t cutting through AT ALL. I’ve switched over to running it on two passes and have moved past the issue.
I’m just wondering what business-savy users are doing to make up some of their cost off of materials and prints that could otherwise be salvaged? The sign itself is flawless, but I’m at a creative slump in terms of salvaging the script since there’s no chance of me removing it from the MDF it’s still attached to. 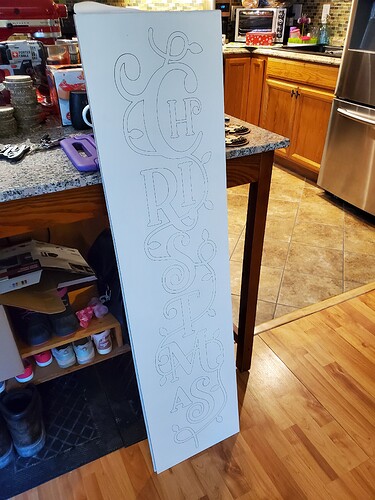 so you made other successful cuts?

what about using one of those along with a trim router and with the successful cut as the pattern/template. run the trim router around and cut it out?

You could remove the “word” masking and spray paint it. (Different kind of sign, but still cool.)

Are you using the board with the cut out letters as a sign? if so why not glue the shapes you have cut out onto the board that* was not successful. the raised look might be cool. And like @Jules said use the masking to paint the board nice colors.

All REALLY good suggestions!
Thanks!

I did. I ran off two of the exact same thing before it started giving me issues. Now my forge isn’t cutting the MDF I bought with this batch at all. I’ve fully cleaned the machine basically every day since it arrived and I’ve only had it since 11/30.

is the material completely flat? I know that has “burned” me a few times.

That I know of, yes.
I haven’t tried running MDF today just with how discouraged I got yesterday. I went through the long pass in this thread, as well as 3 of the smaller scroll work for faux shiplap plates it cut through with no fuss. I’m thinking it may be the amount of detail with the material that I’m using???
Either way though the mess and soot it’s making cutting it with two passes now is a PITA.

mdf is one of the dirtiest things to cut. you might consider getting one of the bigger fans and turning off the internal fan. I did that and my clearance for the smoke is much greater

I bought an in line fan when doing my research for minimizing the noise since I’m home with a 3 month old. It definitely helps, but the material still comes out so dirty.

I’m thinking it may be the amount of detail with the material that I’m using???

There was a point in the past that the power remained the same even when the speed slowed or stopped at a corner that the laser blew a hole even on a circle as it still had to start and stop, So I am sure that the algorithm to adjust the power must be a nightmare it is just a bit light (which is better than too strong) so long straight cuts are hotter than a lot of squirrely curves. Knowing this I adjust the power/speed accordingly, usually cutting the speed by ten or so depending on just how complex the curve cuts are as I would prefer a slight extra power in the straits to going in with a tool to finish the curves,

I have also found that one strong cut is generally better than two lighter ones unless you have something ( like zebrawood ) likely to start a fire.

So for a lot of curves I should slow the laser down?? Am I understanding that right?

So for a lot of curves I should slow the laser down??

Like when you are driving a car on a tight mountain road, there is a maximum speed that you can still stay on the road vs a long straightaway without such limitations. As a result the laser powers down where it is forced to go slower but usually overshoots just a bit so the result is that lots of tight curves do not cut as deep as long straightaways. When the laser did not adjust the power levels the opposite was true to a much greater degree.

This is done automatically so for you the only point is realizing that lots of tight curves will not cut as deep as straight lines, when using the same settings. Not a lot but if it barely cuts through on the straightaways it won’t make it through on tight curves,

Gotcha! I’ll try slowing it down when I try again and post my results.

Thanks for the tip!