Bunch of stain (which is a lot darker than I planned but it still looks ok), some glue, some nails… Starting to look more like a gingerbread clock at this point. Everything but the molding on the base is

cut home depot birch ply and the base is quarter inch MDF for weight.

Everything measured (aside from some design changes to facilitate easy access to the back of the clock) from my parts clock circa 1864. Since I’ll be using modern battery operated pendulum and clock movement, I had to make the back removable so I added finger holds (hence the cover plates you can see) and held on by four neodymium magnets. 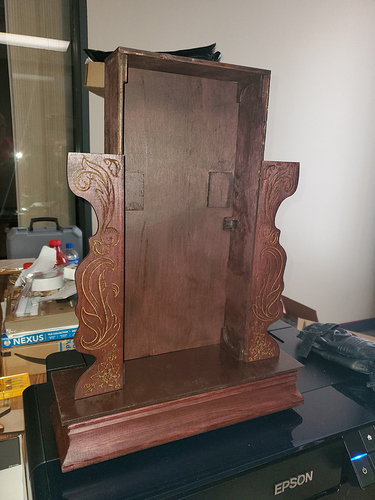 Couldn’t find a real bezel to use as the originals used a metal pan/plate the face was glued into and the bezel was integral to it. Struggled for a few days to find something I could repurpose to make into a bezel and then I realized I was an idiot because I own multiple 3D printers. I broke out the CR10S Pro and Fusion 360 and hammered out a bezel quickly… Then turned to photoshop to create the face from scratch as well. The results from that are thus: 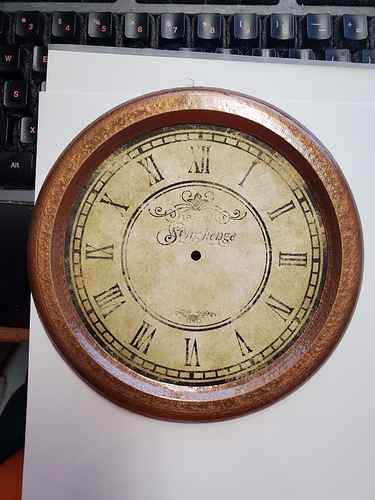 I know it looks “rough”… I could route edges and do a bunch of cleanup… But part of what I’m trying to create is a “vintage” look, and to keep it as “original” looking as possible. Ansonia cranked these things out in the millions (literally) and they really are as rough as this looks. They didn’t try to hide that it was plywood or do much more than slap a bunch of paint on them. They were interested only in getting them put together and out the door as quick as possible. And yet… they still hold up and work 150 years later. So aside from a LITTLE bit of prettying things up here and there after I get things mostly put together (still have a bunch of design work on the “crown” area as well to go)… I’m going to leave it “rough”. I might even beat on it a little bit to give it a well worn look.

Nice–but I admit every time I see “gingerbread” in the title, I expect to see real gingerbread for baking… though do understand the reference to “gingerbread victorian” style

I really like that “distressed” old-timey face. It’s gonna be a real showpiece when you’re finished!

It’s a nice reproduction, and I think you achieve the look you’re going for. It looks great especially your 3D printer work and photoshopped face.

Looking forward to seeing the finished clock- nice use of 3d printer!