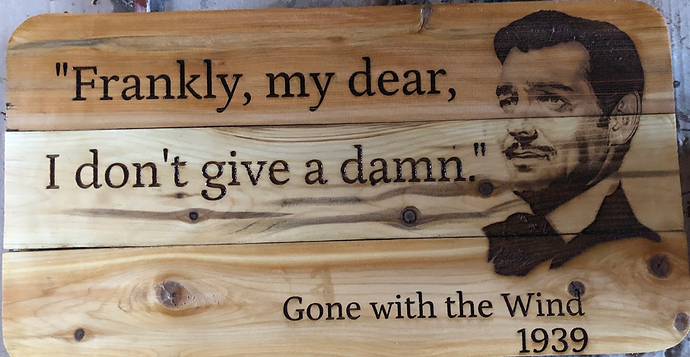 Hi-
I’ve been making LOTS of movie quote signs on the glowforge during shelter in place.

My idea was to make the signs for whomever submits quotes, if I pick their quote, they get the sign after shelter in place.

I’ve made 40-50 so far, using the glowforge premium trial for the last 6 months. I’ve tried to use different fonts on each sign, to see what was available

Here is the google album if you want to see a bunch of signs, or just get some ideas of movies to watch while we endure the pandemic:
https://photos.app.goo.gl/Yp3thQ3ZCa8r3ngq9

I had some feed back on glowforge Premium:
1.) $15 a month seems high. $5/month seems more reasonable
2.) Has anyone noticed any speedup of jobs since premium started? or are we to expect the free jobs to start running way slower?
3.) While I LOVE that we can add fonts in the interface, we can not have those fonts follow a path, or even rotate letters, both features I would expect if you are paying $180/year for the software use.

I am wishy-washy on whether I want to spend the $15/month … I like the font selection better at dafont.com, much more choices, and the fonts are organized unlike glowforge interface.
But, it is quicker to not use inkscape to create fonts layed out the way I like.

I’m curious as to what others think?

As long as I am giving feedback, I was wondering, have they created a way for you to see how many hours of lasering you’ve done on your glowforge?
I saw it mentioned years ago as a desired feature, but have not seen it yet.

I really don’t want to be negative here. I LOVE my glowforge and want to say thanks to all the people who created and support glowforge

That’s lovely - especially crossing over the seam it looks seamless!

2.) Has anyone noticed any speedup of jobs

It’s processing time - not lasering time - so the time between when you hit Print and the white light comes on. I don’t tend to do crazy complicated jobs so I don’t notice the difference, but those doing 8 hour engraves where the processing took 20+ minutes likely will.

I feel like the premium is really targeted at people who don’t do graphic art, but want to run a business with their

- which, to be fair, is a large portion of purchasers. The commercial licensing on the images alone is gonna be worth $160/year to many. I’ve got the premium now, but it’s mostly cuz I’m at home all the time now and it seemed like a cool thing to try out. If $160/year was big money to me I’d drop it like a lead balloon.
YMMV

Still in the Hopper AFAIK

have they created a way for you to see how many hours of lasering you’ve done on your glowforge?

In the interest of failure analysis, I would expect those metrics to be monitored.

Wow, you did a wonderful job on this.

“The thing about self-made men is that they don’t want to tell you where they got the parts.” From my own writing here.

“News is what powerful people want to keep hidden; everything else is just publicity.”
…Bill Moyers

If a man tells you that the Government cannot accomplish anything of value, then voting for him would be like hiring an Amish Auto Mechanic.
If they don’t believe in the concept, they are more than likely to do a very poor job of it…

Also from my own writings

More recently I refer to the Amish NASCAR team.

I really don’t want to be negative here.

On the other hand you should be honest. I don’t think constructive criticism is negativity, it’s an opportunity for Glowforge to see how their services are perceived.

Speak up if you have concerns, compliment when you think it’s deserved. We’ll always respect honesty and thoughtfulness, and I think Glowforge will too.

It’s highly unlikely Glowforge staff will see your feedback on the Premium offering here. They typically don’t browse the forums. Dan might drop in on some of the most popular threads.

Post it over in the discussion thread dedicated to the announcement.

Some really great signs! I think my favorite is this one!

I understand it was processing time, but that is the speedup I have not seen. But I’ve never had an eight hour job either. (When I did some large jobs, the glowforge would not process it)

But I have done some very repetitive tasks (creating 50, or 100’s of the same thing) It would seem for jobs of that nature, a “REPEAT last job” would save processing time. Am I alone in doing this type of thing? As I type this I have 30 more of these to get done for a fund raiser.
(I can only fit 3 at a time on the glowforge) 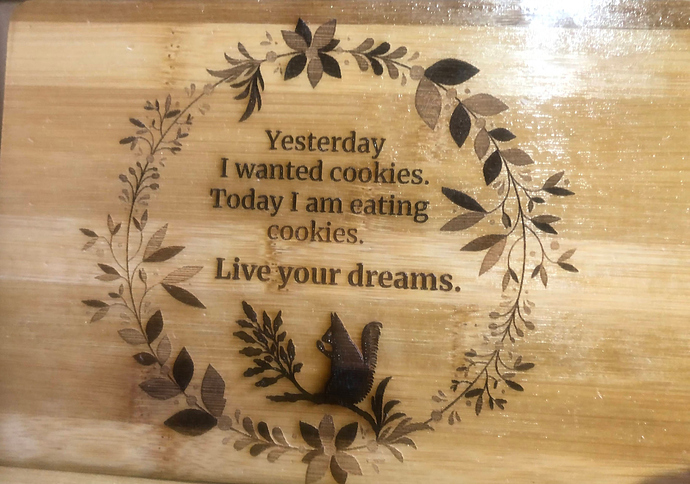 Lovely idea and post. And I really appreciate your thoughtful discussion of Premium and the design features.

No. In fact, they recently improved processing times for everyone.

Great selection of quotes. Weird, but two of my favorite quotes are from the same actor. They seem diametrically opposed in content:

Truth. You can’t handle the truth.

You make me want to be a better man.

This has been requested many, many times. It would save GF money as their servers would not need to recalculate the job. Still, it never gets done. If they did, I’d put money on them making it part of the premium package, despite the fact it’s financially beneficial to them by itself.

Wow I saw your pictures you have been busy. I love all of them but Up is my favorite. Nice touch on coloring just a few of the balloons.

Considering you have sci-fi stuff, you might enjoy this billboard that was put up in Atlanta when he passed. Not a quote, however…

I’d put money on them making it part of the premium package, despite the fact it’s financially beneficial to them by itself.

I suspect that the memory involved would be considerable. Far more than the svg

I love that billboard!
I want to hear that it was made on a glowforge, 19x11 inches at a time.

Memory should not be any more than what it takes to run the job once.
If I were to implement the UI, I would have a repeat check box, before you click print. You click print and then the Glowforge servers calculate the code to move the laser. Then the light lights up, press it, it starts job # 1.
Difference is, when it is done, the light lights up again.
Replace materials, press button again job#2. Repeat as needed. No need to recalculate.
It would necessitate using jigs to have the pieces in there exactly the same each run. But totally worth the time savings.

Having no idea how their API is written, I am not sure what would be involved. I do have spare cycles while I am retired and happily lasering these days. Give me a holler’ :^) I can come in from the woodshop and code some.

The response given way back when is they have no way of knowing if you’ve bumped the head, or put in cardboard instead of wood, or anything else that could cause catastrophic issues. There is a business side that says “but I’m responsible” but have you seen how many people have burned their

and PG settings still managed to burn their machine to the ground because their repeat was not set for whatever it was they did.