Did anyone attend? I so wanted to go this year. Watching Tom’s video’s from last year got me interested in the MPCNC and dig deeper into the whole world of 3D printing. Too bad it is Lent and I got to much going on with church and it’s about 8 hours away. Thought of just doing an all night drive, but had to let it go.

Discuss 3D printing. We have lots of folks here and I think that anyone who has a 3D printer really could use a Glowforge because flat things just get printed so much faster!

Never heard of it!

I was there. Actually handed out a pile of keychains to folks that I made on the glowforge as well. It was a blast. 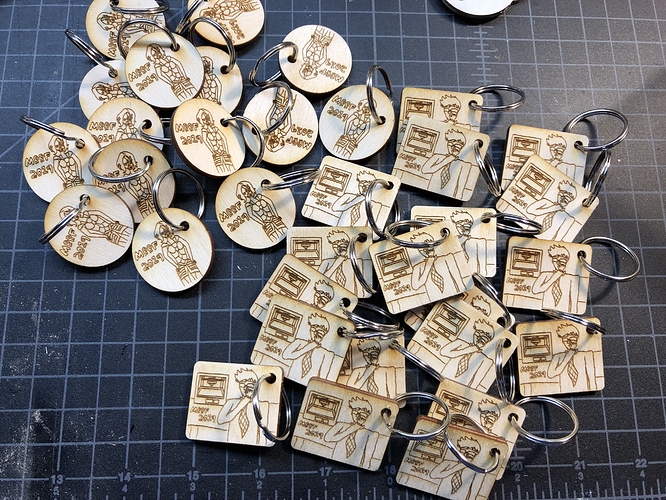 Here is my twitter account, I posted a lot of pictures of you want to see them.

Yes. It’s uber nerd. It’s the main 3D printer meetup aside from being part of MakerFaires and other expos. Kind of home brew and not near any big city, it is amazing. The 3D printing companies come and display. Would love to have talked to all my 3D printer heros, especially the E3D folks and see what Prusa is up too.

There was always a crowd following Prusa but it was cool he made it. This was my first year to MRRF but I will definitely be back. I’ve attended several Maker Faires as well but I really felt I was with my people at the MRRF. Pretty much any of the big names made it out. I spent some money at the PrInted Solid and E3d booths as well as a few others. I also ran into some old nerd friends as well. My daughter went with me and she’s now asking me to print her a few things based on some of the stuff we saw there. It was great to see some of the new and emerging tech. I just ordered a Filadry filament dryer, he had an impressive display and product.

When I did a Glowforge exhibit at Bay Area MakerFaire 2017, I hadn’t gotten into FDM 3D printing yet. I saw all these folks and knew they were the movers and shakers in 3D printing but I had to let it go. I did talk to Angus from Makers Muse and started watching his videos and that helped guide me into buying a printer.

I can’t imagine Josef Prusa’s work ethic and schedule. He does so many of these shows. That has has managed his brand so well is very impressive.

Same with the E3D guys. It does help me to see the people behind the companies and get a sense of what leadership is doing. Like @dan here.

I was supposed to go this year and last but work got in the way both times, plus it is really not that easy a place to get to.

There is talk of doing one on the west coast too, that would be a bit more convenient

Josef is a good bloke, and funny. It’s amazing how quickly he has scaled that company, even with big competition from Creality and co.

My Mk3S just arrived, I will be recording the build and comparing against my Mk2

Love my mk3S (although not sure I love the lack of a inlet pipe at the top of the extruder). With older eyes hard to get the filament into the hole when the whole part is all black plastic…

So prusa people, that’s the one printer that almost got me to jump.

What’s the over under on the learning curve these days? How often to prints still go wrong and turn into huge messes? Is it still sketchy or do you print with confidence?

So prusa people, that’s the one printer that almost got me to jump.

What’s the over under on the learning curve these days? How often to prints still go wrong and turn into huge messes? Is it still sketchy or do you print with confidence?

No, 3D printing still sucks, but is sucks slightly less on a prusa. They worried about a lot of failure modes, but yeah failures occur fairly frequently (because the filament isn’t uniform, the moon is in pieces, you angered Minerva the roman god of art…). But if you wait the most reliable of the lot, it’s a Prusa mk3s. it also depends on what you print. I do a lot of industrial prototyping, and have broken a whole slew of printers (accidents with CF-reinforced-nylon are catastrophic to the printer) And bed adhesion is somewhat better, but still sucks (especially for nylon). If all you want to print is PLA things then it’s much better/reliable.

Yeah, at our makerspace we joke that 3d printers are disappointment delivery systems, but the Prusa Mk3 makes things as plug and play as possible with FDM technology. It even compensates for the frame being skewed or wires making bad connections.

I have owned and reviewed dozens of printers and the prusa and ultimaker models were the easiest, but the ultimaker is 3x the price of the prusa

I don’t have the MK3S but my MK2 is reliable for PLA. One thing to note is that the Prusa forked Slic3r makes slicing profiles easy. Something that shouldn’t be underestimated in the workflow.