Multipass for thin cuts on plywood?

I am making some very fine cuts on proofgrade walnut plywood. Is there any advantages of doing multiple passes to gradually cut the wood to keep the most integrity/strength possible? Think of cutting a lace pattern.

I may not understand the purpose of multiple passes. I think it’s was for thick material…

Attached are a couple of photos of what I am doing. It cut reasonable and held the lines - but the cuts are a bit angled by the laser. Will multiple passes allow me to cut more straight up and down (iis the term “kerf”)? 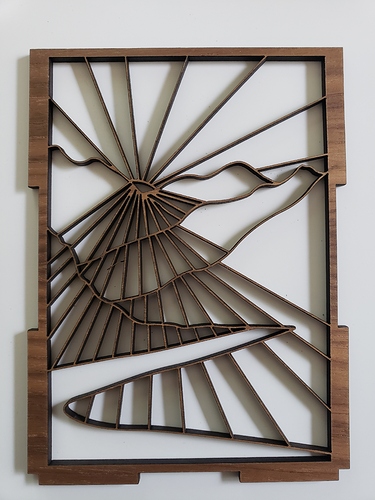 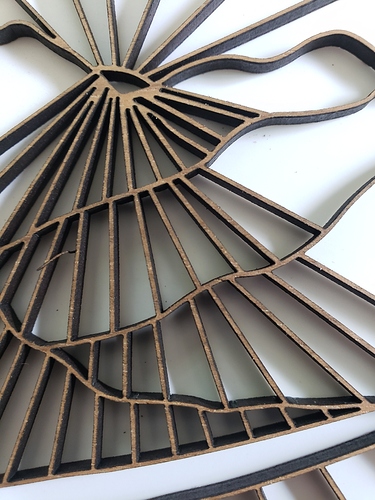 I can’t see any benefit to attempting multiple passes on wood. (It does help with thick acrylic, because that melts and slumps down). Every time you do one, the flame is going to eat away a little more material - and the additional air where the previous cuts were made is going to make it burn hotter, taking away more material. (Also charring a LOT more.)

The kerf profile is what you are seeing from the beam, and I think it’s going to be minimized (less slant) by going as fast as possible with the cut, at the highest power. You want to get through it and move on.

One thing I would do with that particular design to make it easier to remove from the base without breaking the thin lines is to drop some weeding cuts into it.

To Tree or not to Tree Made on a Glowforge

One last simple print to round out the week…this is that jewelry tree that I created last year, and I wanted to show you guys a couple of things with it… [image] The smaller one in the front is cut from Maple Proofgrade ply, the larger one behind it was cut from Lowe’s 1/4 inch Birch ply. I removed the masking from the Proofgrade before cutting it, because I actually wanted that smoky residue…turned out pretty cool I think. (Definitely more interesting.) But what I wanted to show you was t…

There is one major benefit to multiple low power faster passes, your kerf will be thinner and your char amount lower.

For ultrafine cuts yes a couple faster and lighter passes might improve things. You should test, of course, but it’s a known quantity.

I believe this is why @jbmanning5 multipasses (or used to) his puzzles.

A more vertical profile will likely only be possible with a longer focal lens (which isn’t available).

You might try stepping down to 100 power rather than full power to minimize kerf. That seems to do it for me when cutting puzzles.

If you’re in an experimenting mood, you could also adjusting the focal point to see how that affects the kerf profile. Run a job with the focal height at the surface, another at the middle, and one at the bottom. The middle might work out ok.

I believe this is why @jbmanning5 multipasses (or used to) his puzzles.

I’ve definitely done it. I would figure out the speed needed where 2 passes was the same as one slower pass, and it seemed to be pretty close. I think the moving down to 100 power is probably just as effective.

Theoretically, the lower the power, the smaller the beam profile is.

Thanks everyone! I am in debt to everyone else’s research. Seriously in debt.