My GF, Eitri, is feeling unwell

So after a year of sitting dormant, I tried to wake my glowy, Eitri, up with a basic, quick job, a box to hold a PS4 game box (extra storage) to wall mount. After several cardboard tests, we finally were ready to cut on PG draft board.

Here is where Eitri showed that he was sick. The engraved parts were fine but he did not cut thru any of the cuts. I tried slowing the speed and doing more than one pass. Nothing helped. I did a thorough cleaning, no luck. I scoured the forums, watch YT videos, and tried everything suggested. No luck.

I then reached out to Support and Brandon has been doing his best to assist. We did narrow down the possible causes: either the silver window on the left needs replaced (it does, its got some bad scratches there) or the whole printer needs to be replaced.

As you can tell, this second option was not on the table for me. Granted, I have had Eitri for 5 years now and haven’t done much with him except some hobbyish stuff but I wanted to actually start doing a big push this year. (just my luck, right?)

Obviously, I don’t think that Brandon can do this. That is a decision that probably has a lot more details to it and would need to come from higher up if possible.

While Eitri is down, he is not out. Currently, engraving still seems to be working. I will replace the silver window and see if that helps with cutting. If not, we will run a full testing cycle on what he can do with the materials we have on hand. Then, we will do what we can with that and go from there.

If you have had something similar, let me know what you did to help your glowy along. If you are going thru this now, feel free to hit me up and we can compare notes.

(it does, its got some bad scratches there)

That could easily account for the attenuated power. That material the window is made of is fairly soft I think, lens cleaning tissues are what you need. Paper towels and even Kleenex can cause damage.
A new window would be my first option.

If you have had something similar, let me know what you did to help your glowy along.

I paid the money for a refubrished replacement in lieu of repair.

Glowforge doesn’t sell just the laser tube, and replacing it is a complex and dangerous job (pretty extreme voltages involved, and you’d be doing the wiring). If they believe the laser tube needs replacing, the cost of a replacement machine should be $499 including round trip shipping, as that’s what they advertise the cost for a tube replacement to be on their website (on the FAQ page).

It may well just be time for that either way… the tube is rated for a 2 year life expectancy and you got 4+ out of it which is great.

the price MAY have gone up, be ready of it did.

A new window would be my first option.

The slightest thing there can cause a mess, a defocused laser can make a mark but it can’t cut very well or even engrave as normal (though that may be less obvious.)

Usually, if that window is bad the results will differ from better on the left and worse on the right as the defocusing spreads out over distance. I have seen the slightest film I could hardly see make it so the laser did not cut through and a quick wipe with the lens cleaning tissue restored the cut like new.

Yeah, the official guidance is to clean at around 40 hours. I see a film on the left window after about 4 hours. I clean the two windows around that time. It could be close to 40 before the lens and mirror need it, but I hit them as soon as any change is visible.

Window has been ordered and I got an extra to be safe. Also, I will be getting the Zeiss wipes that they recommend. Looks like the ones I have are not soft enough and could have added to the damage.

Even if it has gone up a bit, that is still better than paying for a whole new printer. Not sure why that was not given as a option from GF Support unless they are trying to get away from it.

The optics are life of the machine parts, if cleaned periodically.

Had mine for over 4 years and they are still perfect.

Update: Got the new window and the Zeiss wipes. No change.

I have started putting the material one higher than what it is (ie. Thick Draft instead of Medium Draft) and that has been working to a degree. Also when doing a slate coaster, i have to have it at Full Power to get it to do anything.

I have already sent an email back asking if i can just get the laser assembly replaced as that was not given as an option (a new printer was. i cant justify that cost). I am limping along with how he is now but would like to get him back to fighting fit.

I will take a moment to acknowledge that I did neglect the poor thing for a couple years but I wasn’t in a great place mentally. Finally there and want to use my

more and the laser is not working. I thought the meantime to failure would have been extended without use. (for context: I bought my

I will update again when I get a response from Support.

would have been extended without use

Normally, this seems like it would be the case, however the tube will degrade over time whether you used it or not. It has a shelf life.

AH this! This is what I was wondering!!! I feel that I may need to get a new tube and i would be good. A support rep named Ivan just emailed me asking for additional video of the tube while a test cut was running, which i have sent.

Hopefully he can get me some numbers and i can get it sorted.

Please keep us updated on your progress!

Update: Seems to be working if I force more power thru it and do multiple cuts. But this isn’t going to help if i want to do thicker material.

I reached out to Support again and they offered 2 solutions: 1. a remote fix to try and reset some back end details. 2. Switch out for a refurb at the cost of the replacement tube.

So we attempted the remote fix. No luck.

I have agreed to switch out to a refurb and have started that process. I will let everyone know when I received the “new” machine.

For now, I am doing anything I can to get more hours out of my current machine to not feel like I have lost so much time with this.

Ok the new machine just got here today and hopefully I can convince the BF to help me get it upstairs and the old one out.

Opened the box and the lid is broken. Need to go back to support and figure out next steps.

As in, the glass is shattered?

thankfully not that bad “broken”. The lip of the lid is not glue properly and is flapping about. So if I were to remove the orange tape, it would most likely fall off. You can kind of see it in the below pic. 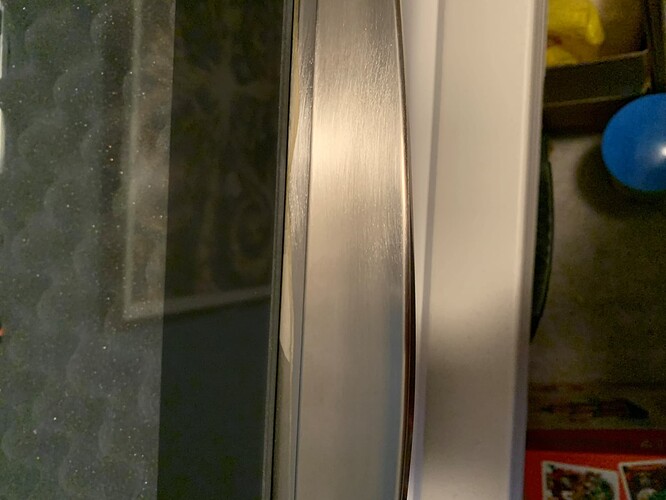 Support may authorize you to glue it on until the replacement arrives.

We’ve seen a few of these lately. Hopefully GF sits up and takes notice.

So Support wants me to mail this guy back and get another one. Waiting on shipping label now.