I have literally seen local delivery scum dump entire containers of mail into a local creek where I would often see them taking a nap. I reported it, postmaster just said “can’t get good help”… I believe that is a felony.

One even had the audacity to leave a note asking for a tip around Christmas time.

Sounds like a job for the postal inspector, which I would expect to function at the speed of government.

Postal inspectors are among the most feared of law enforcement. I would file a complaint with the postal service about the dumping mail. I would start with the mail dumping at USPSOIG.gov and the missing package with your postmaster. With supporting documentation of course.

I reported it, postmaster just said “can’t get good help”… I believe that is a felony.

This needs to go higher and that postmaster needs to be gone. Yes, it is a felony.

I’m very fortunate here. Our mail carrier is great, and both USPS and package delivery services have been super reliable.

Gives me time to complain about other things.

Pretty soon that will come to mean, “melting fast.”

I just send three cases of nutritional supplement to someone quite ill. The delivery notice stated that it had been placed in the mailbox. I guess there wasn’t a box to check for " left it with the doorman".

I guess there wasn’t a box to check for " left it with the doorman".

“Delivered to Agent” is one of the options they can pick.

It states left in mailbox. It was not.

Mail has always been terrible here. I was on the IBM “mail quality” team for several years until they killed that program. Certified mail test pieces would show up with the cards removed. I think in 5 years, they came to the door once. That would be 100 or more pieces they were supposed to get a signature on.

That postmaster just gave the answer I said (“can’t get good help”) so I went to the larger sorting office and they said the same thing. I reported it to IBM but nothing ever came of it.

I have had stuff sent that made it to my local office for delivery, then was whisked off across the country. One was a very expensive piece of optics for a rifle that made it to Memphis, another was less valuable but went all the way to CA after being here in Atlanta. I also had a GPS unit with data from a record flight delivered to a house nowhere near me, I just happened to spot a package on the porch of the abandoned property. It’s nuts.

A couple of years ago, I purchased a large product for my smoker. A coal basket. Came from China. Wasn’t too expensive but the mail carrier literally tossed it from the walkway to my porch. I had/have video of it. It was raining, the whole thing was soaked. Delivery instructions for all carriers say leave in garage (car port) - which is actually closer than my front porch anyway.

AMZ delivery at least gives you the option to provide feedback, nobody else does. Not that it matters. I’d say 8/10 packages AMZ are left on porch vs garage. UPS and FedEx seem to care and do leave packages in garage.

Meanwhile, I ordered some stuff that was delivered by UPS yesterday. No signature was required, so I was confused the guy rang my doorbell. He held up a small clear bag of parts and said “I found these on the floor of my truck. Not sure if it came from one of your packages or not, thought I ought to check with you”. It was from one of my packages. And I got it because: service.

I used to ship a lot of items USPS many years back doing large co-operative purchasing of electronic components, USPS was by far the cheapest solution but came with so many headaches. People would complain their package shipped from NE to IN was in HI or something totally wacky. Sorry pal, not much I can do at this point. However the local postmaster was always great help, I had his email address and he looked into several issues right away and always followed up.

The mail guy at my old house was also really nice, always felt bad for doing large (Like 100-ish) package pickup requests so I took them to the postoffice myself once and he stopped by one weekend while I was outside and asked why I hadn’t had any requests lately. He actually preferred me to have him pick them up since it had a positive impact on his numbers or something.

Now this lady at my new house… Yeah its gone way down hill… She puts three or four packages in the cluster large lock box and then puts the key in one persons box. So that person either A has to go drop the other three packages off or B just close the door unlocked now and hope the other three people know to check there for their missing packages… She also only goes about half way up to the house and then tosses the package to the front porch. The weekend lady is much better as she will walk all the way up and hid the packages behind the pillars so its out of sight from the street.

See, I am mad at UPS right now. Well I suppose its 50% Target and 50% UPS… Target just slapped a label on the side of a LEGO box and shipped it! UPS proceeded to destroy the box, loose 75% of the individual bags of legos and deliver it mostly empty. Guess one of the drivers kids got about 2,000 random legos… 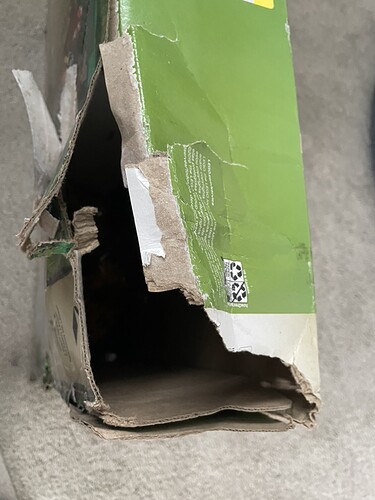 FedEx ground used to be a joke here as well but I “got in” with the person that managed our local station, she would personally bring stuff to me that her staff had failed to deliver. That was at my ex’s, though. The only FedEx stuff I get now is ammunition and they are a little more diligent with that.

DHL was the worst. I had two $7k laptops stolen in a row. The FBI got involved in that.

I tried but could not find the pic of the package my last dog had “opened” for me. She was so proud of herself.

The FedEx and USPS drivers would not get out of their trucks, but the UPS guy brought treats and the dogs loved him.

When he came, I would bring him a beer and we’d sit around shooting the breeze.

This may or may not help, but USPS Informed Delivery has an option to state when a package or piece of mail doesn’t arrive. Maybe it will go higher than your local folks. We have an excellent mail carrier here, but the mail delivery at our last house was super hit or miss. And I had a very creepy mail carrier experience back then, but I think I already shared that at some point.

I have that. It outright lies. I have watched our mail carriers drive right by my house and it shows mail was delivered.

I signed up when my daughter was in basic training for the army, because her mom and I would be waiting for mail from her. They would show mail being delivered that never was.

In all the years I was in the IBM quality program, I estimate at least 50% of mail was never delivered. That’s only based on the emails I would get asking “did you get this mailpiece” for certified mail. They sent a lot more “regular” mail.

This may or may not help, but USPS Informed Delivery has an option to state when a package or piece of mail doesn’t arrive.

I click that all the time, I don’t think it really does anything. Things seem to show up a day or two later regardless if you report it or not. Other things never show up, and I am never contacted. So far it’s always been junk so I haven’t cared to press the issue.