I’m trying to design a coaster with an engraved city map of downtown Denver on it. I’m working in AI and I have a square and an image of the map and I embedded the image. But the map is a little larger and different proportion to the square. So how can I use the square outline to cut away the excess parts of the map that are outside the square? Also, would it be better/faster to score the map or engrave it? 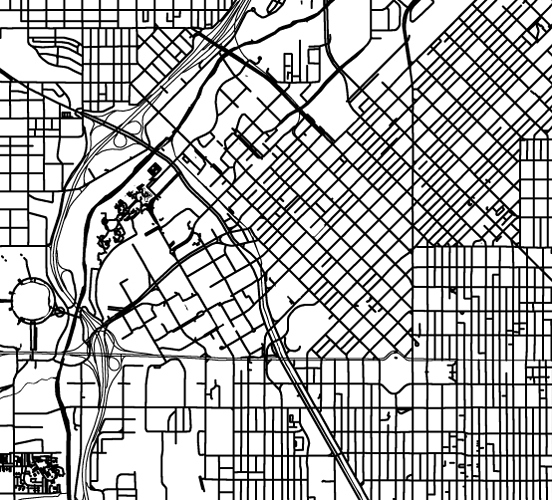 To use the map for a raster engrave, use the square to make a clipping mask, then rasterize the object.

Vector engrave score will probably be faster, although with that many lines, it may not. The lines would also be very thin unless you defocus the laser.

To clarify a tiny bit: I believe you mean “vector score” not “vector engrave”. Engrave is engrave and will be slow. A score would be much faster but you’ll be at the whim of the design with lines crossing and starting and stopping (which makes hot spots).

I think the advice about clipping, rasterizing and engraving is good stuff.

I’d score it rather than engrave. I’m (trying) working on some bathymetric maps right now and the streets are pretty easy (I’m a CAD nut) it’s the topo I’m having issues with in cutting the various pieces. Can’t seem to get it into CAD the way I want.

BUT - when I’ve done maps like this (and I’ve only done a couple) I’ve used linework and essentially “cut” at a really fast speed to score the wood. Turns out great and a LOT faster than engraving. Wish I could help with AI, but I’m not any good at that program.

I believe you mean “vector score” not “vector engrave”.

You are correct, of course, in the context of GFUI terminology.

I like the idea of using line art instead. Do you know where a good place is to fined line art of cities? or how to convert/ make one?

Openstreetmap exports their maps as vector.

the problem with scoring is that you would have to do a whole lot of work to get varying line widths. if you’re ok with them all being the same width or are willing to experiment with creating multiple scoring colors with different settings (i.e., defocusing and power/speed shifting) to try to fudge different line widths, then scoring may work for you.

Alternatively, you could create pattern brushes for each thickness. Each brush would be composed of multiple lines next to each other, offset slightly so the scores would be close enough to look like one thick line rather than multiple thin lines.

Apply the brushes to the appropriate lines, then expand appearance to get your multiple individual lines to score.

still could be quite a bit of work to go in and assign brushes to all the lines, even if you select by same weight, depending on your map file and how much variation in weights there are. and whether your map file has any fills as well as strokes. or some map files may actually be all converted to fills. really depends on your source material and how easy it is to adapt. i’ve had many instances where i thought, “this shouldn’t be too difficult” and then started working in someone else’s file and realized, “seriously, wtf? why would someone build a file this way? this is going to take forever to fix.”

So I decided to go with engrave instead of scoring. I think I set up the file correctly? But if someone could confirm it for me and or make some suggestions that would be great!(this is my first true design from scratch. I’m prepping for my Glowforge to arrive in a few weeks.) Also, should I make my coaster design in AI of just one(1) or should I lay out multiple on one file? Denver Coasters.ai (3.6 MB)

The great thing about street maps is that there are generally no more than 3-4 line weights, and the vast majority of roads are the same width. You may have very small alleys and residential roads in a thin stroke, but most will be a bit thicker, with major thoroughfares thicker, and freeways the thickest.

That’s assuming you’re working only with stroked art. If it’s all fills, I’d give it a skip and just raster engrave the whole damn thing.

it also presumes that the file was set up the way we would expect and cleanly. that, of course, is what’s behind my quoted hypothetical story above.

Basically, your way is better said but that’s what I was getting at with:

A score would be much faster but you’ll be at the whim of the design with lines crossing and starting and stopping (which makes hot spots).

no, i think that’s a different issue that’s related to how it will cut in the GF where lines intersect, stop/start, and change direction. i’m talking more about the issues of editing the file to make it work the way @slackk1994 wants it to.

I’m in the “engrave it” camp on this one.

Btw, I can see my wife’s office from here…

Thanks for the suggestions everyone. I’m going to close this thread - if the issue reoccurs, go ahead and post a new topic. Thanks for sharing your ideas and insight!