Because it had to be done. (See this thread) 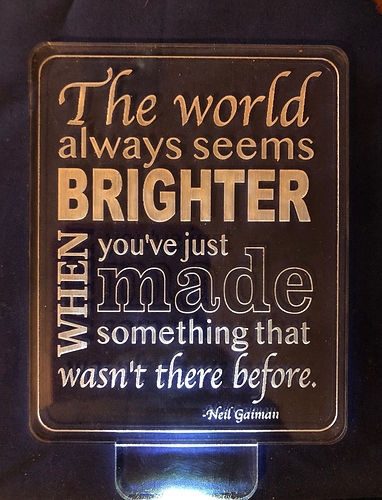 Update: Here’s a base to fit it that will hold a USB-powered LED chip (specifics in the linked post).

Must have for my workshop !
Thanks for sharing,

Nice! Thanks for sharing that.
I don’t know if you have encountered it on the forum, but a neat technique for engraving edge lit acrylic is to engrave progressively deeper as you go up, because the lowest engrave tends to ‘shade’ that above it a bit. That results in a more even lighting.

On This Christmas tree I used three different colors, splitting the tree roughly into thirds, with each a different color so I could assign a higher power as the design progressed upward. It doesn’t have to be much, just deeper than the engrave below it.

I had mentioned flooding an engrave with acrylic solvent, the flood to ‘polish’ the engrave gives a third option to a binary effect that gives a different detail.

Perfect quote for an edge lit!

Yeah, my brother (@TimJEdwards) pointed that out to me, too. I’m pondering how to handle the vector outlines–since there aren’t any breaks in the design like in your Christmas tree, it seems like rastering it is the only way to make it work, on this one.

(You have my sympathies re: the neighbors. I was thankful that we only had one of those, and then the nice guy on the other side sold his house to another one.

He doesn’t like our goats, wants us to pitch in $4K to pave the road, and won’t be satisfied until we agree to cut down every Douglas fir on our 2 acres, as he apparently is convinced any one of them might spontaneously combust at any second. Why do people buy houses in the country if they don’t want to LIVE in the country??? And PLEASE don’t anyone tell him I’m burning wood with lasers INSIDE my house!)

I had mentioned flooding an engrave with acrylic solvent

I want to try that too – just as soon as I go get some acrylic solvent. Or maybe Google will tell me I already have some masquerading under another name–I just haven’t gotten to looking it up yet!

I’m pondering how to handle the vector outlines–since there aren’t any breaks in the design like in your Christmas tree,

Psssssst! You’re talking to yourself again.

My Grandpa always said it was perfectly fine to talk to myself. He said if I found myself answering, then I should be worried.

On here you could routinely answer yourself

A couple weeks ago I had to write a PowerShell script to do something similar to another script I’d written a few years back. So I used that one as a reference. I found myself saying things like “Wait… Why would I have done that?” And then later going “Oh! Hey, that was really smart!”

I swear that when writing something I think people tap into something universal to the point that it’s almost as if “someone else” wrote it. Can’t tell you how many times I’ve had a similar experience to the one above and just thought “Wow. If I was writing that today I really don’t think I would have come up with that!”

Funny you should bring that up in this particular thread!

Back when I was in nursing (or was it grad?) school, I commented on Twitter one time about reading a paper I had written in the past and having one of those, “oh, wow, did I write that???” reactions, and wondered idly if “real” authors ever had those moments. Neil Gaiman actually replied to me. His response: “Always.”

Neil Gaiman actually replied to me. His response: “Always.”

I really have found it to be true so many times in my life. Thought it was just me!

Thought it was just me!

Definitely not just you. I wonder if it’s a component of “imposter syndrome.” I’d go look it up and find out, but it’s my day off.

That’s awesome! Thanks for sharing this and the stand as a bonus!!

I swear that when writing something I think people tap into something universal to the point that it’s almost as if “someone else” wrote it.

I believe that I experienced the 3D equivalent. I was repairing a plaster cast copy of a medieval carving from Lindisfarne, and allowing the chisel to follow the original line, as it ploughed through the extra plaster that I’d added, I felt the hands of the original craftsman moving the chisel under my hands. Seriously spooky at the time !

Really, answering is fine, it’s when you argue with yourself AND lose you really have an issue.