Ok…gonna date all of us here. My wife is sitting on the other end of the couch playing word games on her (my) iPad and when she gets stuck (angry) she hands it to me… last puzzle… r o u g e … r o g u e … m o r g u e … when I pointed out there was no " G R U E … disappointing… there should have been a Grue for bonus points!
… now … how many nerds?

Btw… all I got was a blank stare…

Not admitting to anything. But you are likely to be eaten by a Grue. Though if I remember correctly it was lower case “grue”.

I will admit nothing, and I believe all that information has been overwritten in my brain trying to remember all the characters Tatiana Maslany plays in “Orphan Black”.

I just realized that sentence gets tv nerd points.

I don’t have any idea what any of you are talking about…does that mean I am not actually a nerd?
But I have a laser! 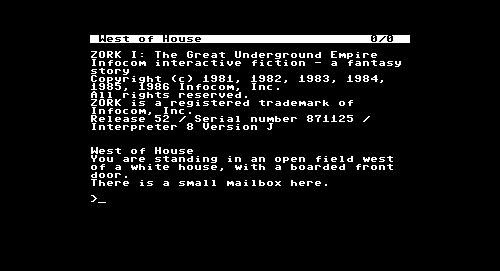 A Brief History of <em>Zork</em>

You are standing in an open field west of a white house, with a boarded front door. There is a small mailbox here.

Whoa…looks cool! Sorry I missed it.

You actually don’t have to… it is available… still entertaining after all these years. (Like you need another rabbit hole…)

there should have been a Grue for bonus points

But then she’d likely be eaten.

How about this one:

You wake up. The room is spinning very gently around your head. Or at least it would be if you could see it which you can’t.

It is pitch black.

Good start to the day. Pity it’s going to be the worst one of your life. The light is now on.

I proudly admit to playing this game on my Commodore 64 way back in the day. Man, life was a lot easier back then…

Played many, many games of Zork on at least 7 platforms over the years. (Didn’t really think that my personality would gravitate toward multi-player games, did you?)

Yep! Played Zork at work when I was supposed to be working…they actually had it on the mainframe and we played it on Tektronix terminals.

Also played Hitchhiker’s Guide, but on my own time.

Oh heck, I need to go check this out…

Playable on the web:

Ahhh, memories! @timjedwards and our other brothers and I had many happy late-night Zork marathons, back in the long-ago. <3

Good start to the day. Pity it’s going to be the worst one of your life. The light is now on.

As I recall, next would be…

You are now in a bathroom.

You see a sink, a toilet, and a cabinet.

Opening the cabinet reveals a toothbrush and bottle of analgesic.

You don’t have the analgesic.

make audible groaning sound and shake your head
Get analgesic

Your head is feeling a bit better now.

I went through many Zork games and only really got stuck when I did not think to burn the bra to get the wire to pick the lock.

I saw Zork on my Commodore 64 (and again on my Fidoweb CD) but was too busy doing stuff in LOGO to travel that rabbit hole.