Nerdy Toys I had when I was a Kid

Oh man - great thread. Same as a lot of people above:

Legos - TONS and TONS of Legos, especially the Space Legos (I’m now buying new Technique sets which are AWESOME)
Lincoln Logs (Look up how these were named - very interesting fact I didn’t know!)
Chemistry Sets (I miss the days when they contained actual dangerous stuff that you could do REALLY cool stuff with)
Laser Tag in the mid-late 80’s (we had a TON of fun in college playing this in huge parks at night)
Erector Set
150 in 1 and 200 in 1 sets (my brother did nothing but this in all of his spare time - he’s now an electrical engineer designing pace makers and such - go figure!)
Tinkertoys (we had the HUGE TinkerToy set that you could build huge structures out of)
Atari 2600 (Cmon - who didn’t spend DAYS in front of the TV playing Combat and Asteroids?)
Calculator (My parents bought me a Texas Instruments calculator for my 10th birthday in 1978. Coolest present ever to that point!)
Girder and Panel Construction Set (Wicked cool building set)
Mattel Handheld Electronic Football, Baseball and Basketball
Spirograph (You can EASILY cut one of these out of plexi on the GF)

SOOOOOOOOO many others. What a fun trip down memory lane.

Man Capsela was the bomb.

It’s close… original Capsela had hexagonal connectors, which made for 60 degree angles all over the place. This appears to be octaginally keyed so you’d see 45s. Cool either way.

My favorite was my TRS-80 Model I.

Calculator (My parents bought me a Texas Instruments calculator for my 10th birthday in 1978. Coolest present ever to that point!)

Oh I forgot about Calculators! I had a few, the TI’s were really cool, but my most coveted was the HP 28S. I still have it, OK I may be pretty weird but my heart raced when I thought about getting it out tonight.

I eventually got an Apple 2+. I remember when I was so excited to get the Chip so I could use lowercase letters.

Also had the Gilbert Chemistry Set.

One of my favorites! Everything you needed for really cool stuff!

I had a quadro construction kit… it was so cool to be able to build structures that were taller than I was, and then be able to play on them. My parents still have most of it, my mom reconfigues them into racks and stands for her various potted cooking herbs.

I don’t know if other colors were available when I was little, mine were all red tubes with black connectors. 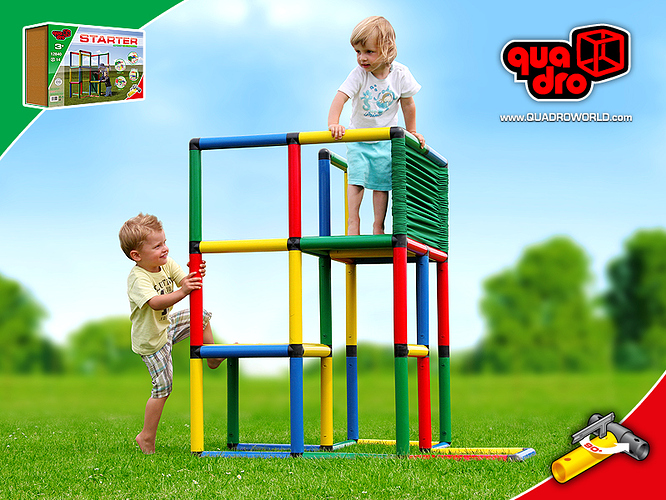 At my dad’s parents it was Legos and Lincoln Logs. At home it was tinker toys as youngin’s then I went to constructs and both my brothers went to k’nex.

Turns out big trak is been rereleased and is available again.

I’m glad they make one with more capability because I would think in today’s world the old big trak would be pretty rudimentary.

in today’s world the old big trak would be pretty rudimentary.

Well one of the major probems with the BT back int he day was that it had no sensors to verify its programming. That is, a 90 degree right turn was “90-ish”. With a modern gyro/compass, you could easily verify that and get a whole lot more accuracy.

I can’t confirm that they did that, but it’s definitely possible.