This morning I was making some acrylic ornaments, and didn’t realize @dan and the team snuck in some new etch settings. I was really happy with how smooth the etch on the acrylic was before, but now it defaults to “SD Etch”, and I think it looks horrible.
The etch is much deeper, and you can see the laser strokes, and the ends of the path aren’t smooth.
Has anyone else noticed this, and which setting is most like the previous graphic default, which I liked, and will unfortunately be “Expiring soon!” 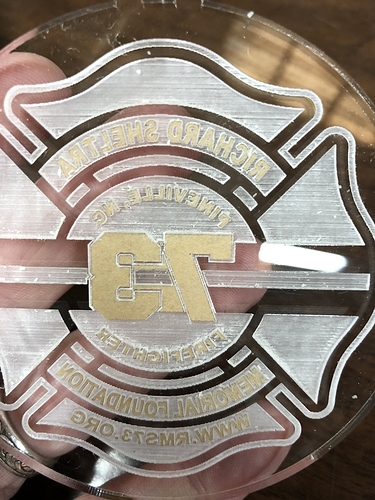 You can see what the settings are by switching to “Manual Engrave” after you selected the setting.

Changes to settings should cause a local warning message to appear in the GF app when the affected settings are attempted to be used. When possible, translations of settings from old to new should be provided.

People will be wasting a lot of material because of these “silent” changes. And the logs of settings that we keep talking about become obsolete.

Are we really supposed to do a test cut every time we print something just to make sure nothing has changed?

I hope GF will replace ruined PG material and reimburse a reasonable amount for non-PG material. 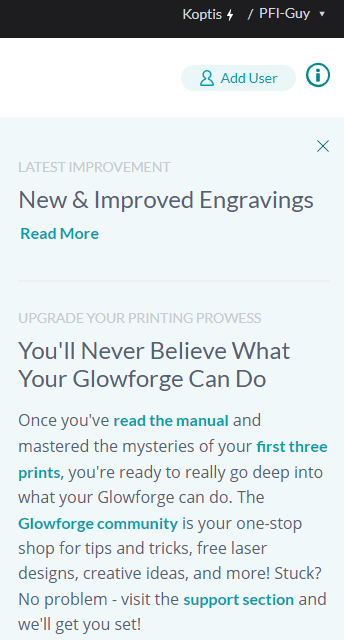 The changes are not silent. Beyond the forums, it is in the app interface and at New & Improved Engraving under Latest Improvements

Thank you Joe. I went in and checked each setting, and saved them. That will certainly help!

it defaults to “SD Etch”

Yeah, I was saying the same thing yesterday. I think it should default to the highest quality, not the fastest speed. Seems counter-intuitive to favor speed over quality.

I don’t think this change was silent at all. Like @PFI-Guy said, they are posted in the app as well. 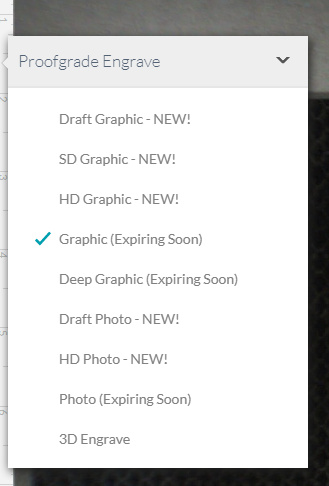 I’d like to think there’s a happy medium. The changes aren’t silent, but they do get changed without our consent… I think this is the second time since I’ve had my machine that PG settings have been revised. I can see how this will come to irritate people over time – the Glowforge is a tool, and people generally want their tools to work in a predictable, repeatable way. The manufacturer doesn’t sneak into your garage at night and change the blade on your mitre saw. Even if they leave a post-it note, this behavior may be unwanted.

I don’t personally care all that much, but I acknowledge that complaints about this are legitimate and Glowforge should consider finding a better way to implement these changes in the future. Perhaps if they’re planning any big revisions to the UI, it could include thinking about alternate ways to have a library of saved settings, or a facility to opt-in to changes on the user’s schedule.

Just to give an example of how this could be a problem: I made some prototypes of a trophy and sent them to my “client” for review. Between the time I made them and when I get the sign-off and start production, I wouldn’t want the settings to change out from under me. Especially if the old ones are deleted after “a week or two”. I might be away for the holidays and come back to find them gone. We can talk about workarounds, keeping a log book with copies of the manual settings, etc., but this is a machine that’s intended to be used by thousands of people of varying technical ability and who don’t all participate in this forum. When I worked on frontend stuff, we talked about the Principle of Least Astonishment and tried to design things in a way that would minimize the amount of surprise and alarm we caused our users. I think there’s room for improvement along this axis.

Fantastic explanation, and I totally agree. A saved custom settings option would be a brilliant idea.

we talked about the Principle of Least Astonishment

I ignore this 99.9% of the time, so much so that when I think about it, I hit the X the other day to close it for the first time and have no idea if it actually came back, or if it just reloads every time we log out and back in. Maybe if the letters were a little more bold and stood out more, but I think I would still ignore it as I’m only on that screen uploading stuff

For both sides of the argument: When you’re in such a hurry (such as now during the holiday season), it’s a lot more likely that what you’re used to will be the default set of operations. So if I’m currently used to dropping some acrylic in my machine with the old engrave settings being the default selection chosen by the camera, expecting that to continue to be the case, then I would be quite shocked to pull my print out after an update that I missed reading about.

On the other hand, as you and a couple of others have mentioned, there are places to see that there has been a change. All it takes is clicking on the dropdown menu for any of the layers, checking the forum to see if there have been updates, or even the sidebar on the main menu of the app, but this all requires our comfortable habits of being able to just drop and go to change. Really it’s just adding one more step to our process, but it can be a pain if you’re not expecting it, so I sympathize with @MichaelKoske on this.

I think a simpler solution (a bit more aggressive) would be as @Scott.Burns mentioned, with a quick pop-up when opening the app page that just notifies you of any possible new changes. It would be quick, they would be covering themselves, and people would complain less (there will always be complainers).

At the end of the day, we have to remember that we’re in beta mode here, which is what makes it so that updates rolling out periodically is to be expected. In a year or more these sorts of things may be handled better, and who knows, maybe some of our suggestions become implemented and the future generation of gforge owners benefit from us, so that’s a win. We all accepted the email knowing that this wasn’t going to be 100% what the company will always offer, so give them time and keep posting about what you do and don’t like and it’ll be fixed eventually

Furthermore, if you’ve not done any forging for a while, that announcement might already have scrolled off the bottom!

… if you’ve not done any forging for a while, that announcement might already have scrolled off the bottom!

So notification in both the forum and UI isn’t enough?

The scrolling notification list on the side of the UI is not really a solution. If it’s been a while since you’ve done any forging, it is possible that the message will have scrolled off the page. And I imagine @raymondking32 isn’t the only one who tends to ignore it altogether:

I ignore this 99.9% of the time, so much so that when I think about it, I hit the X the other day to close it for the first time and have no idea if it actually came back

Posting the changes on the forum is great for us active users, but I bet there are lots of GF users who don’t visit the forum at all, and some that only come here when they have problems. A very active forum user was apparently bitten by the engraving changes recently, well after the announcement was made on the forum.

So no, I don’t think the two are sufficient. See a previous post of mine above for what I do consider sufficient.

Thanks for the discussion - I’ll pass on the feedback.

Are these all the choices available now? I only display four of these for proof grade engrave