I watched the YouTube video made by tested and @dan talked about the GF being able to auto calibrate a new material to find out the laser parameters. I have an epilog zing and that’s been my main gripe. I have to experiment every time I do something even with old materials I’ve used before because I misplace my cheat sheet a lot. How does this auto calibration really work? Will we be able to save a profile for a new material?

This I’m a bit confused about as well.

I think it’s meant more for recognizing other products like a MacBook, or iPhone, etc… For engraving.

The way I would do it probably is calculate the mass of the material. If the GF would have a scale in it, it could calculate the XYZ to get the volume and with the scale the weight, then through some simple math/physics get an approximate material type.

But this wouldn’t really work because of different reasons. If the material is hollow for example. But it is a nifty feature that could be used in the future.

Of course if this is even a viable method of predicting settings for a material based on its mass, which is not the same as the material type/molecular structure.

My idea about this auto calibration is this. Put a sample of your new material in the GF. The GF will then try to engrave and cut the material with varying speed and power and then, because it has cameras and can actually “see” the results of the test it can calculate and set the parameters specific to the new material.

At the start of a cut, you will need to select your material type from a list, one option of which will be “add new material”

Upon choosing this, you are offered to manually enter parameters (speed and power for cut or engrave), or you can choose auto-calibration. If you use Auto, you get some requisite warning that you should use a scrap piece of material to calibrate with. Then you are given a cut and various engrave depth markers to position on your material. Laser comes in low power and high speed and attempts the lightest engrave, ramping up power and reducing speed until the camera notices a color shift. Repeat onto deeper and deeper engraves leading up to cut.

One auto-calibrate finishes populating the parameters for cut and engrave, you would be prompted to assign a name for the material, and save the configuration to your profile. In the future, this material will now be in your drop-down selection of material type.

With any luck, they’ll store the material parameters in the cloud and allow us to share new material definitions (so only one person has to work out how to “brown but not blacken a sugar cookie”).

Unfortunately, there’s a reason that comment was only in the “back in time” segment and not in our crowdfunding campaign or anywhere else. We worked on the feature and could not get it to work well. We ultimately scrapped the plan and went with the direction we’ll be shipping: precalibrated materials with embedded barcodes for “it just works”, and the ability to test and save material profiles for your own favorite materials.

I’m sorry to hear that, @dan. I was really looking forward to an auto calibration. But I think @jacobturner has a good idea of what can be done.

Can some sort of calibration sequence be made where the GF will test engrave and cut a material and we can then look at the result ourselves and punch in information? For example, GF will try to penetrate a material starting with a low laser power setting in one section of the material and then move up gradually in power and sections of the material. Then at the end we can answer a question such as “At what lowest power level did the laser penetrate the material?” That way we don’t have to adjust settings manually. It can be a material calibration script. If you are familiar with the Robox 3d printer, it has a calibration script where it prints something and we use the output in calibrating the machine.

Probably need to add some sort of a reflectivity test for the laser wavelengths also.

I will be disappointed if no feature is added. Doesn’t have to be as flashy as originally advertised.

The cloud share setting mentioned above would be a good compromise. (plus upvoting the material settings would help crowdsource materials to cut)

Any clarification possible on “the ability to test and save material profiles for your own favorite materials.”?

Does this mean that I can manually enter various speed and power settings, check my results, and then write down what I am comfortable with in the program at the end? Or does it mean I can run a single “Test and save” command and the machine does the work for me?

I highly doubt the second, but it would be nice if at the least there was a pre-programmed “Cut Gradient” or similar feature, saving us the work of:

This is a fair amount of tedium, and I know that I would personally work on designing a single cut template similar to: http://www.thingiverse.com/thing:728579

Or we could have a “test mode” or “chart mode” where it would make a chart like on the image below and we would see what it does on some settings. 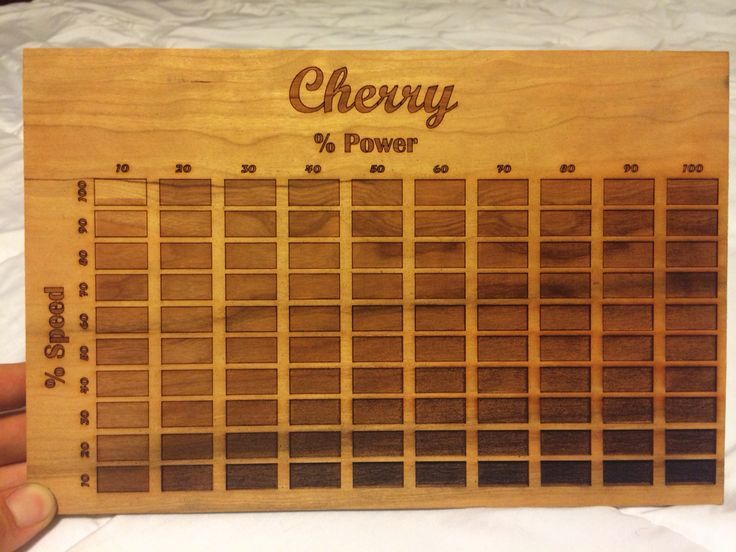 This is for engraving, but we could also make it for cutting.

@briski This is exactly what I would do, awesome example.

Cool! Doing this yourself is really easy, but it’s a good suggestion to provide something for you to make it easier.

This is implemented as a drop-down material picker in the UI. You can save your own settings to it.

There could also be a way for us to put our own bar codes on material, or something else.

I could just generate a bar code or QR code and print them on stickers, and when I come from the store I just pop them on the materials I bought. That way if someone else (like my girlfriend) would be using it, she just pops it in and it loads my settings

Hm! Since this is going to be for my business how about this.

Since cutting things takes a while sometimes and I won’t be around but someone else will. And that the other person is not confused about where in the cutting process I left the shop and which pieces to cut next, we could do the following.

I start a project and have to load and cut 10 plywood planks.I am presented with 10 QR codes that I can print on a normal printer.

I just stick one of each on a piece of plywood and pop them in the GF.

The camera reads it and automatically loads the vectors/paths for cutting or engraving for that particular QR code.

I cut 5 plywood pieces, leave the shop, and whoever is left there to work can just pop the next one in and the GF will know what to cut.

This way we could also plan things in advance.

Or we’re engraving 2 mac books 1 iphone and something else. Print QR codes and stick them on the item. Then load it up in the GF, it loads the settings and image, we remove the sticker and hit print

I’m wondering if there’s a solution here using crowdsourcing? Developing a list of vendors and materials and providing configuration data for other GF users via an online database.

At the least, there will certainly be a forum post tracking such data.

Well… that initially. As soon as the amount of data becomes cumbersome for a forum post, I would hope it transfers to a Wikia or other more readily searched format.

Building the crowdsourcing into the interface directly would be tricky to make it look good. But placing a simple link out to an officially maintained wiki site for manual look-up of material wouldn’t hurt.

given as the data will be passing through the cloud there really isn’t a reason for it to also be stored there. may need some sanitization, but it should be stored and retrievable for other users. otherwise it’s like we’re asking for all the drawbacks of the cloud and refusing to take any benefits.

Two scenarios to consider if you are asking for community designed presets in the cloud:

And proceed on with 2,000 variations of each and every type of material you can think of. Yes… users will ideally find that the settings from someone else’s work are sufficient to their own, but why remember which one of those 100 names was the right one, when you can save a new name you will always remember?

This morning, you run a job on Cherry 1/8" preset. But the engraving comes out as cuts! You check the history and see that someone typo edited it last night to 110 mm/sec and 40% power.

With a manual lookup, and personal storage, you have only the settings you personally use, and only you can ever change them. Yes… when working with a new material you need to stop and look up the numbers to enter. But you are already online (GF works, so we know this), and ideally have a direct link to the source of those lookup tables right there in the interface.

@dan - Ideally I would like to see something in the software like a pre-loaded test pattern that would automatically locate the edge of your test material then ran a sequence of 1/8" squares 1/8" apart down the edge at different pre-determined power and speed settings so that you could then use calipers measure the depth to determine which speed/power combination was most suitable for your project.

I would think that including something like this would be both useful and very close to auto calibration. For a truly automatic setup, the macro camera might be able to go back and scan for depth after the cuts were made to build a “material profile”, but of course that might be outside the limitations of the software and/or the camera.

The automatic part of what you describe is exactly what we tried to do before concluding it wouldn’t work and switching to known-materials instead. : /

Unfortunately there’s no set of “trial cuts” that works for e.g. both tissue paper and 1/4" plywood without making a mess of things.