Glowforge 2.0 needs to be made entirely of this stuff. 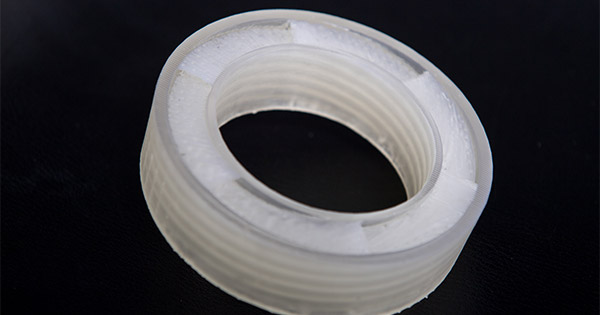 Boston University engineers have created a sound baffle that isn’t a barrier at all, but instead an open conduit that allows air to pass through. Such a feat was only possible by developing a synthetic material with the special ability to cancel...

That would be Incredible! I am curious what the cost would be though. If you could make fan blades with a shape designed to make less noise, it may be workable into a design.

Meh. Not that ground-breaking of an idea IMO. They designed a structure to reflect sound waves with a specific timing shift in order to generate phase cancellation. It’s interesting because it’s completely passive, and because they used a 3D printer to make it. At its heart, though, it’s not a lot different from active noise cancellation (the technique used in headphones and some luxury cars).

The problem is that this particular idea seems a lot like the “invisibility cloaks” that have been in the news of late. Yes, they work. For instance you can get microwaves to flow around an obstacle like it’s not there, like water goes around a stone in a river. But they have to be shaped just right and tuned to a specific frequency and they only work at that frequency. Near as I can tell this acoustic device would have the same limitation. It was tuned for a specific tone. If they played some AC/DC at full blast on that speaker the sound would come out the end of the tube mostly unaffected.

While they speculate about potential applications I don’t see how they’d get there. Especially when active cancellation is cheap and easy, all you really need is a microphone and a speaker and a handful of cheap electronic components.

Obviously, creating a glowforge out of this is a joke… but acoustic performance of a next gen GF would be high on my list.

The applications for this are plentiful, there are lots of areas where it’s not practical or cheap to setup active cancellation. Yes, while this would be tuned to a specific point source of sound, that’s kind of the idea. You could dampen a machine that moves around and not have to spring for (yes) expensive active systems for every listener.

I’m no acoustic engineer but I do understand wave interference and destructive resonance, and it sounds like you do too, so I’m sure you understand that the limits of active systems are about where the listener is (step out of the very carefully controlled dead zone, and you’re out of luck). This is about where the emitter is and has no moving parts, fragile electronics, or power draw, and it definitely is a lot less meh than you’re making it out to be. Speaking from my experience with adding insulated duct to my GF and the massive sound dampening that came with it, I’d say an acoustic dampener on the outflow would be great (although probably not practical, as it’d get gummed up with residue pretty quickly and lose its mojo).

All that is to say yeah, seriously, get some insulated duct and thank me later