I used your proof grade acrylic and your HD settings. There is no image on the acrylic after engraving it. What am I doing wrong. I have tried different materials and different settings and have not engraved one thing that is usable. 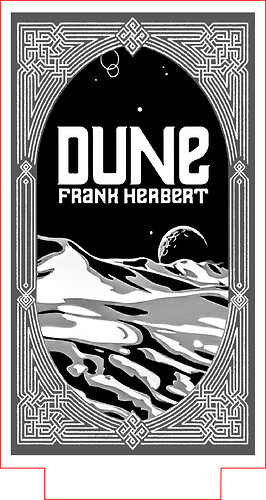 Can you post a screenshot of your GFUI showing everything from your material selection on the left to the name of your machine on the right?

Also, what is the graphic format for the image? When I was trying to engrave a graphic one day, the head moved, but there was no fire. If I scored or cut instead, it was perfect. Engraving was the problem.

In my case, I had a vector file that had two or more hidden elements behind complex shapes. When joining or trimming some objects, I did not get rid of the invisible duplicates.

I’ve turned it off hours ago. It’s a Glowforge Pro and I used the Proof Grade Medium Acrylic. I started with a .svg file.

I started with a .svg file. I know the laser was firing because the paper was browned and I checked my computer for the settings. I burned the file earlier today using different settings and I could see it in the acrylic but it was too dark so I used the Glowforge setting andthere was nothing there.

Several of the “HD” settings are useless. It’s been documented for years and changes have been requested here but they refuse to correct them. The power settings are so low it barely burns thru the masking. You can remove the masking first but that often comes with its own issues, Some of the wood settings barely show an image even without masking.

Reinforces that you should always test on scrap before committing to a large piece.

For a design like that, I would make the image a raster, invert the colors so white was black etcetera, and mirror it so the text was backwards and then use the 3d engrave setting on a transparent yellow acrylic. As almost everything is to be engraved it would not hurt to remove the top masking first as all that will not leave much masking anyway.

Afterwards when you flip the piece over the design will appear through the material, and if you are using those night lite things, might give you a much more stunning effect.

A jpeg is pretty dirty but this is what your cut should look like…
Dunebook.zip (513.7 KB)

I don’t agree that the HD settings are useless and that “they” have refused to correct them for years. Testing is always necessary, but the point of Proofgrade material and Proofgrade settings is that it works or the material will be replaced by Glowforge.

Since you have been here for years, perhaps you would share a specific HD setting that is useless so others can document your theory.

This topic has been discussed frequently, but it seems like nothing has ever been done to address it. In simplest terms, HD photo settings for PG materials do not produce useful results, and owners without experience assume their machines are broken. Here is the sample image from Glowforge photo editing tutorials, labeled as “This photo would engrave very well on the Glowforge.” [image] I just printed that image printed on PG Med Draftboard using PG settings, with and without masking. Note …

That was not the first time it had been brought up, and there was active discussion at the time by new users who could not get good results using them.

I used the HD setting for Medium Clear Acrylic & there was no image burned to the acrylic.

Seems to me this is an example of those settings being useless. The cut worked, the engrave failed and they were done on the same piece of Proofgrade through the Glowforge UI. Glowforge had complete control, the user did not. The UI could have adjusted or rejected the image, and/or provided feedback to the user, but it did not. I would understand if the results were not quite what the user had in mind, but a complete fail on the engrave equates to ‘useless’ in my book.

How hard would it be for Glowforge to provide human-readable documentation for every run, successful or not? A simple email, or even webpage that showed the image beforehand, each of the burn settings, and an image afterward. Basically a job sheet that provided documentation of the job. That way users could refer back to it to adjust as needed. They would also have the documentation needed to troubleshoot within this community in a standard format, after the machine was shut down or another run attempted. If new users fail to progress to experienced users and abandon the product, the company/community fails too.

I tested other materials with HD settings and had similar results. They closed the thread before I could record those results. I have them somewhere.

Here’s the image provided by the OP loaded directly into the GFUI, engraved with HD photo (left) and Draft photo (right).

Yeah… HD isn’t useless at all… In fact, the detail is so incredible, neither my eyes nor my camera are worthy of seeing it. 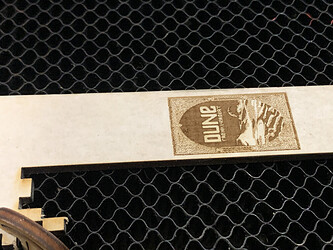 I see you also chatted us as well, I’ll close that request so the conversation can continue here.

I’ve spent some time reviewing your most recent print attempts from to better understand the circumstances around the trouble.

On your most recent print attempt, it appears the masking of your material came loose during the print. This masking material being raised up could absolutely explain a lighter than normal engrave.

On the print before that, it appears no masking was used. During the duration of the print, the material began to flex which could also contribute to the less than perfect print results.

Additionally, on both attempts it appears manual settings were used with a higher speed and more power than what is traditionally used with Proofgrade material.

In the logs from your recent prints, it appears that the material used wasn’t Proofgrade Material from Glowforge.

For our next steps, could you run this print on Proofgrade Material with Proofgrade settings and let us know how it goes?

I’ve seen lots of good work done with HD settings, and have utilized it in the past with no issues.

I would probably open a support ticket if I were you. Your tube could be having trouble firing at the lower power levels of the HD setting, or not modulating power correctly. Could be having a focus issue — at very low power levels and out of focus, it could just be no energy really impacting the material for a burn. Etc.