My lid camera leds do not seem to be working. I’ve mostly been loading designs from the computer, and not using the trace, so I had thought the lens was getting smoky, no big deal. I wipe it off, no change, inspect again, no luck, then I remember back, long ago, when it would flash at some point to take the bed image. I’ve been looking for it, and no luck. The image attached is a sharpie drawing on cardboard in the center of the bed. Understandably, the software was not able to recognize enough contrast to cut out the design. Are there any troubleshooting steps for this? 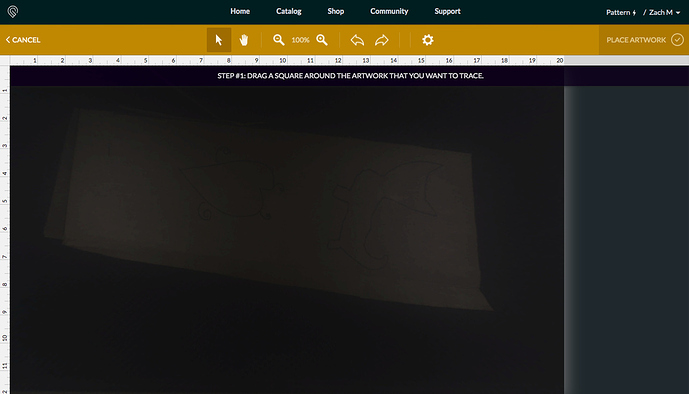 I guess it is most likely due to the ribbon cable breaking where it crosses the hinge. You could look for the break but repairing it would be difficult and I doubt it is easy to replace.

If you can access the connectors at each end you could check they are seated properly.

No obvious breaks. It looks like it’s the same cable that feeds the side lights under the lid, as well as the camera, and they are all working, so if there’s a break, it’s a strand within the ribbon, I’d guess, but impossible to see. Seatings look good, but I’m not sure if I can test to see exactly how well all of the connections are working.

I noticed my machine camera no longer flashes twice after a job like it used to. I assumed it was due to an update.
No one else?

I noticed my machine camera no longer flashes twice after a job like it used to.

I happened to watch my startup sequence the other day and I noticed that I didn’t see a flash when it was calibrating. Still not convinced I didn’t just miss it. But the fact that I actually noticed the lack of flash makes me think my mind wasn’t playing tricks on me, but I wouldn’t rule it out.

It would explain peoples endless calibration if it has started to do it without lights. If your room is dark it would never find the head.

If your room is dark it would never find the head.

Well, the side LEDs do still keep it pretty darn bright in there. But it’s certainly a working theory!
Man, I wonder if that’s why I spent half an hour calibrating the other night. I almost never turn on the lights in the Glowforge room at night because the LEDs light up the whole room. Not sure if I ended up turning on the lights out of frustration and that’s when it started working or not.

place a cover on the lid while it’s calibrating, to block all light, and see if it ever finishes?

I’ve also noticed that I don’t get a flash anymore.

Hey here’s a question… Do ya think somebody at

screwed up and switched signals so that instead of flashing the camera after a job, the air assist blows? And maybe that’s why that happens now?

Obviously.
The Business requirement was “I want a clean picture from now on!”
IT did as requested!

Thank you for reaching out about this.