Thanks, Rita, please let me know ASAP as I am stuck not being able to use the Glowforge at the moment

Sorry to hear about your HOA problems. I love living in the country where people generally help each other and don’t bother you unless there is a big problem. I hope you are able to find a solution that works for you and the HOA.

This is very subjective. I would have a lawyer take a look at it, I don’t think it is enforceable by law. Measure how loud it is vacuuming from outside your apartment, then measure how loud the Glowforge is. If they are comparable, then you are good.

That being said, one thing you could do is run for a position on the Board.

Section 4 - Offensive Activity. No noxious of offensive activity shall be carried on upon the Project, nor shall anything be done thereon which might be or become an annoyance or nuisance to occupants within the Project,

So basically this defines what they are doing to you.

That said. In all reality, I do not remember many instances of people winning against these self proclaimed tyrants.

There is a reason why we moved to a non HOA area. No more “you have 2 grass stalks longer than 4” on your lawn" type letters.
Funny thing is, first week we were in the new place, got a letter from the county to please cut the weeds along the road (had been gone for 8 months and the tumble weeds were a bit large). Which reminds me… Gotta torch last years remnants…

Someone made a noise baffle ages ago, I wonder if something like that would help?

Ah, there we go, @takitus was the one who posted.

I think the idea was to reduce sound inside, but maybe some sort of baffle post-exhaust would do the trick, if you could do it without impinging airflow too much?

Just build a muffler. Wide spot in the pipe followed by an outlet back to the original diameter. Just like your car muffler. You could get fancy with internals, but try a plain one first.

Also, file a complaint every time you hear anything from your neighbor’s unit. See if they like the treatment.

That’s exactly what I was thinking. You could even make one on the Glowforge. Just need a baffled box between the GF outlet and the window outlet. That should kill most of the noise and especially the high frequencies.

You willing to share some photos of your set up? I’m not quite picturing it.

Hey I just put this on today and my sound went from about 80 decibels to almost zero. I haven’t measured but all you here is a little wind like a dry’s vent with just the air coming out so I din’t measure it. I had a more solid tube I tried and it was 100 decibels. I hope this will work okay I think it’s meant for grow tents. It has tiny holes inside so I am sure it will get fill up with dust. So have to keep an eye on it and see. 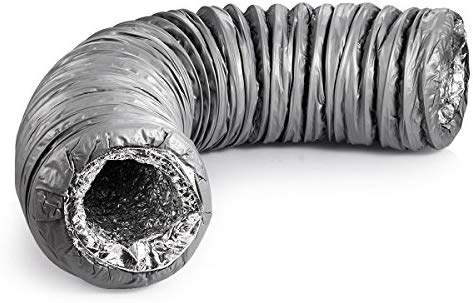 Anybody see an issue with using this?

Rent a jackhammer from a hardware store and use it for several hours on both Saturday and Sunday. Then when you stop and turn on the GF it won’t seem so loud.

i’m not sure what you’re asking. doesn’t this go over the top of an existing hose or is this the hose itself?

if it slides over the hose, it should be fine. if you were to use this as an actual hose, those holes would create a lot of odor and probably some smoke as well.

I have been using this and seems fine no noise outside now where it was almost 80 decibels. Also I have no odor now

Technically the GF does not create anything except smoke. It only subtracts small amounts of matter where the laser vaporizes the target.