Definitely not something you want to let slip and swing past your leg.

This is an interesting illustration of unexpected externalities… car seats as contraception: people having fewer kids because of car seat regulations.

Since 1977, U.S. states have passed laws steadily raising the age for which a child must ride in a car safety seat. These laws significantly raise the cost of h

Ha. That is interesting. I used this fact in a homily one time. My clan is pretty idealistic about reproduction. Pragmatism blows idealist values away.

Still on my woodworking kick, this guy is my new internet love, Pask Makes. In this video, he makes his own plane (one of a series) in a variety of wood. I think his planes are a work of art.

I would love to learn the art of planing wood. Imagine engrave/scoring a design onto a 1" x 12" piece of wood and then planing it off as veneer already cut to size (is this even practical?). Since I don’t know any better, it just seems cool to me.

Note: I turn my sound off while the intro plays. It clashes with my tinnitus.

Related to the creative AI (Midjourney, etc.) stuff above:

Over the last few weeks we all have been overwhelmed by the response and have been working hard to ensure a safe and ethical release, incorporating data from our beta model tests and community for the developers to act on.

TL;DR: there is now an open source variant you can download and run on your own hardware (or cloud systems). Notably, there is no content filtering on this, unlike everything publicly available so far.

If you are playing with this stuff, I encourage you to also spend a little time looking into the possible ethical and social implications of this technology. I am not asserting an opinion of it but, suggesting it is big enough to merit a little reflection.

This post from an AI researcher touches on some of that:

r/MachineLearning - [D] The current and future state of AI/ML is shockingly...

So I’ve been in the SD beta for a while, and they do have content rules, though the filters aren’t based on keywords like MJ. Instead, they algorithmically look for violations and blur images that run afoul of the “no adult content” rules.

That may be changing as they migrate toward running on local hardware and local storage for web-based queries (all images are stored locally in browser cache), but as of now I think the rules are still in place in their TOS?

That being said SD isn’t bad. I think I prefer MJ’s aesthetic, but that’s subjective.

I checked SD’s rules posting in their discord channel:

I am not sure if the policies changed once they moved off discord, lets look at the webpage and see if it has rules regarding content. Ah, it does:

DreamStudio and the Stable Diffusion should not be used for:

-Copyrighted or trademarked material should be avoided in prompts.

There we have it.

In this video, he makes his own plane

I find it interesting that he uses his hand plane to do so and a fancy power plane for wood prep. Kinda like using cad and a 3D printer to make some drafting tools.

I suspect a band saw could cut 3/4 of the thickness or a bit more off and those power planers doing much of the rest of the job, but using a hand plane to make a large area of wood evenly flat, or even sandpaper would be hard even as a zen exercise.

this is a very cool guitar build. 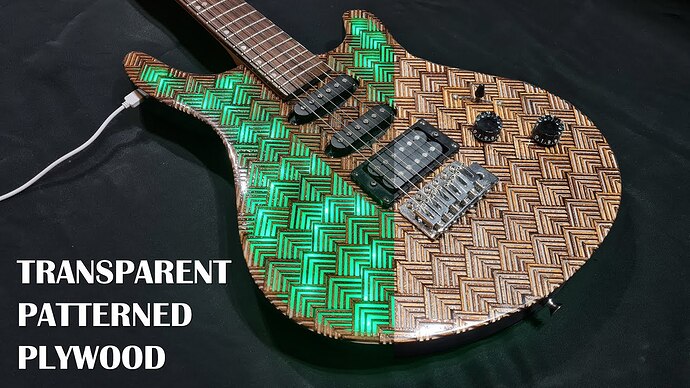 We've seen a lot of cool custom guitar builds over the years, but we're particularly enchanted by this one. Woodworker Ray Whitby created this beautiful

New drone dropped from DJI, represents a sort of new direction for their design – small, compact, tough, FPV-focused, no gimbal, fewer sensors, lower flight time/higher agility. They’re saying it’s safer to fly and can go into tighter spaces because it’s so much smaller. 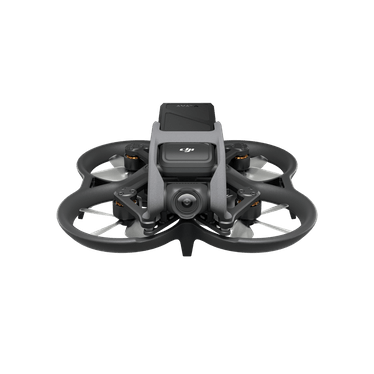 The coanda effect on ducted fans usually puts a pretty low upper limit on forward flight, yet they got it up to 60 mph max. Kind of impressive. I’m not sure who the target market is, but it’s cool and interesting tech.

No way. I have a DJI Phantom 3 Pro and now I feel like an old man carrying around that backpack.

I’m not sure who the target market is, but it’s cool and interesting tech.

I think it makes FPV flight easier to master for the new flier. It also looks like it’ll be outstanding for real estate interior tours.

I’m not thrilled about the SD/USB slot/connector. It’s blocked by the prop blades. Fat fingered folks like me will be fumbling & cursing every time we try to pull the video off the bird.

I’m in the fence trying to decide if they might fix it in a fast-follow v2.

I have one of those (well a P4 Pro) and only fly it once or twice a year. The Mavics are much more grab & go.

But if you want big, the Inspire is in a huge case. And I have to bring a folding table with it because they really don’t like dirt takeoffs.

now I feel like an old man carrying around that backpack. 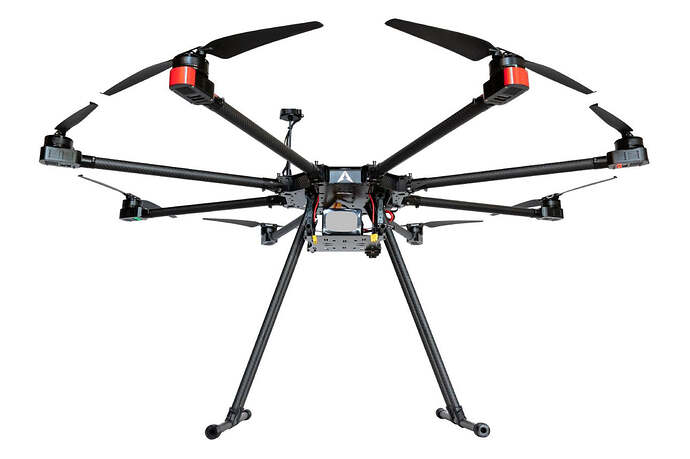 The drone I linked back in May, the Agras T30, (DJI Agras T30-A New Digital Flagship for Agriculture) carries 30 liters of liquid, which equates to about 66 lbs, and it has a flight time of about 8 mins at full load, 20.5mins at half payload. The tech changes so quickly.

Then there’s this sort of thing:

I don’t think that counts as a drone (unmanned aerial vehicle). It may be remote piloted, but once that guy climbed into the cockpit it stopped being a drone. It’s in the same class as spacecraft that are run from the ground with people aboard.

the same class as spacecraft that are run from the ground with people aboard.

it has a whiny voice

Hmmm, what else has a Whitney voice?

I’m not a horse person, so the entire world of horse care is mysterious to me. Youtube said “hey, want to watch some videos about horse hoof restoration?” and of course I said yes. In this video, a horse needs some serious hoof maintenance. I’ll include it as an URL, not a thumbnail, because the “before” picture is a little rough and might make animal lovers a bit sad. Spoiler alert: it has a happy ending!

Horses can be like dogs. One of my daughter’s would come running across the pasture if I went out to fetch him into the barn. Didn’t even need to put his halter on, and he would walk with his head on my shoulder, and “muzzle” me at shows.

This was her first - both of hers were former race horses (thoroughbreds), but this one won Belmont. I’ve ridden all kinds of horses but you can just feel the power of these racehorses underneath you. Her second one got spooked while she was jumping in the main arena at the GA olympic and took off at full speed, her mom and I just about had a heart attack. She could have been killed as it tried to run up the sides of the stadium then exit. Fortunately several trainers were there and they all managed to get him to stop. 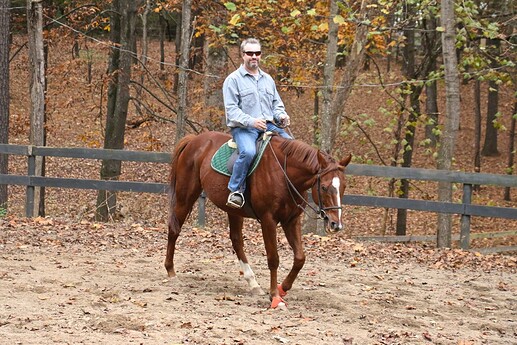 Daughter looked a lot better on them than me… 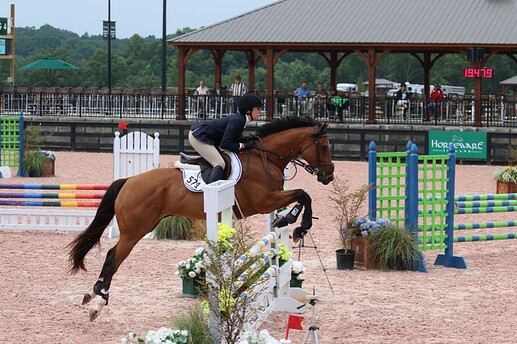 my mom rode morgans on and off, going back to her first horse in the early 50s. when she got back into riding in the mid-80s, i got to learn as well. she went from showing (which is what she did as a kid) to endurance riding as a woman in her late 40s and her 50s. 75-100 mile rides, sometimes through some fairly rough trails.

me, i just liked getting up and loosening the reins and seeing how fast they’d go. which her first horse as an adult loved. if i wanted to trot, i had to rein him in the whole time. if i loosened up, he’d immediately go to at least a half canter. and he couldn’t stand not being the first horse in any group.

her last horse used to wait for her to bend over and then would run up and goose her. they definitely have very unique personalities.

Hah, the algorithm feeds these to me occasionally as well, very interesting topic.

Why don’t wild horses need regular hoof care? Because they’re bred that way. Domestic horses are selected for other traits, and crazy hoof growth doesn’t matter with humans around to compensate.