Not a problem you have to fix…this is some well deserved feedback.

I was taking a stab at my first major passthrough project - there are multiple lines that have to meet up exactly or it isn’t going to work, and the sizing also has to be exact within a mm.

I spent a heck of a lot of time coming up with a method to get things to align, set it up and started processing the interior cuts. Everything was running along perfectly - until one of those sudden Texas thunderstorms popped up.

Nothing more panic inducing - the likelihood of power failure runs about 80% and I’d only gotten the first and half of the second of the triple pass cut. So I rushed the third cut and didn’t align the last one quite right. It was off by a mm. I decided I could shift the material just a hair and recut it, I set it up, sent the job to print…and the power cut out the first time.

I don’t know how many times it switched on and off over the next ten minutes or so - I’d gone out to the garage to check on some things, but eventually it settled down long enough for me to actually queue up the print and run it. It worked. Just as the fan was doing it’s final blow out, we lost power again.

Holy moly that was some spectacular engineering! I thought the print was toast. My hat’s off to you guys…big thank you to the engineering team.

The documentation says not to use a UPS but I’ve been in IT for 30 years. I don’t see a reason not to - if it’s a good quality one. The FAQ says that the unit uses about 800 wats (like a PC or computer server) when running - there are several good UPS that can run that for ~5 minutes… I think that would help the machine so it does not “drop power” before a cooling cycle…

Man, what is the deal with the weather around here? I’m trying to run another part - another freaking storm starts rumbling in the distance.

On the other hand…Can you spot the join? 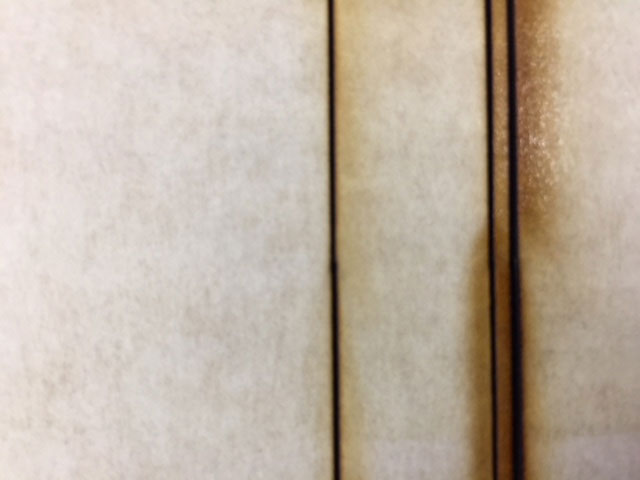 I did the math… a 1500 VA will run 800 watts for ~5 minutes. And protect from surges and line voltage bumps. So we ordered one today. Weather in GA is pretty unpredictable too. Cheap insurance for a 3k toy…

We went a little overboard…I run my computer on an Opti-UPS with a Zero Surge behind it, and a whole house Generac behind that. (My computer is actually significantly more expensive than the Glowie - losing that would be kind of bad from a business standpoint, so short of a direct nuclear strike or house burning down, I’ve got it covered.)

All we use on the Glowforge is an outlet extender. It’s on a dedicated circuit. It might have some surge protection in it, but I’m not sure.

Anyway, it held up to a lot of switching the other day without missing a beat. And strangely enough, we had a power drop while I was typing this up…the fun never ends.

The suggestion to use UPS is to avoid the lag where the power is out and the generac is kicking in.
I do want to get a generator for the house…

So far, we’re down to about 2500$/per outage. (Hubs joked that the day we installed it would be the last power failure in the neighborhood. He wasn’t far off.)

so short of a direct nuclear strike or house burning down, I’ve got it covered

You forgot floods. You even came close recently no? The Houston floods covered more square miles than there are in CT.

Thank you for sharing that story, Jules. I’ve passed that along to the team so they can hear your kind words as well!