Ok, why did i put this off so long? (external exhaust)

You just go to the Gloforge interface and click the dropdown menu with the three vertical dots, and select “Glowforge filter attached” this will disable the internal fan and let you utilize the externally attached fan. Yep, you just add it to the back of the Glowforge. Do a search in the forum for inline fan, or Vivosun. A bunch of folks have posted pics.

Can i still run it out Window or do i need the Filter set up to make it most quiet. you mentioned the 8 inch being the best , Thank you

You should definitely vent out of the window, as the inline fan does not filter any particulates. I haven’t tried the 8” fan. The 6” is very, very quiet when compared to the internal fan and the 4” Vivosun.

A 4” duct is capable of flowing nearly 400 CFM before it maxes out. Using reducers to go into the fan isn’t an issue. Pretty sure Boyle’s law comes into play here also at some point.

I agree, but I’m talking about the other side, using a reducer between the 6” fan and the 4” hole in the outside wall. Any ideas of how to enlarge the hole to 6”?

Any ideas of how to enlarge the hole to 6”?

if it’s in your wall (or whatever you have in your window), that would really depend on what you’re willing/able to do. For me, i’d just have to cut a 6" hold in the board in my window instead of the 4" one i made originally.

if you mean in the GF itself, i don’t think that’s going to happen.

I thought that is where I shared the design for my 4-6" adapter but don’t see it, so here’s the file. 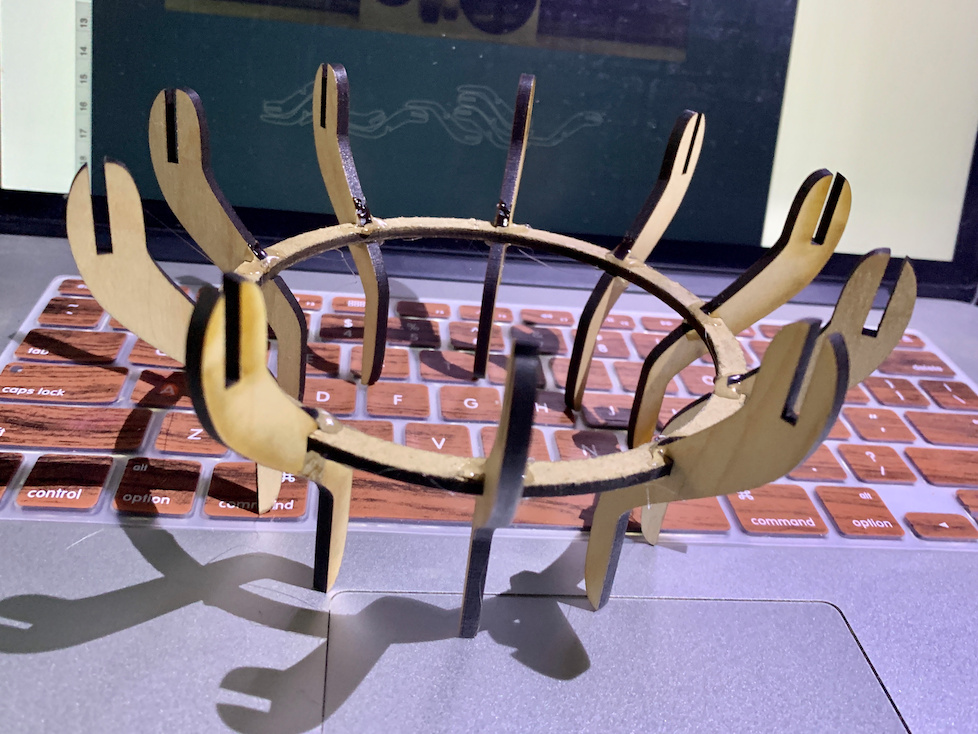 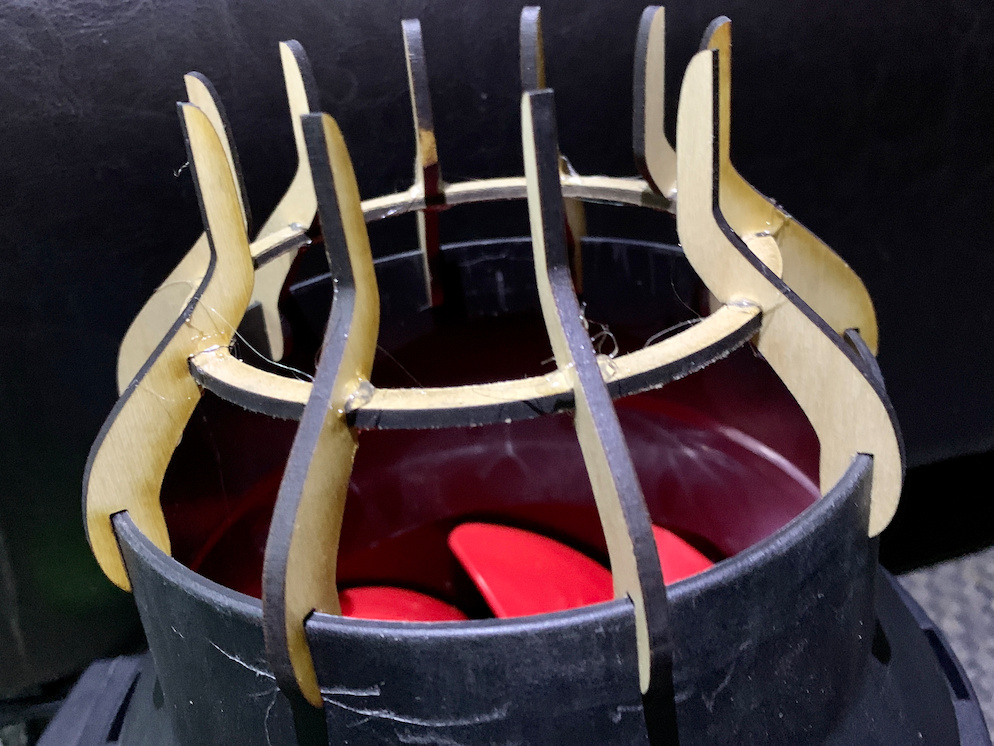 I’m in the same boat and I’m not willing to recut for a larger vent in my wall. I would love to do the 6" exhaust. I have heard people reducing the output but it feels counter productive.

I have two of these, this one connected to the machine with a 5’ flex and one at the end of the nearly 40’ run of 4" standard galvanized vent pipe with a couple of 90’s and a couple of 45’s, all joints sealed with caulk. The impeller in them is about 8" in diameter with 4" connections. Exhaust fan and grill are removed. It evacuates at least as well as the original fan, and there is zero odor from cutting, so I don’t think a 6" hole is necessary. 4 1/2" roll of painters tape for scale. 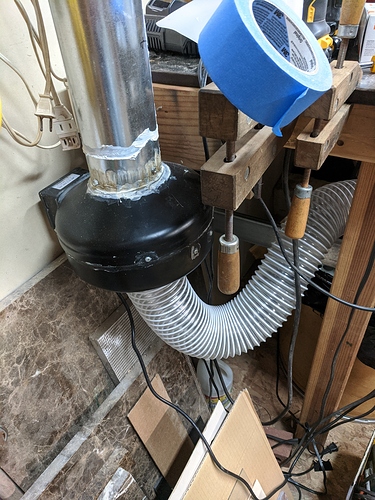 The hole is in the wall. The issue is I already have a 4 inch exhaust vent in the wall, I don’t really want to cut another 6 inch one right next to it, and I can’t figure out how to make the 4 inch hole bigger.

There seem to be a few people who are happy with the 4 inch fan. I have a very short run, and since my vent to the outside is 4 inches, I think I’ll just buy the 4 inch fan and give it a try.

I have heard people reducing the output but it feels counter productive.

I did… The larger fan most definitely moves more air despite the reduction. My smoke gets cleared quickly and the larger fan is only slightly louder. I may move my unit, and at the new location I would go ahead and create a larger output. 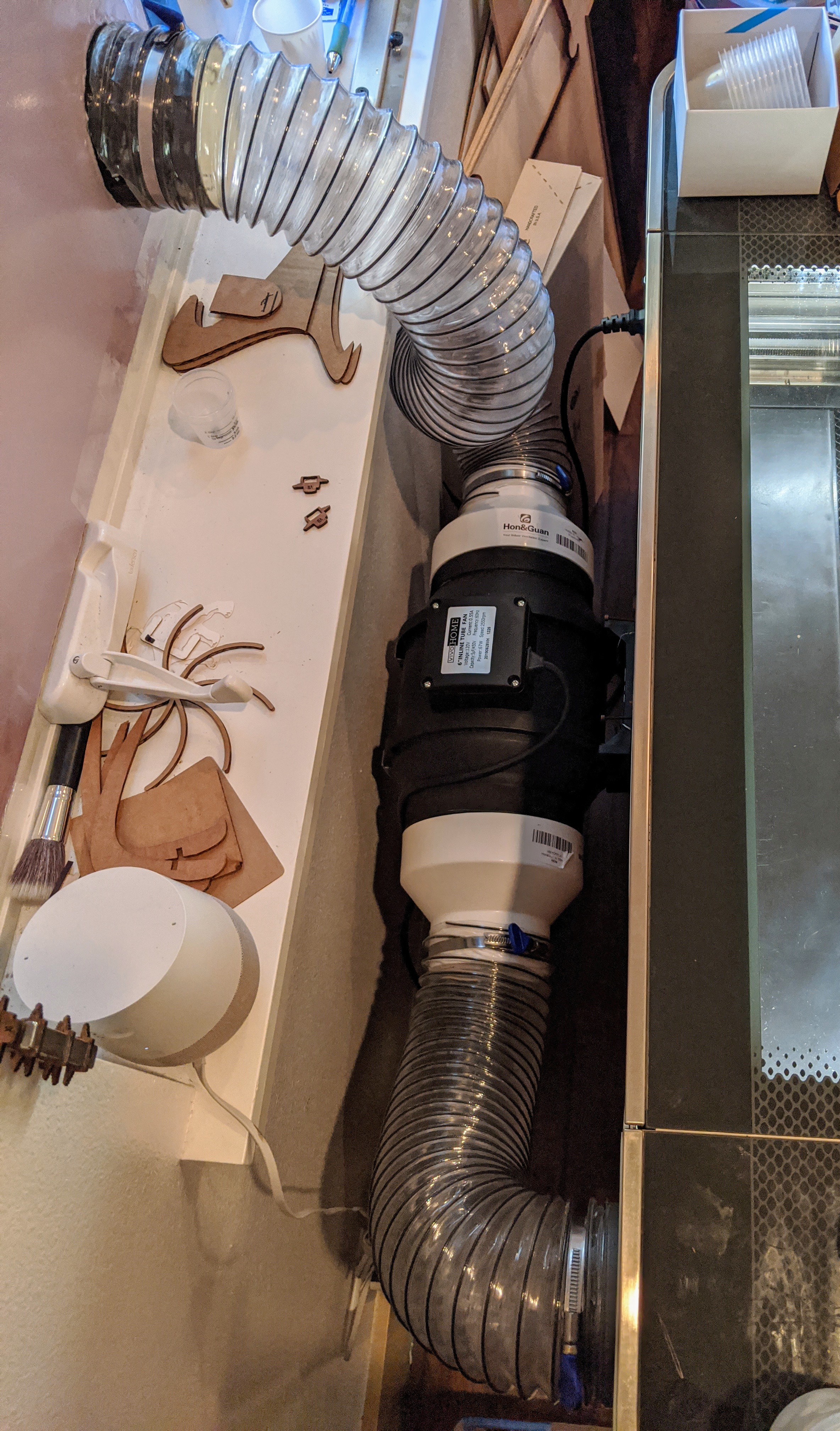 The 6" fan reduced back down to 4" is still going to be significantly better than the 4" fan.

Indeed, the 4" was making my glass get dirty very quickly

I don’t clean my machine much, but I noticed dust “fuzz” starting to “grow” on the coolant tube. Without touching it, it vanished a few “uses” after switching to the 6" fan.

Any ideas of how to enlarge the hole to 6”?

Here’s the universal running now with this exact set up, which is a significantly larger cabinet volume and greater exhaust requirements than the Glowforge. 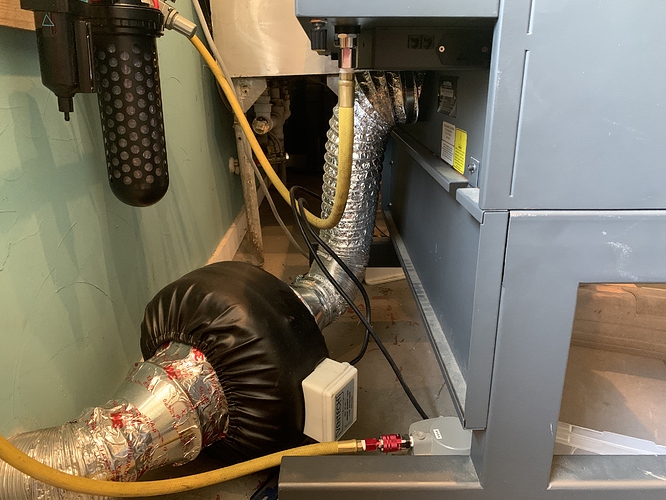 What are people doing about negative air pressure? All houses and apartments have bathroom exhaust (if they are up to code) and then there’s often dryer and range exhaust, and now we have GF exhaust. Tack on an inline booster of 4" or 6" and now we have considerable negative air pressure just from the GF. All that air we are exhausting has to come from somewhere and if we have a tight house envelope even a 6" fan will eventually struggle to get air out.

All that negative air pressure sucks air into the house though all the same ducts - the dryer, the bath fans and the GF - potentially bringing in pollen, the fumes we just exhausted out, and condensation on our valuable electronics. When the dryer or bath exhaust is on and the GF is not, the intake air runs through the GF (assuming it is still hooked up to the vent). Some of that air comes up through crawlspaces or basements which is a source of radon. If we open a window in the same room as the exhaust we risk fumes coming back in. Open one across the house and we now have unconditioned air of 10~20 degrees different temp than the indoor air.

I was looking into an Energy Recovery Ventilator but those things are expensive. For now I have a window fan in a room down the hall from the GF and that works but makes the AC work harder and on some days fills the house with pollen or humidity. It does completely eliminate back-flow into the print room when the GF fan turns off, though.

So I’m curious as to what people are doing with respect to replenishing the indoor air to maintain neural or positive pressure - especially in the case of a high CFM fan on the GF. Anything?

No. It’s a non-issue for me, as the fan is only operated while I’m using the machine.

Thank You for the feedback. I’ve wanted to do this for a while and I think I may just pull the trigger.

I think I am going to do it with the 4" hole but If I were to enlarge the hole I think I would either try to make a circular blank to the size of the 4" hole so I would have center point for the pilot drill on a 6" hole saw or nail a piece of plywood to cover the 4" hole and create a guide for a 6" hole saw. Might still be sketchy though.