Okay, getting mad, "Cooling Down"

This is the second or third time this has happened and cant seem to find a “fix” for it. I was working on a very large, very EXPENSIVE project last night for a customer. This project was on a very expensive piece of Cedar, that has become rather hard to find, and it stopped about half way to “Cool Down” it then continued to “Cool Down” for OVER 5 HOURS!!!(I feel asleep waiting, which I never do but this project was supposed to be done today). This is NOT the first time it has happened and I am a little upset today to say the least. I keep my machine very clean (as clean as it can be considering the majority of what i work with is natural wood). I have been forced to stop the job now putting me out of a very nice and very large piece of natural cedar, did I say EXPENSIVE! I have had a few problems here and there but nothing that could not be easily fixed, but this time is ridiculous.
I have a fan that blows on the machine when it is in use, I leave the lid open when I am between projects to cool it down, the room I have my machine in is actually one of the coolest rooms in the house, I don’t understand. Like I said above, this isn’t the first time this has happened, the last time it was supposed to be a 30 min print and it took it over 3 hours to print with the constant stopping and going, I finally scraped that one, but this one has me angry because of the materials I was using. I am out about $50 just on that one piece of wood and now I am going to have to have another one and I can not charge my customer twice just because the machine messed up the first one, if it was my design error then it would be my own fault, but it wasn’t.
I have go through the trouble shooting steps and have seen other people having problems with it and I would very much like to know why it is doing this. Yes I have checked the fans, yes they are clear, (speaking of, the fan on the bottom of the head gets clogged a ridiculous amount and I see that as a design flaw).
All of that being said, I do love my machine and I am still amazed to watch it work when it is working properly, I am just voicing my frustration on a very expensive machine that shouldn’t have this many problems. I hope someone can help and I can get this issue resolved.
Thanks in advance.

So it will help support and maybe your fellow owners out a bunch if instead of coolest room, you provide actual temperatures and your glowforge model plus/pro/basic as all these things can effect the temperatures allowed.

Do you have the Pro model? (Those are internally cooled, so you can run them for longer without having it pause.)

If not, you need to cool the environment as much as you can to keep the machine within the operating temperature range. The machine can heat up over 12 degrees hotter than the room temperature during long jobs, so you really need to keep the room at least 7 degrees under the upper range limit.

Also make sure you are using as short and straight a run of exhaust hose as you can.

And finally, my favorite solution…break up the design into smaller chunks if you can…process one part, then let the machine cool off for a while.

I am using the Pro, so it shouldn’t be having this problem like it is. The exhaust hose is as short and straight as it can be (I have the filter) a design like I have would be very difficult to break into sections, it’s mostly one big piece but I will try that on the next try. It’s just very frustrating because I got the pro partly for that reason and payed a good bit more for it.

I have been hearing that the filter can “fill” with particulate quite quickly… It might be the problem.

Yeah, I agree with @gewubs, unfortunately the filter might be getting clogged and reducing air flow. That would definitely make it too warm in the machine.

Do you have a way you can vent it outside?

(If you start to smell it while running the filter, or smoke starts to seep out of the cracks on the front of the machine, the filter has gotten clogged and you’ll need a replacement cartridge for it.)

I know it might be obvious, but fans don’t change the air temperature, they just blow it around. Sure, there may be some cooling via convection, but in your case that seems like it’s not enough.

one of the coolest rooms in the house

In my last house I had a small A/C unit in that room just for that reason. On very hot summer days it could get too hot in that room. Turning on that little unit a few minutes before cutting and I never got the unit too hot again. My new house I keep the 'forge in the basement where it’s very cool all year 'round.

Maybe check the cooling fins on your heat sink? Might need to be cleaned.

I live in high temps year round, so the best thing I could do was buy a portable AC specifically for the room the GF sits in. I also have a thermometer to let me know the ambient temp. With that said, the room has been in the 90s, but my Basic GF hasn’t had to cool down for a while, but I’d suspect that’s because the AC sits almost directly below the intake.

I specifically set my GF up to overhang the table it sits on so that intake will have access to the cool air directly. Believe me, I know the feeling of the cooling down message being frustrating. I used to put a fan directly in the bed of the Glowforge to cool it down, and I wouldn’t be able to cut or engrave anything unless it was early in the morning or late in the evening. 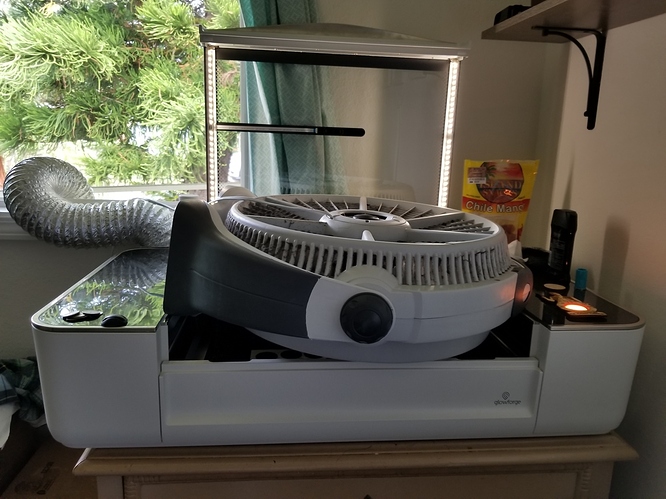 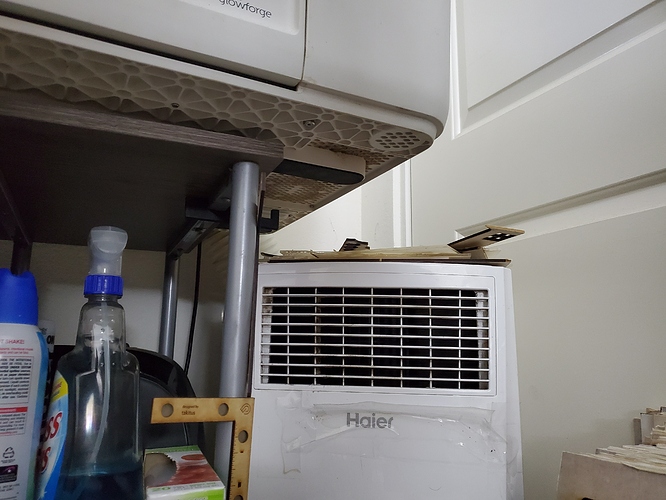 There are a lot of expectations when it comes to this machine, and because of that, disappointment and frustration come up pretty quickly, especially when you see other people’s machines working “flawlessly”. The only way to almost completely get rid of those negative feelings is working around them. If you’re aware your machine is susceptible to needing to cool down, you’re going to have to cool it down better. GF can’t push an update that will fix this, so hopefully you’re able to figure out something that works for you.

Careful opening your lid that wide. Lots of people have issues with that wiring catching on the frame.

I have the filter

The only exhaust for the machine is thru the duct, and in this case, to the filter. You also commented on the air assist fan being dirty. It sounds like you are doing a lot of engraving, and that will clog the filter, which will result in reduced airflow, which - in your case - would reduce the ability for the machine to cool, regardless of how much cooler air you are blowing around the outside of the machine.

In short, check the filter and, if possible, vent outside instead. It’s less than ideal as you chose the filter option for a reason, but it appears to me that could be the cause of your issue.

This was two years ago, been through a couple of machines since then. New one never gets opened passed 45 degrees

I’m so sorry to hear that you’re running into trouble.

I extracted the logs from your Glowforge, and I would like to take a look at a couple of items.

Regarding your Compact Air Filter

Would you mind sending over a photo of the top of the filter cartridge?

Taking a look at your Air Assist Fan

When you have a moment, Could you please do the following:

Once I can review your Compact Filter Cartridge, and the bottom of your Printer Head, I’ll send over the next steps.

So I disconnected the filter and put the hose out the window for the time being and haven’t had any problems (yet) But hopefully that fixes it… I would like to say too that I have had my machine for 3 months and if the filter is already full then i am very disappointed and will NOT be buying another one! I paid an extra $1,000 for the filter and then its $250 for a new one, no sir, not if they last 3 months and then another $250, I’ll just rig something up to go out the window. I have also noticed that the excess smoke that was coming from my filter is gone now, along with the noice of and that makes me happy… Very disappointed in the filter feature and wish I had never gotten it.

As for the air assist fan, got the error again today and again had to clean it (twice).

One person reported a full filter in a week, engraving on MDF-like material (such as draftboard) will fill the filter media (and dirty up the fans and optics) quickly.

I think that’s been a universal experience of the people who have the filter - finding out that the lifespan was measured in weeks not months.

Lots of commentary about why that’s the case, but it doesn’t change the fact that no one suggested that was likely to be the case until after the fact.

It’s not a solution for running in an unventable space all the time - for occasional field use maybe, but replacing $250 filters every month or sooner is not something anyone was expecting.

I’m still on the fence as to whether I’ll take delivery or a refund when my date actually arrives. Not sure I’ll be doing any MakerFaire or other demos, etc that will require it anymore.

I would feel that longer life from a cartridge could be expected, buuuut, as a desgn engineer I also understand that a unit that can literaly grab 99.99% of the particles has to be one very fine filter. That does not add up to something with a really long life - especially if it is not physically huge. Too bad you can’t reverse flow it to clean it.
I am venting my 'forge externally… Good Luck, hopefully you have found the cause of your overheating problem.

I also understand that a unit that can literaly grab 99.99% of the particles has to be one very fine filter.

The only hope of extending filter life is another not as good (or expensive) filter that removes 99% of the particles first.

yeah, that’s an idea… anyways for me it’s still “blow that smoke outside!!” Waiting to get hit with a carbon tax of sorts LOL (Canada loves grabbing money for stuff. ) Humour only - not trying to start something:)

Thank you for letting me know that the trouble clears up when the Compact Filter is removed. Would it be possible to obtain a picture of the filter, as well as the bottom of your Printer Head so that we can narrow down what may be causing the Air Assist Alert and ensure the filter is not full?

Once I can review those images, I’ll send over the next best steps.