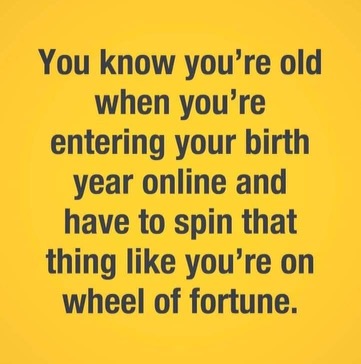 I used to put 1900 for my birth year whenever signing up for stuff…some places won’t let me do that now, it’s an option, but it errors out

Guess they figure nobody on earth is 121 years old.

“You know your old when you go to bed fine and wake up injured.”

It’s really weird being the same age as old people…

Went to the doctor today - first time in a long, long time. I had to draw the clock, remember the words and discuss my falls. Old used to be a lot older.

The first time I felt old was when I went into a Shakey’s Pizza Parlor and I saw the date on the “you must have been born before this date” sign in order to buy beer… and the date was after I graduated from high school. It was a rude awakening, lol!

My first realization was at a paintball party for my son’s friend, so all the boys had their dad in tow. the outdoor area had different topographies set up, and after completing one the group would move to the next one.
A man assigned to our group would describe the surroundings, and each time he would add “You older guys just hang back here with me.” Like the third time we changed battlegrounds and he said that I noticed he was looking at me.
I hadn’t thought about it, but I surveyed the group of dads - and I realized I was the oldest man there.

Well, I have always been competitive. In Bootcamp, I ran the second-fastest time ever recorded on the obstacle course. I restrained myself from challenging the guide to a little one on one, but we all had a great time. At one point I was exposed and ran for cover, diving into a trench at a dead run. I think I broke a couple of ribs. If it had been live ammunition that was the right move, but not paintballs.

Ouch! When I was in the army, my mantra was, if the minimums weren’t good enough, they wouldn’t be the minimums.

I know I couldn’t pas the current army fitness test. Have you read about it? Much more practical and real world.

Is it? I spent most of my time trying to get the soldiers in my unit to pass the run. My last PT test I had maxed out (score was technically 333-officially 300…I only know cuz I still have the awards). I was not as fast as some of the fit guys back then, but I used to max out the male’s run for 17-21 year olds.

Now…I can probably do…half a push-up.

I have the luxury of not living near anyone from my past. So I don’t have to compare ages. Age awareness makes you older. Kind of like Scrodingers Cat. Reality can be anything until you open the box.

About 5 years ago I went with my son to pick up something off of Craig’s List. Turns out the seller was a woman that was in my first grade class. We talked for a bit, loaded the truck and about 2 miles down the road my son said, “Wow dad, she was in your class? You’ve held up really, really well.” I’ll keep that thought.

That’s half a push up more than me! 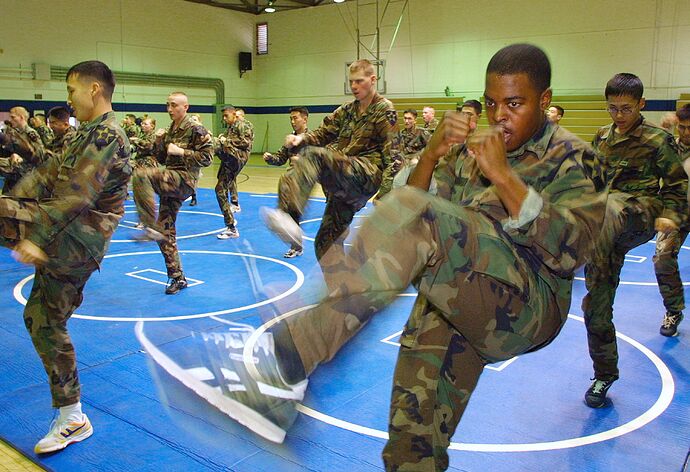