One reason I'm happy I bought a Glowforge

Just my thought of the morning. A while back, I joined one of the Facebook laser cutter groups, for some perspective from outside the Glowforge bubble. This is my first laser, so I’m interested in people’s experiences both with K40-style machines as well as the ones that are way out of my league.

A surprising number of posts are along these lines… 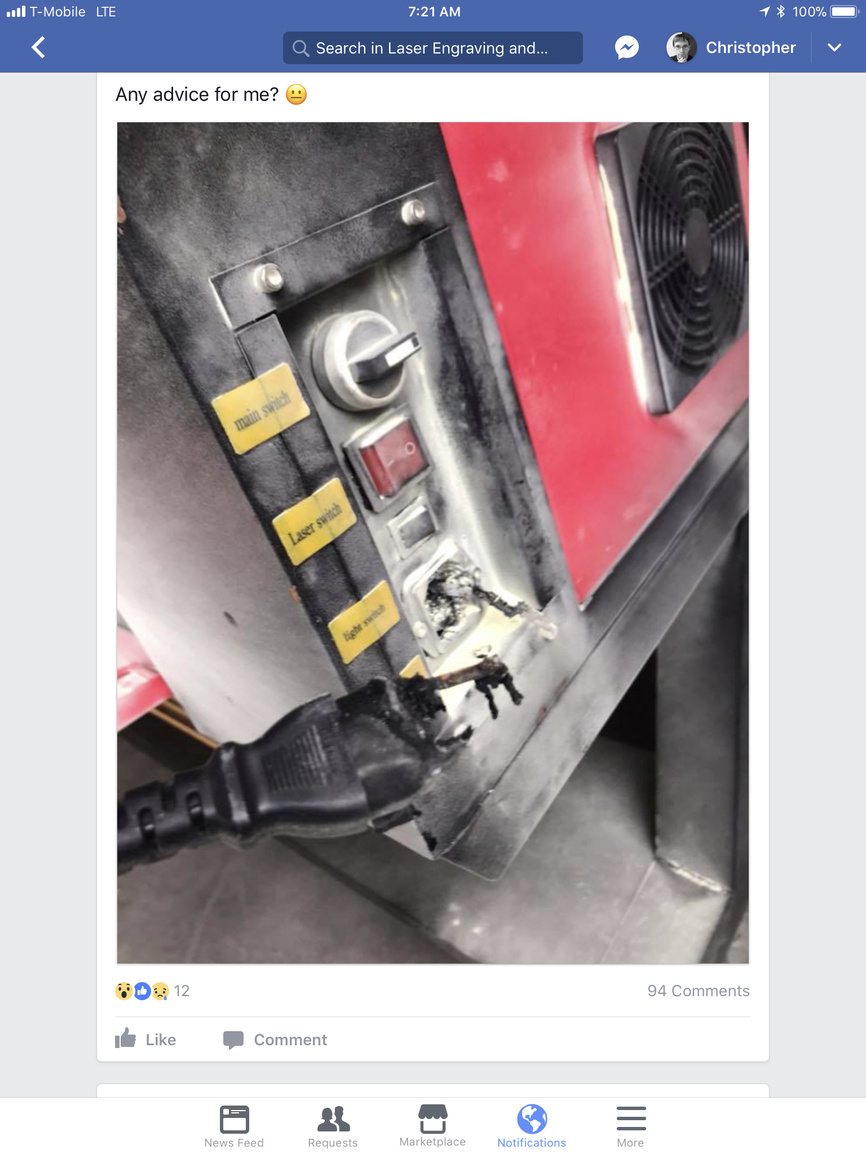 And even more interesting to me are the comments, almost all of which are some variation on “that happened to me too” or “of course it started on fire, everybody knows you have to replace the wiring it comes with”.

Don’t get me wrong, I think there’s a place for being able to get a hobbyist machine at a hobbyist price, knowing you’ll have to put more work in to keep it running well. But I’m rather happy that I didn’t have to think too much about whether it was safe to plug mine into the wall without replacing the power cord and internal wiring, or risk burning the house down.

I think there’s a place for being able to get a hobbyist machine at a hobbyist price, knowing you’ll have to put more work in to keep it running well.

Totally. Ya gotta know what you’re getting into. My brother got into 3D printing about a year ago never having any experience with it. He now owns a 2nd, much better unit. Both units have required part replacement and a ton of tinkering to get them up and running in the first place. Being an electronics and mechanical engineer, he had no problem examining components, understanding what they do, testing, and replacing them. He was also able to improve quality and safety by adding components be thought should be necessary. But that’s him. Me? I can’t be happier with my Glowforge purchase. It’s exactly what I want.

I haven’t used other lasers. I’d rather spend my time coming up wiht designs and making them than fiddling with the machine.

I fully agree with you. Back in my younger days, I probably would have preferred a K40 that I could tinker with. Now I want something that I know will work right out of the box. But I can’t currently justify the cost of a name brand laser. Glowforge was the right choice for my needs.

I saw that photo & responses on FB too, and the first thing I wondered was how many of those same people have badmouthed GF and/or the people that have bought them. Meanwhile mine has worked trouble-free out of the box, and I don’t live in constant fear that it might burn my house down.

saw that too. and i’m happy that my primary “fear” is my own stupidity, not poor construction and/or low QC standards.

i want my projects to be the things i cut, not the thing i cut with.

I can’t find the unboxing writeup I was looking for where the guy unboxed his Chinesium laser, put it all tougher and promptly cut a hole through the bottom of the machine into the surface of his workbench.

But this is a good writeup.

Don’t get me wrong, I think there’s a place for being able to get a hobbyist machine at a hobbyist price, knowing you’ll have to put more work in to keep it running well.

️ The K40 is a $350 firestarter. Sometimes that fire is a teensy tiny little spot that creates a nice engraved bit. Sometimes it’s the whole machine.

There is less than zero safety consideration built into them. Nearly all require safety features added on after the fact by the user. Interlocks, air & water/cooling monitoring, etc are commonly needed across the board. On the electrical side you really want to look inside to see what the wiring attached to - often it’s nothing, sometimes it’s cross wired, etc.

But it’s a really good tinkerer’s box. You can juice anything up to match your thoughts of how things should work.

But it’s a really good tinkerer’s box. You can juice anything up to match your thoughts of how things should work.

This hits the nail on the head. I have a buddy that would NEVER buy anything that he can’t tinker with. That’s the fun side of it for him. But I just wanna make cool stuff and not worry about the guts.

i was a member of a metalworking email list years ago. It was just crazy. There was a long thread about buying the harbor freight hand held bandsaw. and ALL of the stuff these guys were doing to make it useable.

I was like Guys… spend the money, buy a porter cable portaband, and then MAKE STUFF, don’t waste time fiddling around trying to upgrade a cheap tool.

that kind of thing went on and on. They should have renamed the group to. We are @#@#@# Cheap and want to whine and talk about how much work we have to do to make our cheap tools functional.

Me? I prefer to build the things I want to build. Table that rolls over my Table saw. as one project to mention.

I’m all kinds of into tinkering. I bought one of the original Ultimaker 3D printers, for example, and it is still running strong, now with a heated bed, upgraded extruder, and other modifications.

Dammed happy to have bought a turnkey solution.

(A) I like my house like it is. Not in ashes. We had one involuntary remodel caused by the neighbor’s house burning to the ground. Not going to have another.

(B) I like being able to see. Powerful lasers are scary in how fast they can blind you and you don’t even know it until a few weeks later when you hit that pole that you didn’t see while driving. I remember being at the Smithsonian and they had an NN watt CO2 laser demonstration where they fired a continuous beam through a polished salt lens. Worked great. Until they spritzed just the tiniest bit of water on it. BOOM. Molten salt everywhere from an energy source you couldn’t see.

You may wat to mark that link nsfw. There is a naughty engrave at the end.

They should have renamed the group to. We are @#@#@# Cheap and want to whine and talk about how much work we have to do to make our cheap tools functional.

You ought to meet a BMW riders group. Cheapest thing on the bike is the one holding onto the handlebars

But what’s funny is that only applies after it leaves the showroom.