So today just starting this nonsense.
Just doing a good amount of work like usual running the laser like usual nothing new nothing too crazy that it hasn’t already done.

All of a sudden I went on to do the next project and blam… Orange button. I read the alert on the GFI and it I was like ya know what I get it. Today is the first warm day of the year. (I live in N. Indiana and up until today it had been relatively cold; 30-50 degrees, but today was 84 degrees) So I understood the situation, So I went ahead and put a fan next to it to help out and get it cooler.

Now It seems that I am stuck in “Calibrating” and no matter what I do It won’t start… I’ve gone and unplugged it and plugged it back in and no good. No matter how many times I restart it, it wont’ go further than “Calibrating.”

I own a Pro Model. Need immediate help, I run two businesses off my Glowforge and have orders to fulfill.

Not sure where you are operating? In a home, office, basement, or garage? If you aren’t in a basement … Do you have air conditioning? If not, could you run a window unit in just that room?

I’m operating in a home. with a window. But i don’t think it’s the temperature would be a problem. If it is I can fix it but that would be another headache and if that’s the case. Since we’re approaching heat with the temperature rising nationwide. Glowforge will be seeing a lot more Problems and tickets in this thread.

Well, what’s the temp in the room?

Hmm do you know of a Window Unit that I would be able to install whilst at the same time having ventilation in a room like this? 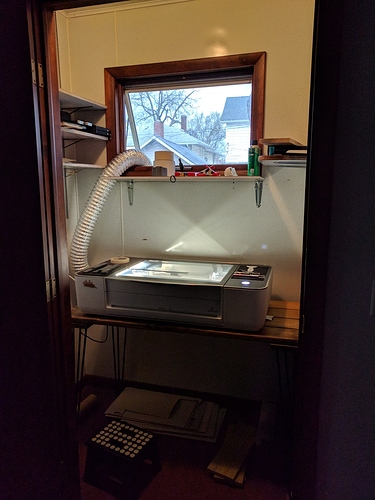 Have seen a few posts where people have cut a board with an opening for their exhaust. With your window maybe a portable a/c instead?

Yea those are great! But I’m still stumped as to how I’d get a window unit and a hole for ventilation on a Winding window unit.

Would a hot room cause it to be stuck in Calibration though?

With your window type, I think you’d want a portable a/c unit instead. If it were me, I would cut a board that fits the window opening (with a hole for your exhaust pipe). This would help prevent more heat from entering the room. If the room has a door on it, it would probably cool off faster to close it also.

Actually, most small window units have these little acordian panels that expand at the sides to fit it to the window. That window looks pretty wide, and those would be easy enough to cut a hole in to run the hose through.

Once your filter arrives it’s a moot point anyway - you just need to come up with a temporary solution that will work with the venting.

Might be easier to go with the portable unit - then you could move it where you need it later.

Ever since I received my Glowforge I have not had one single ‘calibrating’ situation that lasted for more than two minutes. That is until last week after a particular long engrave. After that I simply could not get the machine to calibrate using all the previous tricks I’ve learned from this board. That is until I took a look at the camera lens and discovered that it was completely covered in dust. One quick cleaning of just the camera lens put me back to one-two minute calibrations.

Reading this thread, I see that the issue not only started after the temperature issue, but also after a fan was introduced to the equation. If the button is no longer orange, is the camera lens clean?

Hmm do you know of a Window Unit that I would be able to install whilst at the same time having ventilation in a room like this?

Instead of a window unit get one of the portable room units. Then take the hose fromthe portable unit (hot air exhaust) and the GF hose and put them out the window. I did that in our Makerspace.

Portable A/C could work as @jamesdhatch says. Make sure to seal the window exhausts. A portable unit exhausts hot air out a duct. That air has to come from somewhere. Unfortunately the window would be the easiest source of the air with it’s smoke if not sealed. The preference would be to let the air naturally come from another room.

Great suggestions everyone! We do have a basement here in Indiana, where it stays really cool.

What warnings/hesitations would you guys have for me with operating my laser down there? I do have a way to vent out a window from my basement, not an issue. I have a humidifier down there to keep things nice and don’t have any bats or rodents here.

That sounds like a perfect solution especially with an easy way to vent. You’re going to get your best results in a consistent environment. Neither materials (like wood) or the laser like changing environments very much.

I think both @rpegg and @jamesdhatch work from their basements. We don’t have basements here - sorry

Have a Pro in the basement with a vent through the block wall. Keep it about 55F in Winter when running, less than 75F in the hottest part of Summer. A little humid but no moisture. Never had a pause or an issue.

What warnings/hesitations would you guys have for me with operating my laser down there?

I’ve been running a GF in my basement for over a year. In the winter it’s cool (60-65) but in the summer last year when we hit a spell of 90+ it got into the 80s (I insulated the basement pretty well when I finished it off so it doesn’t get the natural cooling of the earth around it and the thermal mass of the concrete walls). That was an issue with lasering and why this summer it’ll be going upstairs into one of the kids’ rooms (he’s graduated college, has his own company, I think it’s safe to turn his room into a laser den) where air conditioning can keep it nice and happy.

In the basement I needed to run a de-humidifier though as otherwise it gets uncomfortable down there in the summer. I keep it at about 40% relative humidity.

I see, I have what they call a “Michigan Basement” It has carpet on the floor and just has the standard basement walls. It’s been pretty cool down there but going to try. I guess that that… for now thanks guys!

You’ll be fine. That’s what rpegg has. Without aux heating/cooling, an insulated basement is not necessarily a good thing

But until I put the GF down there it wasn’t used for much of anything but storage so it was fine. Now that a GF lives there I either need to a/c it or move the GF upstairs. Easier (and cheaper) to move the GF this summer when it gets hot.

Your Glowforge Pro features a closed-loop liquid cooling system that uses the air from the room to remove heat. It’s boosted by a solid-state thermoelectric cooler that allows for heavier use at higher ambient temperatures than the Basic. It is designed to print in an operating environment between 60 degrees Fahrenheit (16 Celsius) and 81 degrees Fahrenheit (27 Celsius). Printing outside these ranges may cause your unit to pause before starting, or to pause periodically during the print for cooling. This isn’t harmful, but it can make your print take a little longer.

You can try any of these things to improve warm-weather performance: