Okay, here’s a weird one. This morning when I started running my first laser cut job of the day the time to print listed twice as long as normal. I wondered if that was a new bug in the time estimate system & started the job running, but my glowforge began cutting every path twice.

I paused the job, went back & checked everything again. Only one pass was selected, and nothing had changed from when I ran this last night. I had to cancel the job as i don’t want my poor glowforge trying to cut through the crumb tray. I tried toggling the paths to match the behavior, but that only resulted in attempting to cut the paths four times.

So, I need help. I can’t get my glowforge to stop trying to cut every path twice. This worked 12 hours ago… I guess something has changed.

Does it do the same thing on a new file? Try creating a file with only a simple square. If it cuts twice something is up, if it cuts normally, something else is going on.

The square only cut once… (checks paths in the troublesome job)

Well! All the paths in my troublesome design job have been doubled. This is very odd. The duplicate is exactly lined up with the original too, so it wasn’t created by Copy-Paste. (I have no idea how to replicate paths in place as that isn’t an option on the Glowforge Dashboard.) I guess this is still some kind of strange bug which has arisen. At least I can get around the problem now. Thank you!

There are dozens of threads discussing this. In Inkscape terminology, if you convert strokes to paths, you get an inside and outside path, which at the scale we usually print at, looks like it’s printing the same path twice.

You may have a different issue but that’s usually what it comes down to.

That’s not what happened in this case, as the problem occurred inside of the Glowforge Dashboard, not in Inkscape.

If you still have the design that caused the problem, can you export it and share here?

Would be curious (and a learning experience) for us…

Okay. Here is one of the paths which magically replicated its self. I note that one of the replica paths is separated into sub paths, while the other is grouped. 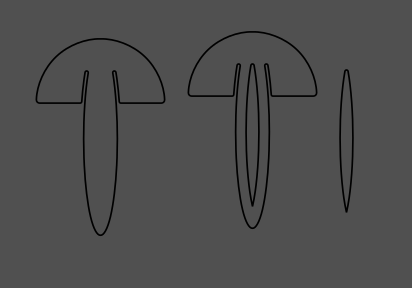 You created this in the GF UI? How did you make those shapes?

I draw in Rhino CAD, then clean things up in Inkscape. This file has been in use for months without problems. Today it mutated spontaneously /inside/ of the Glowforge Dashboard.

Good to hear you have this sorted out. Now about this:

If you weren’t joking don’t worry. The tray is metal. The laser can’t damage it.

That’s super weird! I’d edit your post subject line because from a distance, it looks like a file prep problem.