When I first leaned that a pause feature had been added I thought great, just what we need to help with fine detail cuts. I wanted to make a detailed decal using tacky shelf paper. It is a two stage approach. One is to cut out certain parts then second run a score that only cuts through the vinyl but not the sticky backing. Then use tape to lift the vinyl and place on a model. Remove the tape then BAM!!.. done.

So here is the issue… When working on the fine cuts the material left behind can often lift and move into other areas of the job due to fan air flow across the surface. So when this happens it can fall across an area that needs to be lightly scored. This screws up the entire job due to not scoring or cutting through depending on the action.

I had a large piece move over a score line… So I hit pause so as to remove the offending piece. I assumed that I could life the lid then resume the job.

NOPE!!! it reset the entire job… SO GF… PLEASE allow one to pause then lift the lid make a change, whatever then close the lid and hit pause again to continue… Otherwise PAUSE is pretty much useless unless you want to pause to for a smoke, answer the door bell or similar. Its a really simple fix and would make the PAUSE feature very useful. Hope someone will take action on this… Thanks 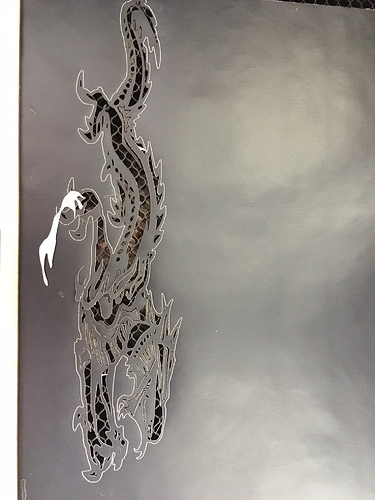 PLEASE allow one to pause then lift the lid make a change, whatever then close the lid and hit pause again to continue…

only cuts through the vinyl

Cutting vinyl not good. what does not eat your lungs will still be bad for the machine works, even in tiny amounts.

As for pause I brought it up within the hour that it was initiated and was informed that it was not in the offing for several technical reasons. However you can do the job in several steps. By using the focus tool in the same place before each step it will keep the same settings as you turn layers on and off ignore, allowing you to open the lid between steps. I would double check the “vinyl” and make sure it is not actually vinyl. however.

But at least by breathing the hydrochloric acid into your lungs, you are at least protecting the Glowforge!

Thank you for the PDF file.

Thanks for sharing the design–but as noted, the “tacky shelf paper” is dangerous (toxicity) to laser cut for you, or anyone that may be in the area of the exhaust! There are vinyl sticker materials that are designed for safe laser cutting available.

And for the lifting/shifting of light weight material during cutting, many use Sekma mats to keep the material in place during the process.

I agree with the wish to pause and be able to open the door for a quick adjustment and then “go” again where you left off, but I tend to agree with SAFETY FIRST. One reason that opening the lid cancels & resets everything right now is for safety reasons for the user–and the machine.

Thanks for the heads up … Regards safety… What is unsafe when the GF is paused… Simple coding to disable the laser when lid is open and only enable when lid is closed and re hit pause to start again. Many times in the past a pause and open lid feature to adjust something would have been a great time and material saver. Just seems silly to reset and lose everything for the pause feature.

More to the point, it’s not really “Pause” at all. It’s really “Abort Job by opening lid”. GF could easily fix the problem by changing the name.

You can pause, the feature is appropriately named. Press the button and the machine stops so you can walk away for a while. Come back, press the button, and the job resumes.

It’s not designed to allow you to open the lid. It’s designed for you to suspend a job while you can’t monitor it.

Ah. Well in that context I guess “Pause” still makes sense. You gotta go to the bathroom in the middle of a long run, I suppose you’d be grateful for the peace of mind.

Still, I think a more practical use of “Pause” would let you reach in to the machine to, for example, clear an obstruction so you can save a job that would otherwise be ruined. That’s for sure the thing I’m looking for.

My technical opinion on this is that the problem lies with the insistence on using “cloud” based software. EVERY other laser I have used to date (and there have been a few) has a start/stop button or separate start and stop buttons (Epilog) that allow for stopping and restarting from the point you stopped even if you lift the lid. All of these machines I speak about have your design sent to and stored on them directly instead of to the cloud and back. Every time you need to do something, the Glowforge cloud effectively has to resend the files all over forcing a complete start from scratch. I have to be honest that I’ve never been a fan of “any” software that runs in the “cloud” since it takes away control of the software from me.

the problem lies with the insistence on using “cloud” based software.

What is unsafe when the GF is paused

Nothing is unsafe with the glowforge when paused. The material you are using is inherently unsafe in any laser. You are generating HCL and it will eat away the insides of your glowforge and this is not covered by warranty.

EVERY other laser I have used to date (and there have been a few) has a start/stop button or separate start and stop buttons (Epilog) that allow for stopping and restarting from the point you stopped even if you lift the lid. All of these machines I speak about have your design sent to and stored on them directly instead of to the cloud and back.

Note that the choice to make the pause button work the way it does has nothing to do with the cloud nature of the Glowforge software. It was an intentional design choice on the part of the company regarding safety and ease of operation.

They don’t want people to do certain things while paused:

It may be disappointing that the utility of the pause feature is diminished by the need to reduce the number of complaints handled by the product support team but if you put yourself in their shoes you can see why they want to avoid these sorts of issues before they can become problems for inexperienced and less knowledgeable customers.

Perhaps someday we get a “yes I really know what I’m doing” setting but I doubt it’s a high priority.

A Laser Cutter is an inherently dangerous machine. Besides the hazards to your vision, lasers can set the workpiece on fire, and lasing material can generate extremely toxic fumes if the wrong materials are lased, and mildly toxic gases even when approved materials are used. Glowforge trusts their users not to screw any of these things up. They deal with it by providing a list of things to not do with your laser cutter. “Don’t run the laser cutter without proper ventilation”. “Don’t leave the GF unattended while it’s lasing”, “avoid staring directly at the laser even when the lid is closed”. “When the printer is paused and the lid is opened, do not move the printhead or the material on the bed or swap out materials entirely” would seem to cover these risks as effectively as all the others.

Also, if they leave the steppers powered when the lid is opened, it would be very difficult to move the print head. The Steppers on my CNC are about the same size as the steppers in the GF (like a NEMA 17 maybe). If my CNC steppers are off I can spin the knob on the back of the motor by hand easily, it even coasts a bit if I spin it hard enough. With the motors powered, I have to crank really hard to overcome the motor torque and move the motor.

To be quite honest, if I could open the lid and add something or move something and continue the job, it might open up some additional design possibilities. But the biggest reason I would like a real Pause is that I often cut thin foam. I used to use small magnets to hold the pieces down so the assist fan didn’t blow them out when they were cut free. But a recent update to the GF fan control has eliminated that option. If a piece gets lifted out by the fan after it’s cut free, I want to stop the printer, open the cover, remove the loose piece, and resume the job. I can’t be the only one who could use something like this… So I’ve had to add webs/sprues to all my parts and cut them free with an Xacto after the print is completed.

This topic was automatically closed after 4 days. New replies are no longer allowed.