My step father in-laws birthday is Saturday. I made an engraved cutting board as my first project a couple months ago with the millennium falcon on it. But decided I had to do something more. His license plate is below. I copied it with help from google images and some photo shop to create a matching cake topper. My only regret is using an actual license plate image. The bottom right of the cake topper is not clear, because there was a shadow in the image. Another lesson learned.

Fortunately I did learn from my last acrylic lesson to invert the image and engrave on the back. 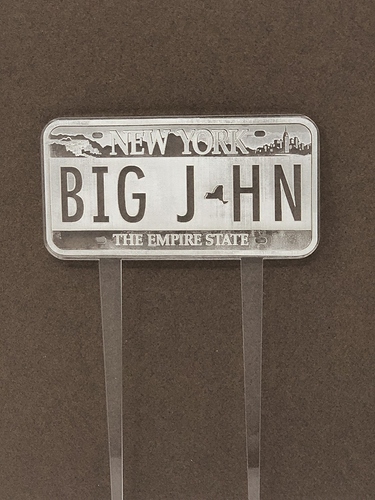 Great work very inventive! I personally think the shadow adds something to it, makes it look more realistic somehow, if that even makes sense?

This is really neat! Great idea!

Excellent! I predict he will love it!

What a fantastic idea for a cake topper! (Might have to borrow that idea for DH next year, he’s impossible to surprise.)

That is an ingenious idea! The shadow only makes it look more realistic.

Dear Husband. (Generally, although I do understand that depending on context, that “D” can stand for some other word.)

I spent a few years on a scrapbooking forum that was 99.999% female. (There were 3 very intrepid guys and about 14,000 gals. We came up with that abbreviation. (And no one ever had a bit of trouble interpreting the meaning at any time.)

Yep I was in a local and a remote scrapbooking group at one time ---- DH was a common expression used online AND on our weekend get a ways … depending on context you could always tell which word the D stood for. walk down memory lane…

Dear Husband. (Generally, although I do understand that depending on context, that “D” can stand for some other word.)

In male dominated forums such as the Dodge Hellcat one I frequent, the term for wives is “SWMBO.” “She Who Must Be Obeyed.” Generally used in a passing reference to the partner placing spending limits on guys who would readily dump $10,000 in speed parts into a $5,000 car.

“She Who Must Be Obeyed.”

Most of my cohorts use the term “The Pentagon”

the term for wives is “SWMBO.” “She Who Must Be Obeyed.”

Hum, who here uses SWMBO quite a bit?