I started having problems with this yesterday. I was printing fine most of the day. Then when I went to print it wouldn’t go past the preparing your print screen. Here is what I have done.

Restarted all devices.
reconnected the GF
deleted cookies and history
logged out and back in
divided design into steps

after all that I got it to where it gave me the option to print. the screen would get stuck on loading then I would get a print stopped message. when I went to try again it said my GF is offline. And I have been stuck there since. Please Please help! I have a large order I need to complete and I am running out of time.

Offline status is the key, I would think. Sounds like you’re having WiFi connectivity issues. Easiest way to test and isolate that issue is to set your phone on the Glowforge and connect it to the hotspot (providing you have cell signal).

I just tried that and it is still showing as offline.

Just to clarify, you held the button down, entered WiFi setup mode, and connected the Glowforge to your phones hotspot, and successfully connected to it?

Yes. And actually now it doesn’t say offline. Now I am once again stuck on print being prepared. 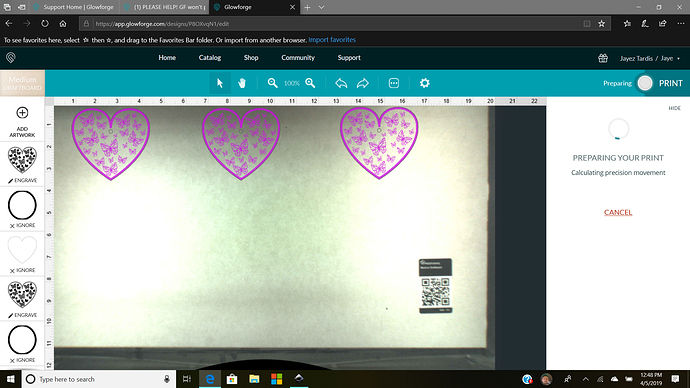 Are the butterflies vector? If those are vector and you rasterize the image, you might find that it loads in a snap.

I honestly don’t know what happened. but it is now printing again. I didn’t do anything different. I just hope it continues to work and I don’t end up in this mess again. Thanks for the tip on the butterflies! this print should be done in about 40 minutes. then I will see if it will work again. Wish me luck

Honestly, it sounds like a connectivity issue. That’s not saying that your WiFi is bad or that you are doing anything wrong. Good ISP speeds, perfect connectivity to other devices, close proximity to a router, etc, do not necessarily have anything to do with whether the GF is happy with the WiFi. It seems to be more persnickety than most WiFi enabled devices. Less forgiving. I have had a Pre-Release unit or a Production unit since early 2017. They both easily connected shortly after initial power-up and have NEVER dropped off line. Other folks have persistent problems. Wish I knew what the differences were. But if it is an intermittent connection you are likely to see the problem again.

It’s looking like that is the case. As I am once again stuck at preparing.

(Had to say it that way because it rhymes.)

There seems to be a pattern. I’m able to engrave 4 hearts. then print again right after to cut. After that it takes about a dozen or so tries before it works again. Engraving takes about 40 min. The cutting another minute. That’s it. Could this be a cool down issue?

I have been unable to print since my last post yesterday.

With a cool down the Print button will turn orange. Should also give you cooling info on the user interface if you have connectivity.