I failed to tell people when we moved into the current home (with a pool) that they needed to bring their own towels for swimming.

Yesterday my son pilfered my towel … which I quickly replaced with his towel from the night before. Engraved these clothespins to add to the line in the sunporch. 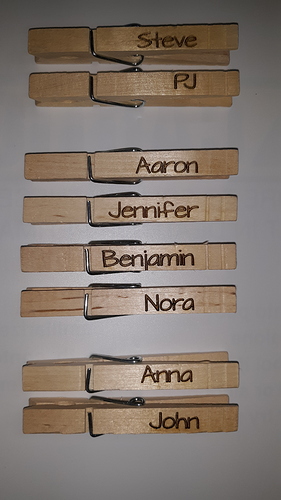 Awesome! (Where’s my name…I so feel the need of a dip right now, and we lack pool.)

Yikes! I can’t believe I forgot yours!

So simple, but so effective!

Love those! And, what a simple idea made into something fun and functional. I hear you about the towel thing. We have an above ground and I’ve finally trained my four grandsons to take a basket of towels directly to the basement after swimming and put them in the dryer. We don’t have a space on the deck or near the pool to hang them to dry…there are too many of them, too. Then, when they come back, they now know to go directly to the basement and bring the basket of dried towels back up and onto the deck.

You have done well! They are willing to do anything we ask … I’m the one that started on the wrong foot. Also, why buy the huge towels? We used to do that when there was a beach and you needed to sit/lay there on swim breaks.

We’ve tried multiple solutions for towels. Just bought a retractable line, which will make it easier to get it out of the way when we want.

Great solution to a pesky issue!

Now that’s a great idea. A space saving idea. Maybe someday, but eh…probably not. I’m getting too old to be that accommodating. The only reason I still maintain a pool is for those kids, anyway…so they are all now old enough to earn admission. I’ve been the sole ‘pool woman’ (maintenance person) for over 30 years, now. There will come a time perhaps sooner than later when it’s time to throw in the towel…ha ha ha!