Has anyone been able to print Porsche emblem on Glowforge? Every logo I try either won’t engrave or cut. Any advice/help is welcomed. Thanks.

Welcome to the community!

I can point you to some recommended reading

You need a vector to cut and a raster (Bitmap) to engrave. Which design software are you using?
Are you tracing the image?

I use adobe illustrator, I am finding many files I’ve purchased or found free are made in inkscape (which is free) so as soon as I open it I am supposed to save it as an .ai file for a backup.

One thing I have learned by doing is to seperate in layers the operations I need to perform in the order I want them done. This helps me line up my cuts by ignoring all layers and putting the cut to 300speed @1power I get lines and I move the file as needed.
I am still learning. Any logo and especially one as complex as porche (isn’t that a crest w/ 4 separate panels) would need to be created into engrave, etch, cut layers. At least I would do that and I tent to make seperate layers more often so I can leave a portion out of some cuts.

Thank you. I will try what you have suggested.

I haven’t tried tracing the emblem. So, I have to create 2 different files…one for engraving and one for cutting?

I have to create 2 different files…one for engraving and one for cutting?

files I’ve purchased or found free are made in inkscape

Not necessarily made in inkscape, but SVG is a standard transfer protocol that is open source so any mixed vector and graphic software can read. AI is Adobe specific and will include things that would not necessarily transfer and complexities that are just annoying when they do even when it can be read, and not everything can read it.

Layers are a good example. Inkscape allows layers and groups, and clips, gradients, and patterns but the GFUI ignores all of that and it will not show up there. The only relevant way to separate groups out to cut in the same layer is by color. Vectors that are the same color will have their own layer. Also pixel graphic parts will each have a separate layer even if they are all the same color.

Or at the very least different colors. If your logo is entirely vector it’s not necessary to convert any part of it to bitmap, tho sometimes that can help with some file oddities. GF doesn’t care about layers or groups to separate operations, only colors.

If your logo is entirely vector it’s not necessary to convert any part of it to bitmap, tho sometimes that can help with some file oddities. GF doesn’t care about layers or groups to separate operations, only colors.

Well there are occasions to do this actually. The biggest one is where you exceed some magical node-count limit on the vector image for a massive engrave. I’d had this on very large signs, where I had to convert to bitmap or the GFUI puked on the file size (not literal size but complexity)

I made this crest as a gift for a porsche collector. I was not able to find perfect vector version of it, so I did an image trace from a high quality photo and then spent a good bit of time cleaning it up and rebuilding it. sprayed matte black after engraving, then rub-n-buff for the gold and one-shot enamel for the red. 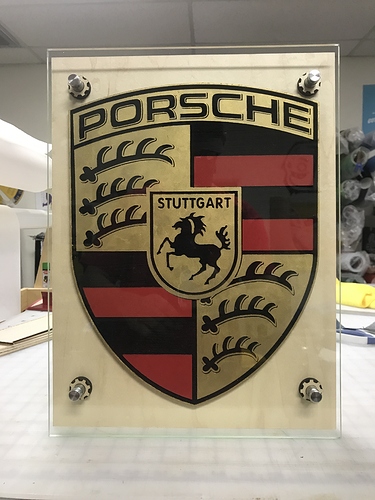 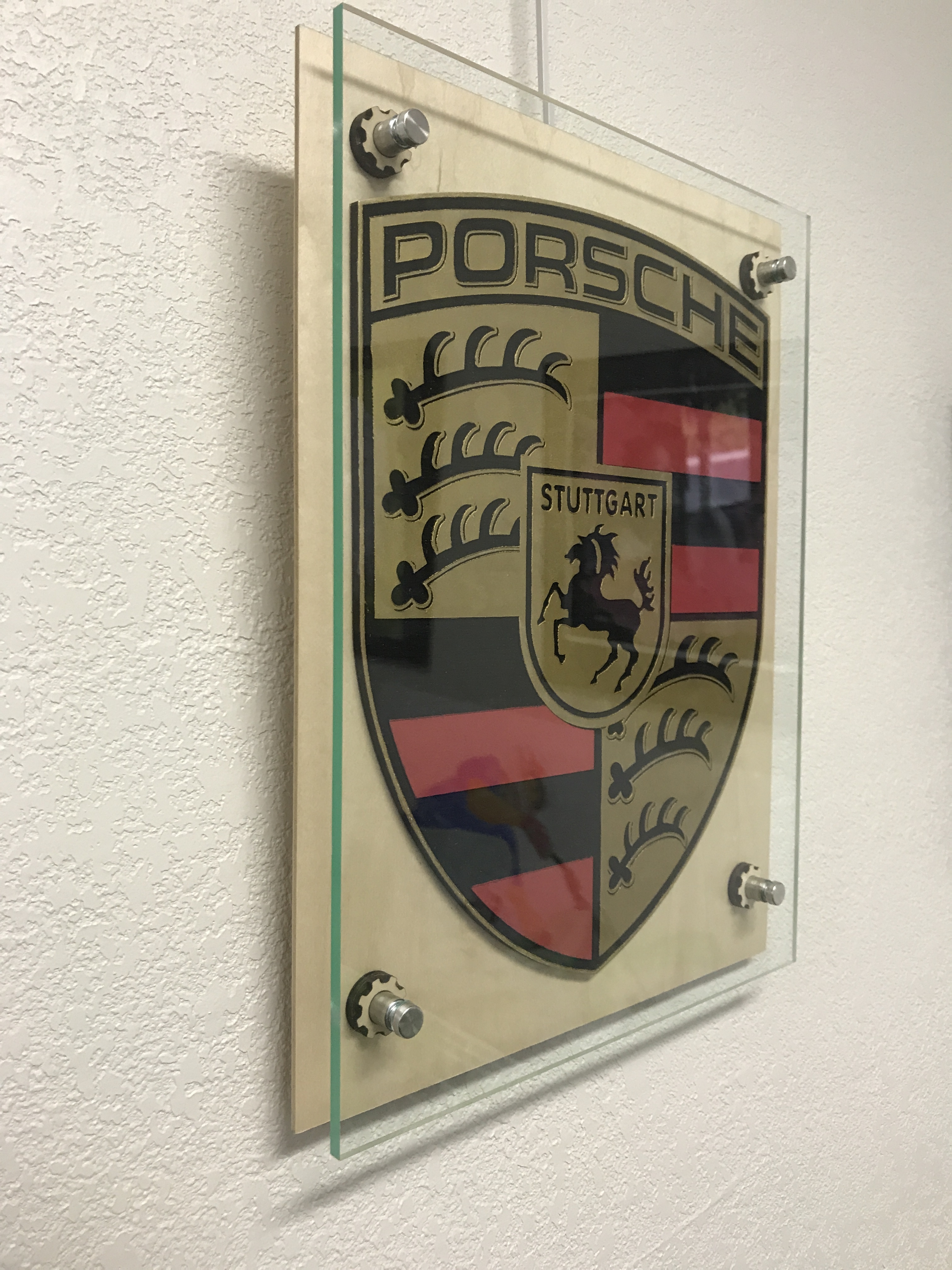 Hi, that is exactly the image I am trying to make. I would like to know more about how you created it & painted it. Did you create it out of wood? What size is it? Thanks in advance for your help

Finished size is 12"x18". (in the first photo you can see the one-inch grid on my worktable) The body of the crest was engraved from thick draftboard, the backer is thin maple proofgrade, and the shield is thick proofgrade green-glass acrylic. I used cheap standoffs from amazon.

If i had planned to paint it from the beginning I would have gone about things differently, but at first I was going for a brand-on-wood burnt look. I wasn’t thrilled with the contrast of the char on wood, so I sprayed the entire thing with white gesso (one coat) and then followed up with matte black krylon (two coats). Next I applied gold rub-n-buff with my finger, and finally did the red. I tried using a paint pen at first, but it was not not giving me the coverage I wanted, so I painted directly over that using a Mack number 2 pinstriping sword and some one-shot enamel.

The design process is straightforward but tedious. I used the highest-quality photograph of a crest that I could find, edited out the background in photoshop, and then did an image-trace operation in Illustrator. Then I went through the whole thing with the pen tool and the smoothing tool, adjusting individual nodes to correct the oddities from the autotrace (i use a wacom tablet: the pen-shaped input device makes this kind of work much easier and more intuitive for me). I replaced the traced ‘stuttgart’ lettering with a close-to-matching font. Finally, I made a copy of the exterior shape, pasted it in place, and made it a unique color to use as a cut-line.

Wow, that’s a lot. How long did it take you from start to finish? How much would you charge to re-create? Feel free to email me: michael28tp@yahoo.com

I had about an hour into the design process, and another hour or so of painting. The engrave took around an hour and twenty minutes. As this is an active logo that is under copyright, I will not sell or re-create it commercially without express written permission from Porsche.

jbv is a pro who uses these software tools for a living. The first time I attempted something similar, cleaning up an image it took hours. Some of those hours are in better learning the tools (Inkscape and GIMP in my case) and some are just in the tedious work of pixel whacking and node cleanup. It can be disheartening working through it the first time, but it does teach you a lot.

Note I would not try before working through several hours of tutorials in your tool(s) of choice. The techniques are pretty basic and there are plenty of tutorials out there.

jbv,
My apologies. It was not my intent to infringe on any copyright laws. I appreciate all of the help you have shared. I was trying to create the emblem on my Glowforge for a dear friend who loves Porsche’s and owns several. I did not realize the logo would be this difficult as I have created other items on my Glowforge with no issues but I am still inexperienced with using my machine. Again, thanks for your help.

on a whim, I just looked at the wikipedia page concerning Porsche. You might want to take a look at the media files there as a starting point. That’s probably what I should have done!

Would this work? I haven’t run it but it looks pretty good on inkscape.

I think it might. Do you have the file?