Processing bug? (Just FYI as I got it resloved)

This happened to me a couple of times tonight. I thought I imagined it the first time, but something definitely weird happened when I processed this engraving and cut job.

It only processed the cut steps and ignored the first engraving step. It gave me a job time on 1 minute. I processed a second time and it did the same thing again. The third time, I selected the engraving image before processing and this time it recognized it.

-I did not physically move or touch anything in the machine to get it to process correctly.
-Notice in the engraving image is greyed out, but it is not set to “ignore” in the list. It seems the machine just did not register that the image was set to engrave. (It was set to 3D engraving.)
-It was not in the out of bounds area on the tray and was within the cut boxes that were correctly processed.

It did the exact same thing on a totally different job a few hours ago as well. 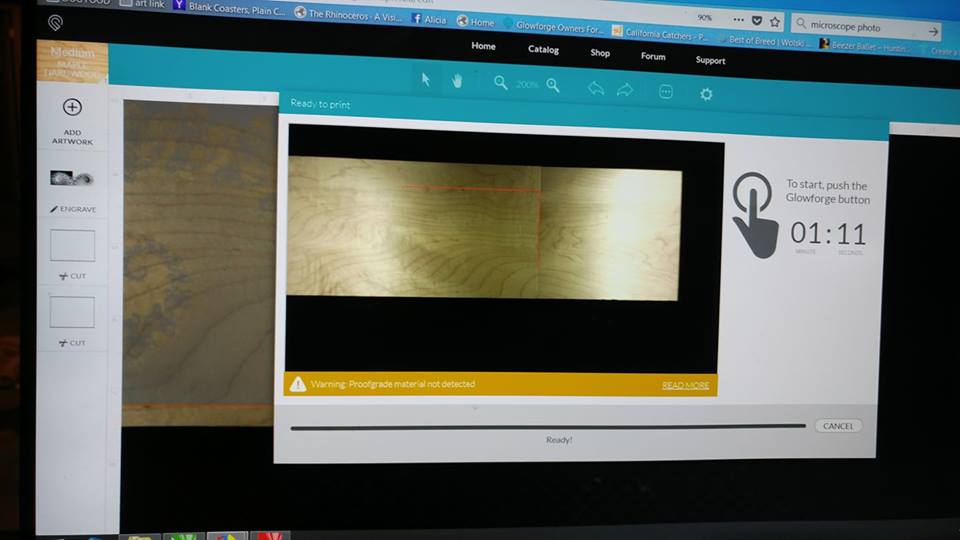 (Now listen up all you technofiles laughing at my pics, notice I am NOT pointing at anything in this one.

Besides, using old school low tech solutions like taking a picture of what you’re pointing at is a sign a great intelligence and ingenuity. I’m pretty sure I read that somewhere.

I had the same issue last night trying to add an engrave to the pendant. Just when I was about to drop a note for support, it started working.

notice I am NOT pointing at anything

Do not pay attention to the men behind the curtains. It is just noise and smoke. Point away if it makes things ‘More To The Point’. (cough)

Anyway…
Lot of ‘new and improved’ engraving features being rolled out and I suspect they are still tweaking them on the fly. Gets me worried, since I am retired and not always on a 9-5 schedule, so what they think is a slow time may be me hard at it time.

I appreciate them having the improvements running full tilt, but if this is the case (program adjustments being done on the fly) I would hope they re-think this and settle on a certain day or time to pump out anything that is not an immediate, must have, hot fix.

Even a daily would suffice to warn us and not catch people mid stream in their projects.
→ We Will Be Making Minor Changes Tonight At 11 to 12 PST ←
Ayup…

If it is NOT them making changes on the fly, then that is scarier.

Now listen up all you technofiles

Gets me worried, since I am retired and not always on a 9-5 schedule, so what they think is a slow time may be me hard at it time.

I think many of us have a certain amount of concern there. (I have a day job, but certainly not a 9-5 schedule.) Apparently they schedule any potential planned downtime around the times where there are historically the fewest prints. Since everything is up more than down, the best way to be certain scheduled downtime won’t happen in your usage time is print as much as you can when you are available.

I’m glad you were able to get it resolved! I’m going to close this thread - if the problem reoccurs, go ahead and post a new topic. Thanks for letting us know about this!