Yeah, somewhat clickbait to call it proofgrade baltic birch, but I think the title fits.

For anyone who has not tried GS2Awards.com and their prefinished baltic birch, you’re missing out. I know it isn’t “proofgrade” in the strictest sense. It certainly doesn’t have the barcode for auto settings, but it matches if not exceeds proofgrade quality. While I’ve used regular baltic birch all the time if finish didn’t matter or didn’t show in the final product, GS2Awards prefinished baltic birch looks good enough it’s become my go-to for most projects. I think they use a lacquer-type of prefinish, hard and clear. They seem to use a high quality baltic birch because it cuts like butter, with engravings in a dark brown. Yes, the cost is higher than just regular baltic birch, but I value my time and anyway, I couldn’t get that level of finish no matter how long I tried. Cost is offset a little with a large order since they ship free over $100.

Like a fisherman who gives up the location to his favorite “hidey-hole”, I’ll probably regret letting everyone know of them, but I’ve laid in a large stock that should last me a while. I use the 1/8 primarily, but they also have 1/4. They also have acrylic, patterned MDF and misfits, but can’t speak to those products.

I wouldn’t have bothered clicking on a thread titled “baltic birch source”.

“Prefinished baltic birch source” is at least as enticing and also more accurate.

“Proofgrade” is a Glowforge trademark.

This stuff looks interesting, but it’s not from Glowforge and is also not masked.

guess I should have used quotes around “proofgrade”. I didn’t mean to imply that this was an official GF product, but to me at least, that term has come to mean consistent high-quality that works well in a GF. And you’re right, I didn’t mention that it isn’t masked, but the finish is such that the smoke just wipes right off without effort. It’s at least as easy as peeling masking, probably much easier if there are many tiny islands to deal with.

I didn’t mean to imply that this was an official GF product, but to me at least, that term has come to mean consistent high-quality that works well in a GF.

PG also means guaranteed by GF, as in if you’re using it with PG settings and it doesn’t cut right they’ll replace your piece.

As I said, it looks interesting. If it was available locally, I’d probably pick some up to try. Applying a finish has cost and is time consuming.

I love GS2Awards! They are fantastic to deal with. I just received notice today that my order has been shipped, so I should have it in a couple days. I would say their misfits are fine, just realize that they will not be “perfect.” I ordered a misfit 3M 6" tape and except for one edge that has a small cut in it, which does not look like it’s more than a couple layers deep and I’m sure will disappear, it’s worked fine for me even with the cut. They are definitely my go-to source as well.

Thanks for the source, I’ll give it a try!

I do use prefinished wood from time to time, but the main benefit of Proofgrade to me is that it’s guaranteed to cut at the Proofgrade settings.

Baltic birch can never have that guarantee since it’s solid veneer all the way through, and any voids in the inner plies get filled with glue that’s too dense for a Glowforge to cut through. If one of your cut lines overlaps one of these spots, it will not cut no matter what speed you run it at.

Plus, baltic birch is going to become increasingly rare and expensive over the next few months, as much of it was exported from Russia.

Here are some Proofgrade alternatives that have an MDF core as well as the same high-quality glossy finish: 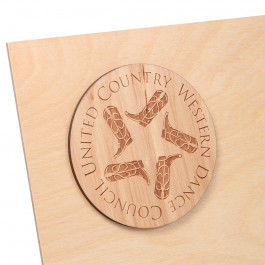 These Maple Laser Wood Laminates have a Fiberboard core with wood laminate on each side which is sanded smooth and finished with a clear coat. Extremely versatile. 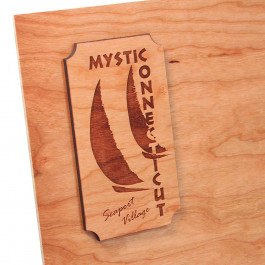 These Cherry Laser Wood Laminates have a Fiberboard core with wood laminate on each side which is sanded smooth and finished with a clear coat. Extremely versatile. 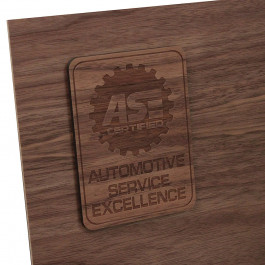 These Walnut Laser Wood Laminates have a Fiberboard core with wood laminate on each side which is sanded smooth and finished with a clear coat. Extremely versatile.

Do note the dimensions, and use code 9PBN11 for 15% off any purchases from JPPlus.

Rockler is no longer buying it, posted on their web site. Selling off what they have. That’s where I got mine, but I’d switched to Purebond for the majority of my wood items a couple of years ago.