I don’t know what you are trying to do with the file, but when I was putting it up as engrave, the entire square was engraving as a solid. For now, I’m going to assume that is the issue. 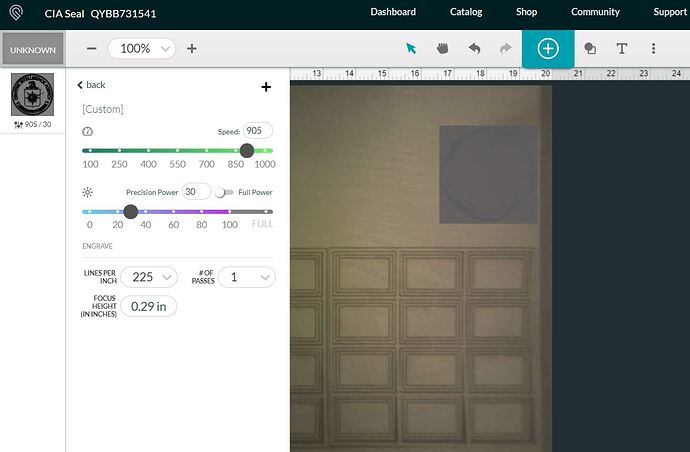 Actually, you must be doing something different too, because even at that, it will only take 12 minutes on my end.

Did you change it from it’s original size of 20 inches?

Do you have a bunch of copies of it on top of itself in the ui maybe?

I went back and was screwing around with it. Accidentally set it to score and actually like it much better. (only took 2:20 minutes, too!) Left is shellacked and right is bare. Still haven’t figured what I did so I will work on it tomorrow. I don’t understand how @CMadok got it to do 12 minutes.
Now I have something to look forward to tomorrow. I’m doing 4 coasters as a gift so for that I’m now good.

I took a look at the file – it’s made up of a bazillion line segments. Assuming the GF software connected them all together into shapes, you’d have gotten a big solid engraved circle with a slightly smaller engraved circle in it, with all the inside stuff engraved again inside of that. It would definitely have taken a while.

Thanks. Any idea how I can salvage it to engrave?

Or you could just score it.

Which I did. And like. I got the file off Etsy, so I wonder about other files from this guy. Engraves use .png .pdf or .jpg, right? So if I converted it to jpeg do you think that would work? I may want to do it on wood and I think an engrave would look better.

Rasterizing it (which is what converting it to jpeg would do) would just engrave the same lines instead of scoring them. It would look exactly the same but take a whole lot longer.

I wonder about other files from this guy.

Yeah, I don’t think I’d buy any more from him. I don’t know how he’s creating his files, but they’re pretty useless for anything but scoring / cutting.

So maybe print it out as a photo, b/w, put it in the GF and trace it?

GF trace probably won’t get the detail…but even if it could, it’s not going to change how it looks. It will still be the wireframe drawing it already is. If you want parts of it to be filled in, you’ve got to have a file with those parts being closed shapes so they can be filled. There aren’t any closed shapes in this file.

What about the trace feature in Inkscape?

You can try it. I don’t use Inkscape, so I’m not sure how it works with tracing something that’s already a vector. It might give you solid lines, but you’re still going to have to do some heavy editing to get the positive and negative spaces you need for engraving.

Yeah. But I thought the file I tried was a .pdf?

No matter what kind of file you export it as, it’s still going to look like a wireframe version of the CIA logo.

Gotcha. Thanks for setting me straight. I appreciate it.