I am completely new to nodes and paths and everything that comes with vector files. I bought this SVG of Bob Marley and Naruto from Etsy and I am trying to engrave it onto acrylic for a LED lamp and onto a cutting board. It doesn’t happen all the time but sometimes there’s a random line that runs across it. I have read some forums and I tried to rasterize but I don’t know if I did it correctly. Can someone please help me?

Welcome to the forum.
If you purchased this file, it is doubtful that you have the rights to share it publicly. I suggest you take the file down, and people will still help you.

To rasterize it, save or export it as a PNG image, and then upload that PNG image to the Glowforge instead. There will no longer be any nodes, it’s just a photo now, so no chance of them being connected by a random line.

oh youre right, Im sorry. I wasnt thinking about that. @dklgood

I did it @dklgood

I did it the way the video showed me. I think I did it right but not 100% sure. Just wanted someone to take a look at the file but I guess Im out of luck

Ok. I snagged them before you pulled them down. Bob Marley is two items. The outline and the image itself. If you have Illustrator, ungroup the two. Then click on just the Bob part of it (you’ll know because parts of the red line will not be in the bounding box.) Go to object → Rasterize. I choose 300dpi myself, but whatever resolution you want should be ok. But make it higher than the LPI you choose to engrave with in the GFUI. Then you can save the file again and it should be good to go.

Same with the naruto file. But there doesn’t appear to be any cut line for those. Just click on it. Go to object-Rasterize. Save it and done.

well I was the one who put the cut lines on the bob. I didnt know if that was the reason I was having trouble with the image. But with the daggers i only wanted to engrave it on a cutting board so I didnt put the cutlines. I thought maybe I did something to the original image that I wasnt supposed too.

You didn’t do anything wrong, but you also didn’t rasterize them. Check your private messages. I’ve sent you links to rasterized copies.

I have Inkscape. I ungrouped them but when I go to object there is no rasterize option. im researching how to do it on here.

OMG THANK YOU. I am a total beginner.

In inkscape I think it’s Edit->Make Bitmap Copy, but I think it also leaves the vector image as well so you’d want to move the bitmap version away so you can see the vector version and delete it. Then you move the rasterized version back to where it was and save.

A good way to tell which is the vector is to separate them and either go to 'View/outline, or just Ctrl+and hit 5 twice. the bitmap will just be a red box with an X through it.

After rasterizing an object with “Make Bitmap Copy”, I’ll hit page down a few times to send it to a lower layer, click again, now the original vector is on top, and I can hit backspace/delete to remove it. This way I don’t have to reposition anything.

I keep a second screen to show all the standard information bars so they do not clog the work area, but the object bar will show all the details, and you can pick what you want from there. If I do not want something in the final output I can poke out the eye in the object list and it stays there but is hidden and will not be considered in printing. 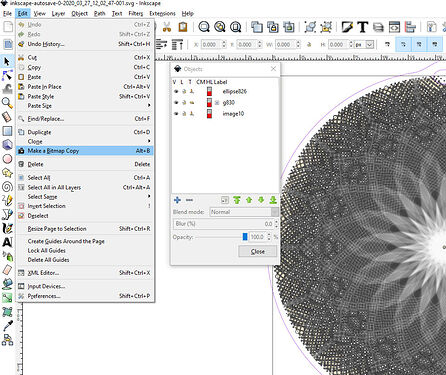 I think we should give out badges for certain things. Node wrangling of vectors is an essential one. These stray lines plague the random vectors out in the wild. Almost every vector I have found on line needs some TLC.

? The status bar at the bottom of the window always shows you the type of whatever object(s) are selected

Hehe, I didn’t know that, thanks for that tip!

If I want to get the exact same engrave effect from a raster image, would I rasterize it to Black, pick Vary Power, and keep Speed 100 and Power 10?

Or is there some other kind of conversion you need to do?